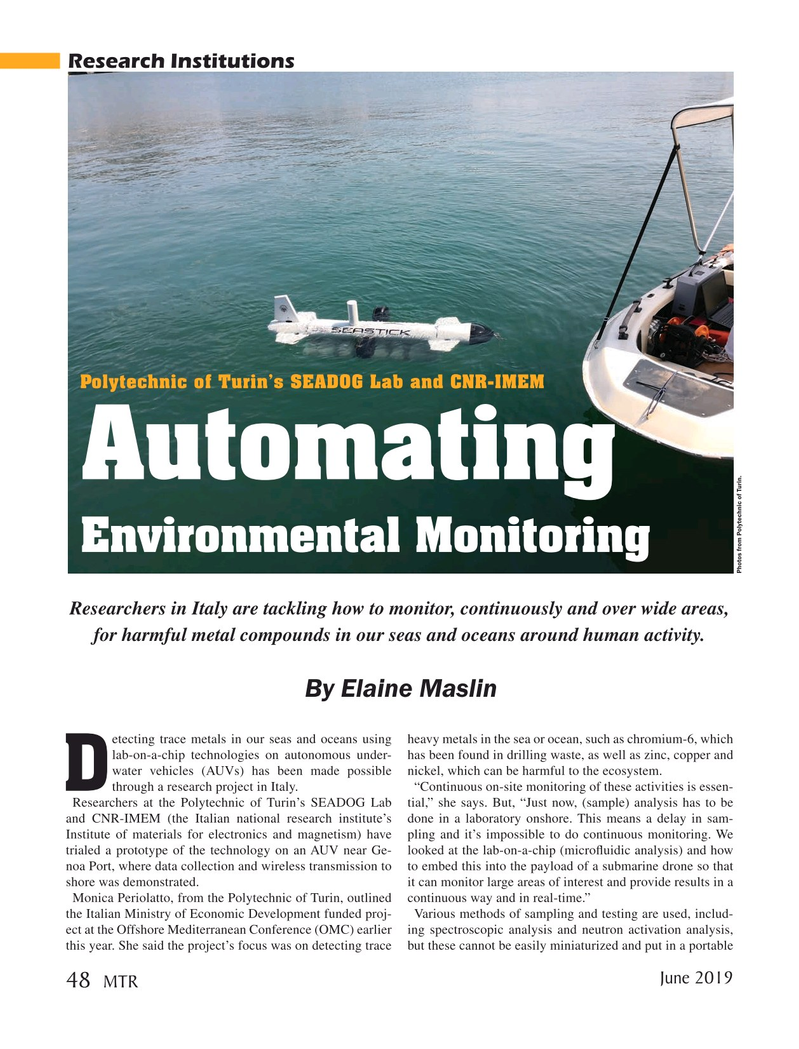 Photos from Polytechnic of Turin.

Researchers in Italy are tackling how to monitor, continuously and over wide areas, for harmful metal compounds in our seas and oceans around human activity.

By Elaine Maslin etecting trace metals in our seas and oceans using heavy metals in the sea or ocean, such as chromium-6, which lab-on-a-chip technologies on autonomous under- has been found in drilling waste, as well as zinc, copper and water vehicles (AUVs) has been made possible nickel, which can be harmful to the ecosystem.

D through a research project in Italy. “Continuous on-site monitoring of these activities is essen-

Researchers at the Polytechnic of Turin’s SEADOG Lab tial,” she says. But, “Just now, (sample) analysis has to be and CNR-IMEM (the Italian national research institute’s done in a laboratory onshore. This means a delay in sam-

Institute of materials for electronics and magnetism) have pling and it’s impossible to do continuous monitoring. We trialed a prototype of the technology on an AUV near Ge- looked at the lab-on-a-chip (micro? uidic analysis) and how noa Port, where data collection and wireless transmission to to embed this into the payload of a submarine drone so that shore was demonstrated. it can monitor large areas of interest and provide results in a

Monica Periolatto, from the Polytechnic of Turin, outlined continuous way and in real-time.” the Italian Ministry of Economic Development funded proj- Various methods of sampling and testing are used, includ- ect at the Offshore Mediterranean Conference (OMC) earlier ing spectroscopic analysis and neutron activation analysis, this year. She said the project’s focus was on detecting trace but these cannot be easily miniaturized and put in a portable