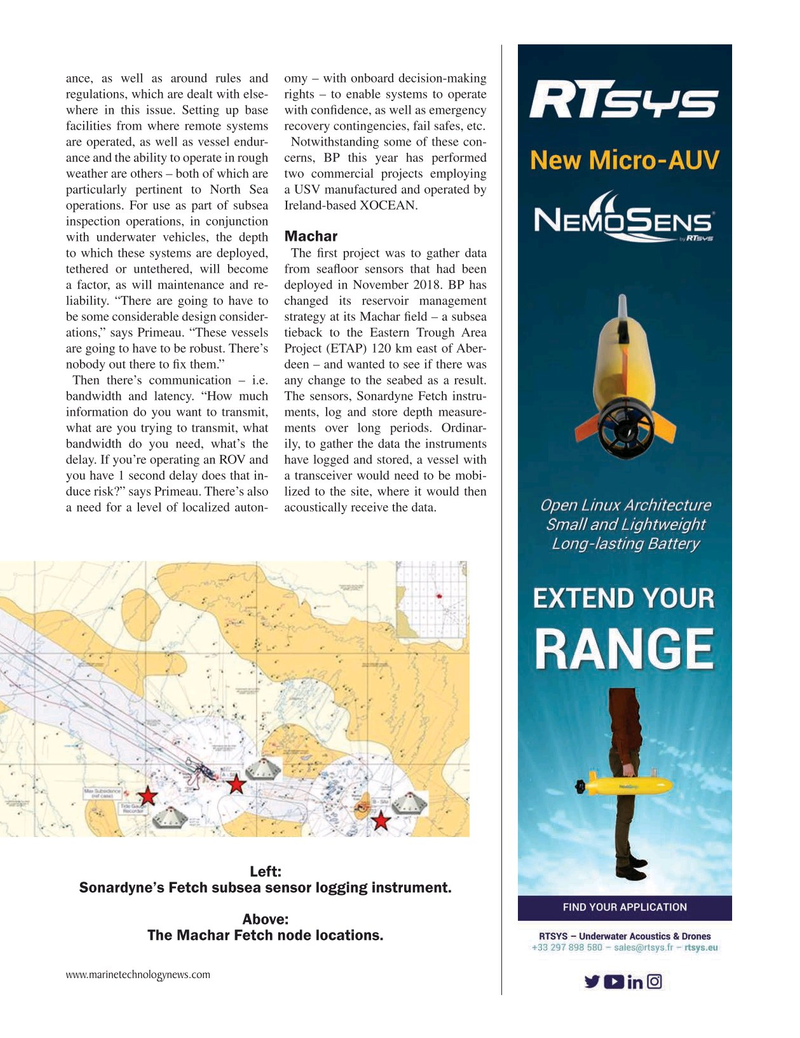 ance, as well as around rules and omy – with onboard decision-making regulations, which are dealt with else- rights – to enable systems to operate where in this issue. Setting up base with con? dence, as well as emergency facilities from where remote systems recovery contingencies, fail safes, etc. are operated, as well as vessel endur- Notwithstanding some of these con- ance and the ability to operate in rough cerns, BP this year has performed weather are others – both of which are two commercial projects employing particularly pertinent to North Sea a USV manufactured and operated by operations. For use as part of subsea Ireland-based XOCEAN. inspection operations, in conjunction with underwater vehicles, the depth Machar to which these systems are deployed, The ? rst project was to gather data tethered or untethered, will become from sea? oor sensors that had been a factor, as will maintenance and re- deployed in November 2018. BP has liability. “There are going to have to changed its reservoir management be some considerable design consider- strategy at its Machar ? eld – a subsea ations,” says Primeau. “These vessels tieback to the Eastern Trough Area are going to have to be robust. There’s Project (ETAP) 120 km east of Aber- nobody out there to ? x them.” deen – and wanted to see if there was

Then there’s communication – i.e. any change to the seabed as a result. bandwidth and latency. “How much The sensors, Sonardyne Fetch instru- information do you want to transmit, ments, log and store depth measure- what are you trying to transmit, what ments over long periods. Ordinar- bandwidth do you need, what’s the ily, to gather the data the instruments delay. If you’re operating an ROV and have logged and stored, a vessel with you have 1 second delay does that in- a transceiver would need to be mobi- duce risk?” says Primeau. There’s also lized to the site, where it would then a need for a level of localized auton- acoustically receive the data.