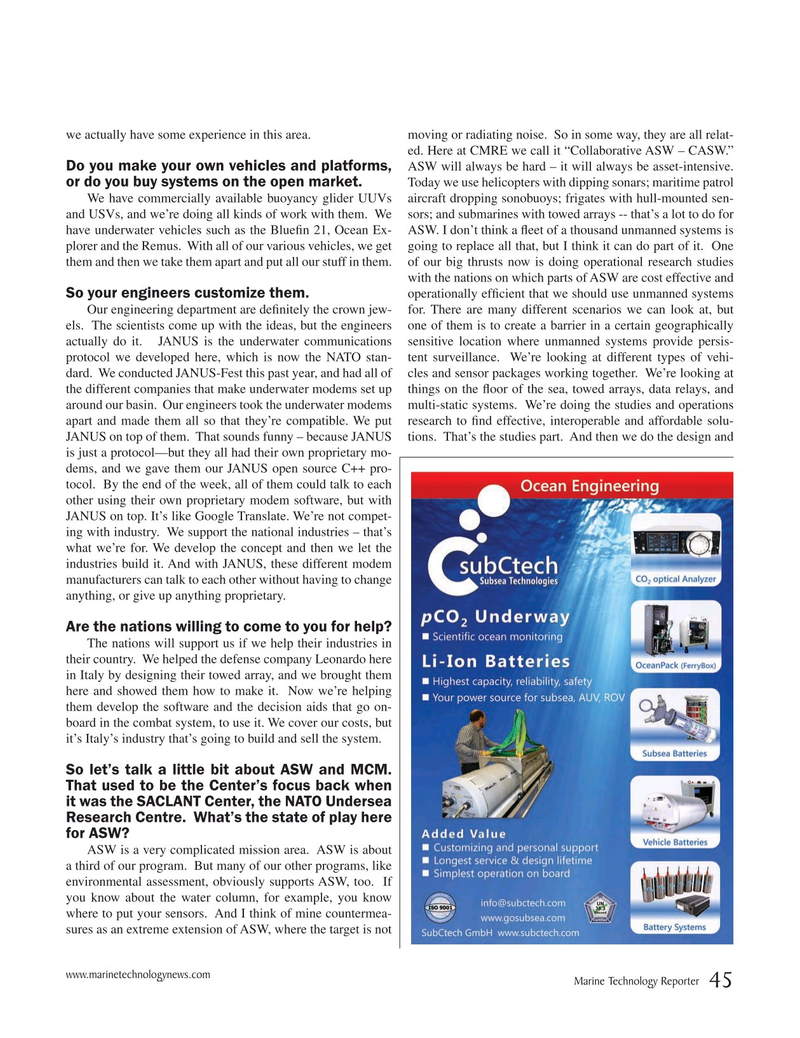 we actually have some experience in this area. moving or radiating noise. So in some way, they are all relat- ed. Here at CMRE we call it “Collaborative ASW – CASW.”

Do you make your own vehicles and platforms, ASW will always be hard – it will always be asset-intensive. or do you buy systems on the open market. Today we use helicopters with dipping sonars; maritime patrol We have commercially available buoyancy glider UUVs aircraft dropping sonobuoys; frigates with hull-mounted sen- and USVs, and we’re doing all kinds of work with them. We sors; and submarines with towed arrays -- that’s a lot to do for have underwater vehicles such as the Blue? n 21, Ocean Ex- ASW. I don’t think a ? eet of a thousand unmanned systems is plorer and the Remus. With all of our various vehicles, we get going to replace all that, but I think it can do part of it. One them and then we take them apart and put all our stuff in them. of our big thrusts now is doing operational research studies with the nations on which parts of ASW are cost effective and

So your engineers customize them. operationally ef? cient that we should use unmanned systems Our engineering department are de? nitely the crown jew- for. There are many different scenarios we can look at, but els. The scientists come up with the ideas, but the engineers one of them is to create a barrier in a certain geographically actually do it. JANUS is the underwater communications sensitive location where unmanned systems provide persis- protocol we developed here, which is now the NATO stan- tent surveillance. We’re looking at different types of vehi- dard. We conducted JANUS-Fest this past year, and had all of cles and sensor packages working together. We’re looking at the different companies that make underwater modems set up things on the ? oor of the sea, towed arrays, data relays, and around our basin. Our engineers took the underwater modems multi-static systems. We’re doing the studies and operations apart and made them all so that they’re compatible. We put research to ? nd effective, interoperable and affordable solu-

JANUS on top of them. That sounds funny – because JANUS tions. That’s the studies part. And then we do the design and is just a protocol—but they all had their own proprietary mo- dems, and we gave them our JANUS open source C++ pro- tocol. By the end of the week, all of them could talk to each other using their own proprietary modem software, but with

JANUS on top. It’s like Google Translate. We’re not compet- ing with industry. We support the national industries – that’s what we’re for. We develop the concept and then we let the industries build it. And with JANUS, these different modem manufacturers can talk to each other without having to change anything, or give up anything proprietary.

Are the nations willing to come to you for help?

The nations will support us if we help their industries in their country. We helped the defense company Leonardo here in Italy by designing their towed array, and we brought them here and showed them how to make it. Now we’re helping them develop the software and the decision aids that go on- board in the combat system, to use it. We cover our costs, but it’s Italy’s industry that’s going to build and sell the system.

So let’s talk a little bit about ASW and MCM.

That used to be the Center’s focus back when it was the SACLANT Center, the NATO Undersea

Research Centre. What’s the state of play here for ASW?

ASW is a very complicated mission area. ASW is about a third of our program. But many of our other programs, like environmental assessment, obviously supports ASW, too. If you know about the water column, for example, you know where to put your sensors. And I think of mine countermea- sures as an extreme extension of ASW, where the target is not www.marinetechnologynews.com