It may surprise you to learn that, on the lower Mississippi River, cruise traffic now accounts for over one fifth of all revenue at the Port of New Orleans, a major cargo hub. With recently modernized terminals, able to handle big ships, the Crescent City last year accommodated over a million cruise passengers, setting its fourth straight record. How they did it is perhaps more impressive than what they have created, for the city, the region and the thousands of professionals they have put to work in the process.

“Two decades ago, the city’s cruise business was a blip on the radar screen,” Port of New Orleans president and CEO Gary LaGrange said last month. And yet, Cruise Lines International Association (CLIA), the official trade organization of the cruise industry of North America, recently ranked the Port of New Orleans the sixth-largest cruise port in the United States with direct industry expenditures in Louisiana totaling $406 million, supporting 8,129 jobs and accounting for $323 million in total income. The journey, not lacking in vision and a great deal of sweat equity on the part of many, wasn’t nearly as complicated as one might think.

Infrastructure is Everything
Since Hurricane Katrina struck in 2005, the port has invested $64 million on the Erato and Julia Street Cruise Terminals next to the Warehouse District. Erato Street opened in 2006 at a cost of $40 million. LaGrange explains, “Julia Street was completely renovated for $20.1 million, and it combines two smaller terminals into one for large cruise ships.”

Erato Street is the bigger of the two facilities. The Erato Complex was the industry’s first intermodal cruise terminal to have a parking garage in the same building, Don Allee, the port’s new cruise and tourism director, said last month. It’s the homeport for two ships operated by Florida-based Carnival Cruise Line. The 1,004-foot and 128,251-ton Carnival Dream sails seven-day journeys from Erato Street, while the 855-foot, 70,367-ton Carnival Elation makes four- and five-day trips.

As impressive as the progress is to date, the port is not yet done. In the first quarter of this year, the port will begin construction on its Poland Avenue cruise terminal near the former U.S. Naval Support Activity site, which closed in 2011. That complex in the city’s Bywater section has been called the Port of Embarkation since WWII. Under an agreement, the U.S. Maritime Administration transferred two berths at the Poland Avenue Wharf to the port to build the cruise terminal. Downriver from the central business district, and for cruise passengers staying in French Quarter hotels, the terminal is just three miles away by car.

The Erato cruise facility should be finished this fall. “Our planned use for it at first will be for port-call ships that need berths for one- to-three-day stays in New Orleans as part of their itineraries,” LaGrange said. The port’s Julia Street and Erato Street cruise terminals have four, home-ported ships that take up berths on Saturdays and Sundays.  LaGrange adds, “The new Poland Avenue berth will allow us to attract more port call ships, bringing more tourists to the city for stays.” And port officials have spoken with Florida-based Disney Cruise Line and other companies in an effort to bring even more traffic. Working every angle, the port financed the Poland Avenue project’s expected $30 million price tag with $21.5 million from the state’s Port Priority Construction Program and the state’s Capital Outlay funds, LaGrange said. The rest is from the port’s annual capital construction budget.

Rising Passenger Count Doubles Employment
In 2014, Port of New Orleans terminals handled more than one million cruise passengers, based on embarkations and disembarkations. Last year’s count was up more than 2.6 percent from 2013, and it was nearly three times as many as in 2001, when the port began marketing itself assiduously as a cruise destination. In the latest data from Washington, DC-based CLIA, the city’s 987,860 embarkations and disembarkations from cruises in 2013 spawned $399 million in spending in Louisiana and supported thousands of jobs.

Over 80 percent of passengers are from out of state, and on average they stay two nights in New Orleans hotels before or after sailing, the port said. Passengers and shipboard crew spend about $78 million annually in the Crescent City, including $27.5 million on lodging and $8.3 million on food and beverages.

“Cruise industry jobs here have roughly doubled in the last decade and continue to grow with consumer demand for larger cruise ships and more frequent cruises,” Matt Gresham, spokesman for the Port of New Orleans said last month. “Most cruise-related port jobs are private-terminal operator jobs, along with sea caps and security, customs and fuel operators. The spinoff jobs, of course, include retail, hospitality, tour operators and food service.” According to CLIA, the cruise industry provided 8,129 jobs, paying nearly $323 million in wages, across Louisiana’s economic sectors in 2013.

Nipping on the heels of better known cruise destinations such as Miami and Port Everglades, the port of New Orleans can point to the doubling of passenger embarkations between 2009 and 2013 as a sign that the destination works and that satisfied customers are spreading the word.

Homeport: New Orleans
Carnival Cruise Line, Norwegian Cruise Line and Royal Caribbean International all rely on New Orleans as a homeport for some of their ships. In July, the port signed a new five-year agreement with Carnival, keeping the world’s biggest cruise line sailing at least two vessels from the city year-round through 2019. Carnival now has homeported two vessels now at the Erato Street Terminal, including the 3,646-passenger Carnival Dream, which can hold up to 4,400 people with multiple occupancies. Last April, it began seven-day trips from the Crescent City to the eastern and western Caribbean. The 2,052-passenger Carnival Elation makes four and five day trips to Mexico from Erato Street.

Carnival last year carried about 330,000 passengers through New Orleans, based on single-count embarkations. And it took 660,000 passengers, based on double-count embarkations and debarkations. Not to be outdone, in late November, Miami-based Norwegian Cruise Line signed a four-year berthing agreement to keep at least one ship sailing from New Orleans seasonally through 2018, with an option to extend the accord to 2021. Late last year, the company began sailing its 2,340-passenger Norwegian Dawn from the Julia Street terminal on seven-day trips to Mexico, Belize and Honduras through this April.

Miami-based Royal Caribbean International began homeporting its 2,476-passenger, 965-foot Serenade of the Seas at Julia Street for trips to the eastern Caribbean as far back as 2013. Before that, the operator’s Navigator of the Seas was docked there.

River and inland cruise lines don’t carry as many passengers as blue water ships but they’re important to the port’s activity, LaGrange said. “These passengers come to New Orleans and stay a few nights before or after their cruise,” he said. “Inland cruises stop at other attractions and sites in Louisiana, including plantation homes, small river communities and historical attractions. They contribute considerably to the economies of those areas.” River and inland cruises accounted for about 10,000 passenger embarkations in New Orleans last year. That number is also expected to grow.

Port’s Cruise Capacity Maximized, Logistics Streamlined
Asked whether the port has ever turned away cruise business because of berthing space, LaGrange said no. “We have marketed to our capacity, and we intend to expand capacity in the future,” he said. As for berthing fees, he said agreements with individual lines differ, but are very competitive within the industry. But, what the cruise lines get for their money is apparently worth it.

For example, getting on ships with luggage often looks arduous, and it can be tough in real life. Logistics have been streamlined in New Orleans, however. According to Don Allee, the Erato Street Cruise Terminal is considered the nation’s most convenient and efficient. Beyond this, the 90,000 square-foot site has a 1,000-vehicle garage built into its structure. “At Erato Street, SeaCaps take luggage from passengers’ vehicles to the ship, and an elevator transports guests directly to the terminal for check-in,” LaGrange said. “At Julia Street, ground-level parking is adjacent to the terminal, and guests check their luggage while on the way to park their vehicles.”

Heightened Pace calls for New Faces
Underscoring the importance of the port and the new surge in cruise business, New Orleans continues to attract top talent to the waterfront. And, because of retirements, the port has some new faces. Don Allee began there in November after serving as CEO of the Mississippi State Port Authority from 2002 to 2012 and then as a port expert at PLG Consulting. He’s also a former director of the Port of Beaumont in Texas. Allee replaced Robert Jumonville, who retired in January after 25 years at the Port of New Orleans. Jumonville oversaw the cruise-terminal expansions, and based on his accomplishments, won a 2015 American Association of Port Authorities Cruise Award in early February in Fort Lauderdale. Under Jumonville’s watch, the Port saw a 1,200-percent rise in passenger throughput and revenues produced by the Cruise and Tourism Division increased more than 500 percent.

Separately, former Port of San Diego vice president Brandy Christian was named chief operating officer at the Port of New Orleans in January, replacing Patrick Gallwey, who retired after 34 years. During her tenure with California’s fourth largest cargo port, Christian was said to be the driving force behind securing major accounts for the cruise and cargo business lines at the Port. She was also instrumental in significantly improving operational processes and reducing costs for the public agency. As New Orleans looks to build on its recent cruise success, Christian will likely be an important part of that process.

Today, cruise traffic generates about 21 percent of the port’s annual revenue, with cargo (70 percent) and industrial real estate (9 percent) accounting for the balance of income. That balance could shift in the near future. As far back as 2002, LaGrange created the Division of Cruise and Tourism to include the port’s tourism tenants--Hilton Riverside Towers, Audubon Aquarium of the Americas, Woldenburg Park, Blaine Kern’s Mardi Gras World, The Outlet Collection at Riverwalk, and the Creole Queen and Natchez excursion boats. That move and the new infrastructure, are combining to pay dividends.

Looking ahead, the recent news that President Barak Obama wants to ease trade and travel restrictions with Cuba is music to the ears of Allee. “Someday cruise ships will sail between the United States and Cuba, but it’s too soon for that now,” Allee said. For now, U.S. food and humanitarian aid can be shipped to Cuba, and Americans who are close relatives of Cubans, or academics, or on cultural and educational “people-to-people programs” can visit. At one time, though, New Orleans was a major gateway to Cuba for freight. The port is watching those developments closely.

Gary LaGrange explains the port’s formula simply. “We sell New Orleans as two vacations in one. Come for our music, cuisine and history, and then embark on your cruise.”  So far, that marketing strategy has worked exactly to plan.  But, you get the feeling that he is far from done on this ongoing effort, when he adds, “We’re constantly marketing the city as a world-class cruise port, and we hope to make some announcements this year about new lines and expanded offerings.” None of that is possible with leadership, infrastructure and a good product to sell.

Cruise Critic, a cruise review and information web site, recently named the Port of New Orleans its “Best North American Homeport.” Accolades like that could someday see it as the nation’s busiest. Until then, Gary LaGrange and his management team can be happy that it has become one of America’s best.

(As published in the 1Q 2015 edition of Maritime Professional - www.maritimeprofessional.com) 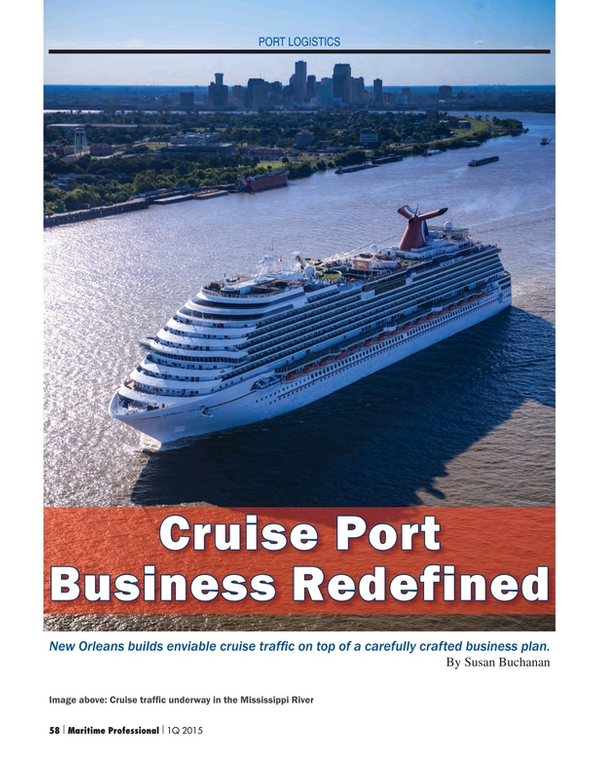