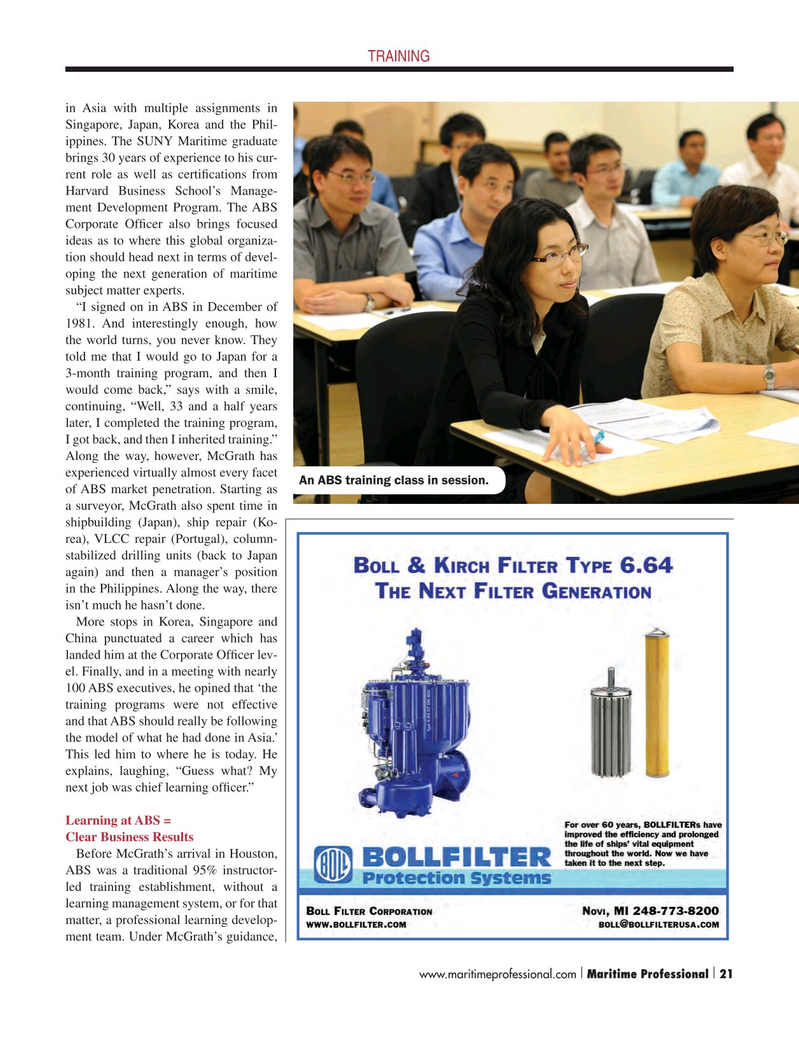 TRAINING in Asia with multiple assignments in

Singapore, Japan, Korea and the Phil- ippines. The SUNY Maritime graduate brings 30 years of experience to his cur- rent role as well as certi? cations from

Corporate Of? cer also brings focused ideas as to where this global organiza- tion should head next in terms of devel- oping the next generation of maritime subject matter experts.

“I signed on in ABS in December of 1981. And interestingly enough, how the world turns, you never know. They told me that I would go to Japan for a 3-month training program, and then I would come back,” says with a smile, continuing, “Well, 33 and a half years later, I completed the training program,

I got back, and then I inherited training.”

Along the way, however, McGrath has experienced virtually almost every facet

An ABS training class in session.

of ABS market penetration. Starting as a surveyor, McGrath also spent time in shipbuilding (Japan), ship repair (Ko- rea), VLCC repair (Portugal), column- stabilized drilling units (back to Japan again) and then a manager’s position in the Philippines. Along the way, there isn’t much he hasn’t done.

More stops in Korea, Singapore and

China punctuated a career which has landed him at the Corporate Of? cer lev- el. Finally, and in a meeting with nearly 100 ABS executives, he opined that ‘the training programs were not effective and that ABS should really be following the model of what he had done in Asia.’

This led him to where he is today. He explains, laughing, “Guess what? My next job was chief learning of? cer.”

Before McGrath’s arrival in Houston,

ABS was a traditional 95% instructor- led training establishment, without a learning management system, or for that matter, a professional learning develop- ment team. Under McGrath’s guidance, www.maritimeprofessional.com Maritime Professional 21| |