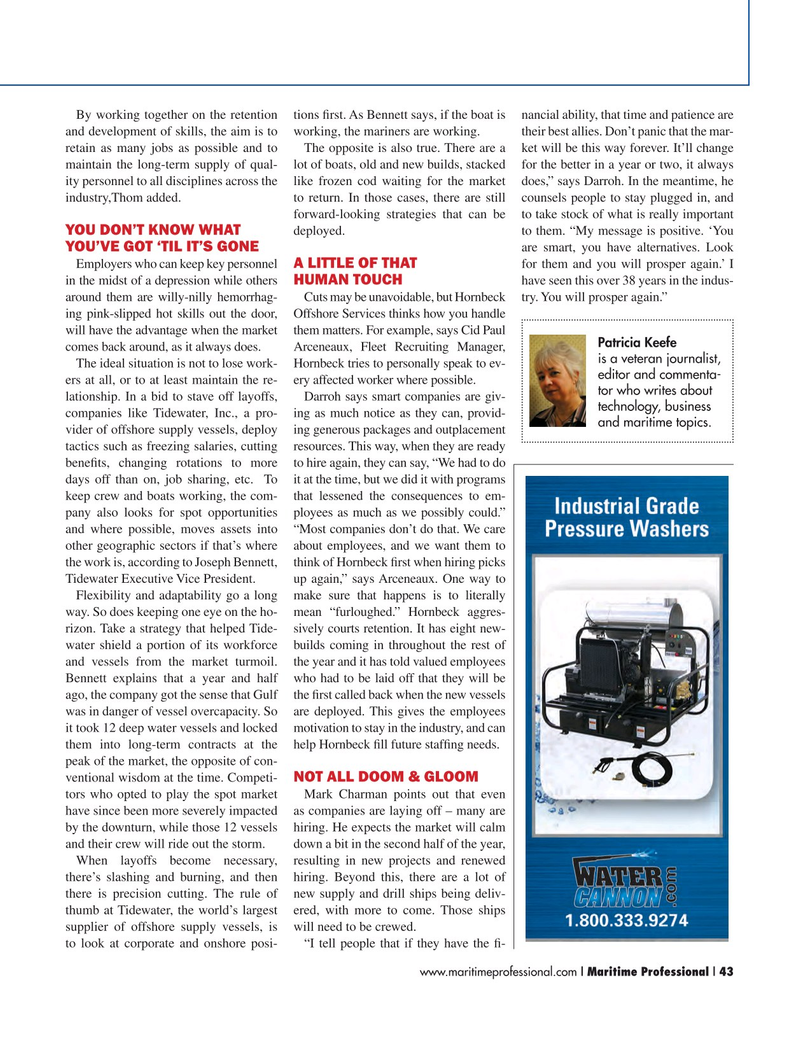 By working together on the retention tions ? rst. As Bennett says, if the boat is nancial ability, that time and patience are and development of skills, the aim is to working, the mariners are working. their best allies. Don’t panic that the mar- retain as many jobs as possible and to The opposite is also true. There are a ket will be this way forever. It’ll change maintain the long-term supply of qual- lot of boats, old and new builds, stacked for the better in a year or two, it always ity personnel to all disciplines across the like frozen cod waiting for the market does,” says Darroh. In the meantime, he industry,Thom added. to return. In those cases, there are still counsels people to stay plugged in, and forward-looking strategies that can be to take stock of what is really important

YOU DON’T KNOW WHAT deployed. to them. “My message is positive. ‘You are smart, you have alternatives. Look

YOU’VE GOT ‘TIL IT’S GONE

Employers who can keep key personnel for them and you will prosper again.’ I

HUMAN TOUCH around them are willy-nilly hemorrhag- Cuts may be unavoidable, but Hornbeck try. You will prosper again.” ing pink-slipped hot skills out the door, Offshore Services thinks how you handle will have the advantage when the market them matters. For example, says Cid Paul

Patricia Keefe comes back around, as it always does. Arceneaux, Fleet Recruiting Manager, is a veteran journalist,

The ideal situation is not to lose work- Hornbeck tries to personally speak to ev- editor and commenta- ers at all, or to at least maintain the re- ery affected worker where possible. tor who writes about lationship. In a bid to stave off layoffs, Darroh says smart companies are giv- technology, business companies like Tidewater, Inc., a pro- ing as much notice as they can, provid- and maritime topics. vider of offshore supply vessels, deploy ing generous packages and outplacement tactics such as freezing salaries, cutting resources. This way, when they are ready bene? ts, changing rotations to more to hire again, they can say, “We had to do days off than on, job sharing, etc. To it at the time, but we did it with programs keep crew and boats working, the com- that lessened the consequences to em- pany also looks for spot opportunities ployees as much as we possibly could.” and where possible, moves assets into “Most companies don’t do that. We care other geographic sectors if that’s where about employees, and we want them to the work is, according to Joseph Bennett, think of Hornbeck ? rst when hiring picks

Flexibility and adaptability go a long make sure that happens is to literally way. So does keeping one eye on the ho- mean “furloughed.” Hornbeck aggres- rizon. Take a strategy that helped Tide- sively courts retention. It has eight new- water shield a portion of its workforce builds coming in throughout the rest of and vessels from the market turmoil. the year and it has told valued employees

Bennett explains that a year and half who had to be laid off that they will be ago, the company got the sense that Gulf the ? rst called back when the new vessels was in danger of vessel overcapacity. So are deployed. This gives the employees it took 12 deep water vessels and locked motivation to stay in the industry, and can them into long-term contracts at the help Hornbeck ? ll future staf? ng needs.

peak of the market, the opposite of con- ventional wisdom at the time. Competi- NOT ALL DOOM & GLOOM tors who opted to play the spot market Mark Charman points out that even have since been more severely impacted as companies are laying off – many are by the downturn, while those 12 vessels hiring. He expects the market will calm and their crew will ride out the storm. down a bit in the second half of the year,

When layoffs become necessary, resulting in new projects and renewed there’s slashing and burning, and then hiring. Beyond this, there are a lot of there is precision cutting. The rule of new supply and drill ships being deliv- thumb at Tidewater, the world’s largest ered, with more to come. Those ships supplier of offshore supply vessels, is will need to be crewed. to look at corporate and onshore posi- “I tell people that if they have the ? - www.maritimeprofessional.com | Maritime Professional | 43