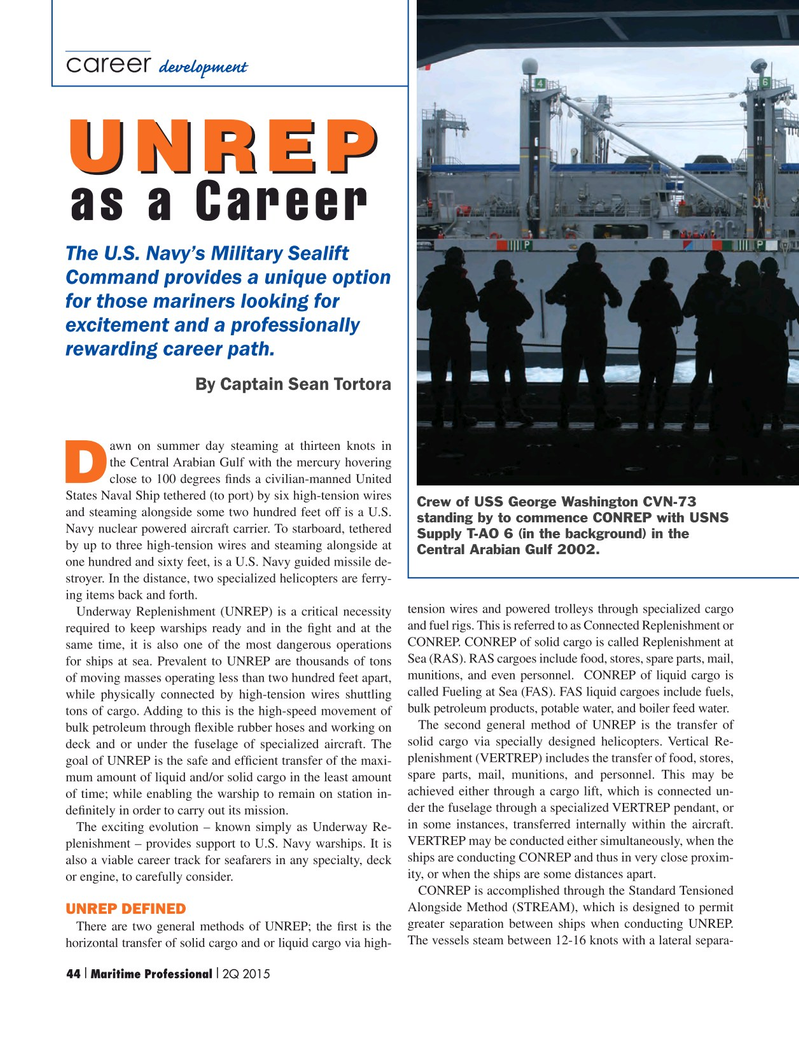 Command provides a unique option for those mariners looking for excitement and a professionally rewarding career path.

Crew of USS George Washington CVN-73 and steaming alongside some two hundred feet off is a U.S. standing by to commence CONREP with USNS

one hundred and sixty feet, is a U.S. Navy guided missile de- stroyer. In the distance, two specialized helicopters are ferry- ing items back and forth.

Underway Replenishment (UNREP) is a critical necessity tension wires and powered trolleys through specialized cargo required to keep warships ready and in the ? ght and at the and fuel rigs. This is referred to as Connected Replenishment or same time, it is also one of the most dangerous operations CONREP. CONREP of solid cargo is called Replenishment at for ships at sea. Prevalent to UNREP are thousands of tons Sea (RAS). RAS cargoes include food, stores, spare parts, mail, of moving masses operating less than two hundred feet apart, munitions, and even personnel. CONREP of liquid cargo is while physically connected by high-tension wires shuttling called Fueling at Sea (FAS). FAS liquid cargoes include fuels, tons of cargo. Adding to this is the high-speed movement of bulk petroleum products, potable water, and boiler feed water.

The second general method of UNREP is the transfer of bulk petroleum through ? exible rubber hoses and working on deck and or under the fuselage of specialized aircraft. The solid cargo via specially designed helicopters. Vertical Re- plenishment (VERTREP) includes the transfer of food, stores, goal of UNREP is the safe and ef? cient transfer of the maxi- mum amount of liquid and/or solid cargo in the least amount spare parts, mail, munitions, and personnel. This may be achieved either through a cargo lift, which is connected un- of time; while enabling the warship to remain on station in- der the fuselage through a specialized VERTREP pendant, or de? nitely in order to carry out its mission.

in some instances, transferred internally within the aircraft.

The exciting evolution – known simply as Underway Re- plenishment – provides support to U.S. Navy warships. It is VERTREP may be conducted either simultaneously, when the also a viable career track for seafarers in any specialty, deck ships are conducting CONREP and thus in very close proxim- ity, or when the ships are some distances apart. or engine, to carefully consider.

CONREP is accomplished through the Standard Tensioned

Alongside Method (STREAM), which is designed to permit

There are two general methods of UNREP; the ? rst is the greater separation between ships when conducting UNREP.