Industry frets about the coming deadline. Shipping desperately wants to be ready, but will global shore-based infrastructure and refining capacity match the demand that is sure to come? And … are regulators listening to industry’s concerns?

In early June, the U.S. Coast Guard (USCG) and U.S. Environmental Protection Agency (EPA) held a public workshop in Washington to help the agencies prepare for the January 1, 2020 deadline for worldwide implementation of very low sulfur marine fuel that meets the new 0.50% sulfur cap as set forth by the International Maritime Organization (IMO).

More specifically, the workshop was part of a larger process to prepare for a July “intersessional working group meeting” of the IMO’s Marine Environment Protection Committee (MEPC). That intersessional work will advance to the MEPC’s 73rd session in October. Wayne Lundy, Senior USCG Marine Engineer, moderated the June workshop, along with the EPA’s Chris Laroo. Lundy said that agency staff, in preparation for the MEPC meeting, want solutions that are mindful and watchful of US maritime shippers’ concerns and priorities.

In advance of the meeting, the USCG and EPA listed seven broad discussion topics:

A total of 36 people attended with a few more dialing in via telephone. Fifteen were from various government agencies, including, EPA, Coast Guard and MARAD. Non-governmental attendees included representatives from maritime and shipping groups, such as Intertanko, the World Shipping Council and from petroleum-based trade groups and individual attorneys and consultants attending on behalf of clients.

Despite the advance outline of issues, the workshop discussion never gelled around that framework.  In the end, it proved difficult to nail down a concise set of recommendations or list of priorities. The initial discussion was dominated by a concern raised by Washington attorney Barry Hartman, with K&L Gates. For his part, Hartman said that the most pressing topic for his clients is whether low sulfur fuel will even be available, at global distribution, by January 2020.

Hartman’s concerns were seconded by other stakeholders, including Bryan Wood-Thomas, VP, World Shipping Council who insists, “… from our perspective it’s inevitable that there won't be fuel.” Yes, that could be temporary, he added, but it presents a set of conditions that need attention, now.

In a discussion after the meeting Hartman maintained that noncompliance means that “ships could be detained, people could face massive penalties and criminal prosecution. It is incumbent on the government to provide guidance and instruction to the industry; hopefully the US will be a leader at the July meetings.”

Regarding supply, there is some related precedence. An ultra-low sulfur fuel (0.1%) is already in use but, importantly, that use is limited to certain “Emission Control Areas” (ECAs), which include North America and the US Caribbean Sea. Beyond these designated areas the sulfur limit is much higher, 35,000ppm (3.5%).

Now comes the big reduction: from 35,000ppm to 5,000ppm – the new 0.5% fuel. This presents a much different supply picture. Recall that ultra-low fuel is required just within ECAs (within five miles of a country’s coastline) and just for a portion of a ship’s journey. Because of this more limited demand, supplies of ultra-low fuel are generally now considered adequate. Starting in January 2020 demand for the new 0.5% fuel will be worldwide, and well beyond the limited territory and operations of ECAs. The question remains: Will there be enough?

IMO also writes that new blends, at first, are likely to cost more than the “heavy fuel oil” bunkers (fuel) used by the majority of ships today. Echoing that vague projection, another workshop attendee commented that low-sulfur fuels will shift demand for high quality petroleum stocks, skewing overall supplies to such an extent that fuel prices across the board will start to rise.

In its Voyager newsletter in January ExxonMobil writes that it will supply 0.5% fuels in ports “in Northwest Europe, the Mediterranean and Singapore. Additional locations will be announced ahead of the January 1, 2020 deadline.” ExxonMobil writes that its “fuels will include residual and distillate grades” and that the company is “at a very advanced stage in the development of these fuels, therefore making us well positioned ahead of the IMO’s 2020 implementation date.”

The foregoing ExxonMobil optimism sounds like a smooth pathway, but the bigger picture is far more complex, presenting many challenges, not just with production, but across the board, including handling, storage and shipboard logistics.

Luca Volta is Marine Fuels Venture Manager with ExxonMobil. Volta was asked to expand on the 0.5% supply issue. He compared the upcoming fuel switch, with just a bit of exaggeration, to the move from coal to liquids. One major set of issues will come from fuel blending, or, perhaps more likely, requirements for fuel segregation. Volta described the 0.5% fuels as products that will require increased focus on storage, handling and maintenance in order to retain maximum emissions and combustion characteristics.

Volta noted that there are over 600 refineries in the world. The 0.5% fuel from each will have singular characteristics, he said. It’s possible that residues will be incompatible, requiring at least some testing if fuels are likely to be mixed. More significantly, mixing could require tank and line cleaning and segregating fuels from different suppliers. Volta said that ExxonMobil will have supplies for customers, although volumes will vary around the world. He said his company will work with shippers who might be interested in lining up supplies in advance and held ready in various ports.

Addressing the three critical issues of segregation, quality and availability, it is possible that the screws tighten further if the IMO, at the October MEPC meeting, decides to approve amendments that would “prohibit the carriage of non-compliant fuel oil on board a ship.”  Naturally, the prospect of a “carriage ban” was a top concern among workshop participants, at least from the private sector.

It was the view of both the EPA and USCG that compliant fuel would indeed be available on schedule, hence the workshop’s focus on implementation, not fuel supply and possible, related subsequent problems. The workshop discussion did move to other areas but, again, progress on specific ideas and consensus got bogged down. Discussion covered many topics, from operational safety linked to fuel blending to varying degrees of enforcement among global port officials.

As discussion moved away from fuel availability, Coast Guard and EPA officials reemphasized the Workshop’s original goal – to understand industry’s positions and concerns in advance of the July intersessional.

At that same meeting, industry stakeholders, led by WSC’s Wood-Thomas and Intertanko’s Joseph Angelo, asked federal regulators Lundy and Laroo a counter question: what’s the government’s position on implementation? We don’t have one, was the answer. “We did not submit a paper” for the July intersessional meeting, Lundy said, “But maybe we could re-do something. And we could follow up with a draft position.”

Wood-Thomas and Angelo then pressed US officials to get up to speed on industry’s concerns. They pointed out that WSC and Intertanko have worked with other industry trade groups to develop a set of top issues and suggested solutions regarding implementation and to present that work to the MEPC.

For example, Angelo referenced an industry paper presenting a “draft standard for reporting on fuel oil non-availability.” Another paper addressed an approach for ships to “develop written implementation plans and to adopt a practical and pragmatic approach when verifying compliance” with new fuel requirements. Importantly, these weren’t just industry ideas, Angelo said. Panama, for example, signed on to the first paper, while Panama and Norway were co-signers for the compliance paper.

In fact, Intertanko and industry partners have submitted five papers dealing with implementation. Angelo asked whether the USCG and/or EPA had read those position papers. They had not. Angelo left paper copies with the workshop leaders and asked the Coast Guard and EPA staff to review and support this compendium of work.

Another top Workshop concern was assuring a level playing field. The IMO, after all, can make rules, but enforcement is up to individual states (countries) and ports. Companies that cheat and continue to use non-compliant fuel will benefit economically compared to companies following the rules – obviously an untenable situation and a fatal flaw in a program established for environmental benefits.  This concern led to lengthy discussions on possible solutions, from the use of bunker delivery notes to port officials developing fuel verification options. Another suggestion was to employ new hand-held devices that can detect a fuel’s chemical profile.

Everyone agreed these were top concerns.  However, as with the discussions on other issues, there was no resolution among Workshop participants on best next steps for a level playing field or the use of bunker delivery notes or the range of other topics that could make implementation very difficult.

Summing Up, Looking Ahead

At the close of the Workshop Lundy and Laroo said that participants’ comments and information will be used to develop a foundational document for the July intersessional.  New documents will be posted to the public docket website: go to www.regulations.gov and type USCG-2018-0488 in the search window. Lundy plans another workshop later in the summer to report on the July intersessional, providing another chance to prepare for the critical MEPC meeting in October. Based on what happened in June, that additional workshop is arguably critical to what happens next – especially when it comes to what happens on this side of the pond. What is crystal clear is that there is much work to be done in the interim. Stay tuned.

This article first appeared in the May/June edition of Maritime Logistics Professional magazine. 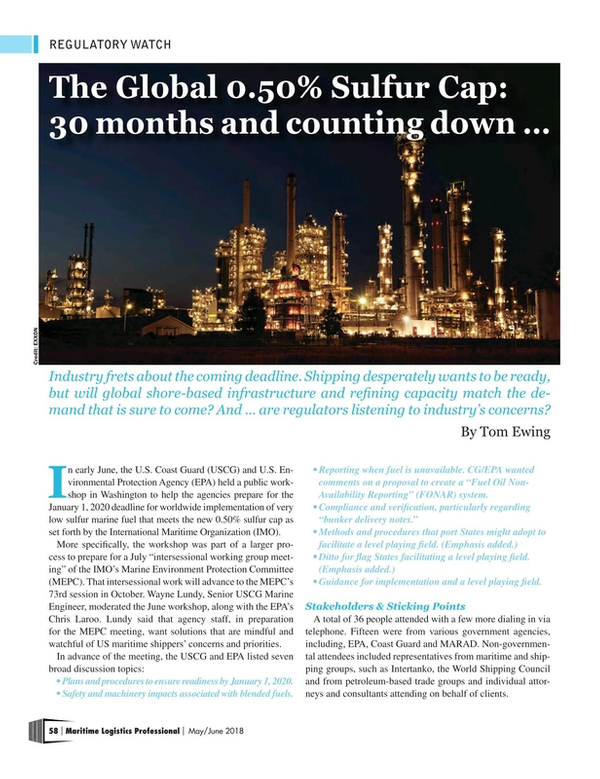 Read The Global 0.50% Sulfur Cap: 30 months and counting down … in Pdf, Flash or Html5 edition of May/Jun 2018 Maritime Logistics Professional

Other stories from May/Jun 2018 issue