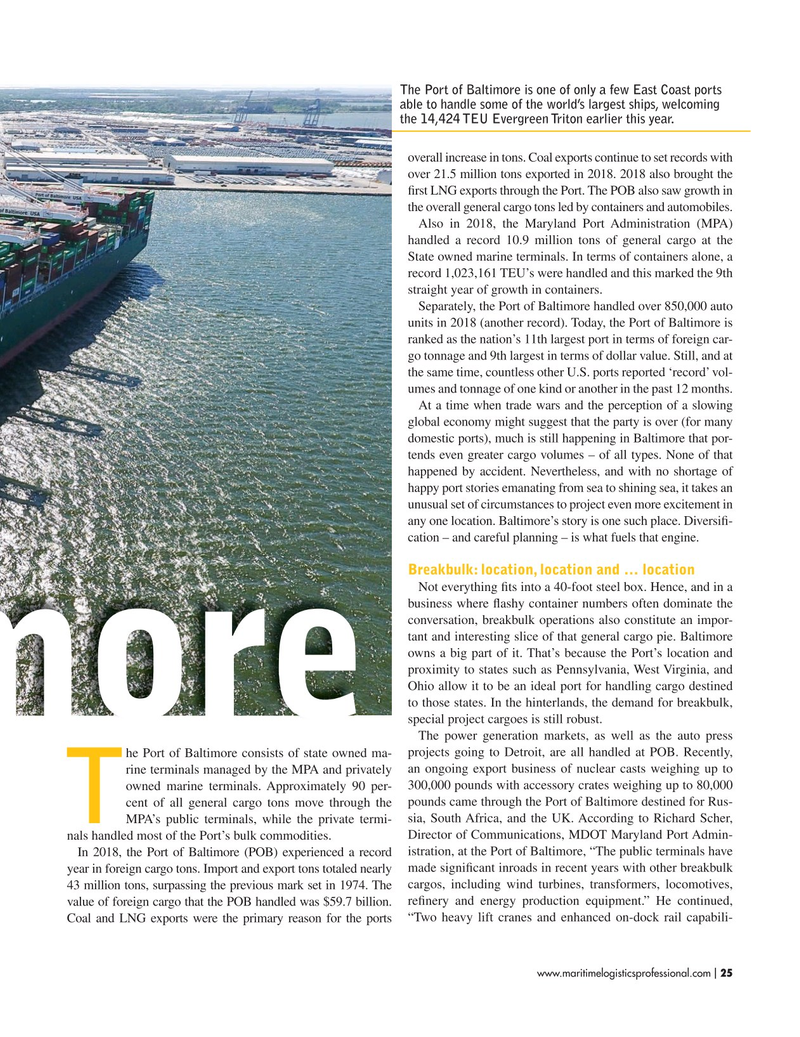 The Port of Baltimore is one of only a few East Coast ports able to handle some of the world’s largest ships, welcoming the 14,424 TEU Evergreen Triton earlier this year.

overall increase in tons. Coal exports continue to set records with over 21.5 million tons exported in 2018. 2018 also brought the ? rst LNG exports through the Port. The POB also saw growth in the overall general cargo tons led by containers and automobiles.

Also in 2018, the Maryland Port Administration (MPA) handled a record 10.9 million tons of general cargo at the

State owned marine terminals. In terms of containers alone, a record 1,023,161 TEU’s were handled and this marked the 9th straight year of growth in containers.

Separately, the Port of Baltimore handled over 850,000 auto units in 2018 (another record). Today, the Port of Baltimore is ranked as the nation’s 11th largest port in terms of foreign car- go tonnage and 9th largest in terms of dollar value. Still, and at the same time, countless other U.S. ports reported ‘record’ vol- umes and tonnage of one kind or another in the past 12 months.

At a time when trade wars and the perception of a slowing global economy might suggest that the party is over (for many domestic ports), much is still happening in Baltimore that por- tends even greater cargo volumes – of all types. None of that happened by accident. Nevertheless, and with no shortage of happy port stories emanating from sea to shining sea, it takes an unusual set of circumstances to project even more excitement in any one location. Baltimore’s story is one such place. Diversi? - cation – and careful planning – is what fuels that engine.

Not everything ? ts into a 40-foot steel box. Hence, and in a business where ? ashy container numbers often dominate the conversation, breakbulk operations also constitute an impor- tant and interesting slice of that general cargo pie. Baltimore owns a big part of it. That’s because the Port’s location and proximity to states such as Pennsylvania, West Virginia, and

Ohio allow it to be an ideal port for handling cargo destined to those states. In the hinterlands, the demand for breakbulk, special project cargoes is still robust.

The power generation markets, as well as the auto press he Port of Baltimore consists of state owned ma- projects going to Detroit, are all handled at POB. Recently, rine terminals managed by the MPA and privately an ongoing export business of nuclear casts weighing up to owned marine terminals. Approximately 90 per- 300,000 pounds with accessory crates weighing up to 80,000 cent of all general cargo tons move through the pounds came through the Port of Baltimore destined for Rus-

MPA’s public terminals, while the private termi- sia, South Africa, and the UK. According to Richard Scher, nals handled most of the Port’s bulk commodities. Director of Communications, MDOT Maryland Port Admin-

In 2018, the Port of Baltimore (POB) experienced a record istration, at the Port of Baltimore, “The public terminals have year in foreign cargo tons. Import and export tons totaled nearly made signi? cant inroads in recent years with other breakbulk 43 million tons, surpassing the previous mark set in 1974. The cargos, including wind turbines, transformers, locomotives, value of foreign cargo that the POB handled was $59.7 billion. re? nery and energy production equipment.” He continued,