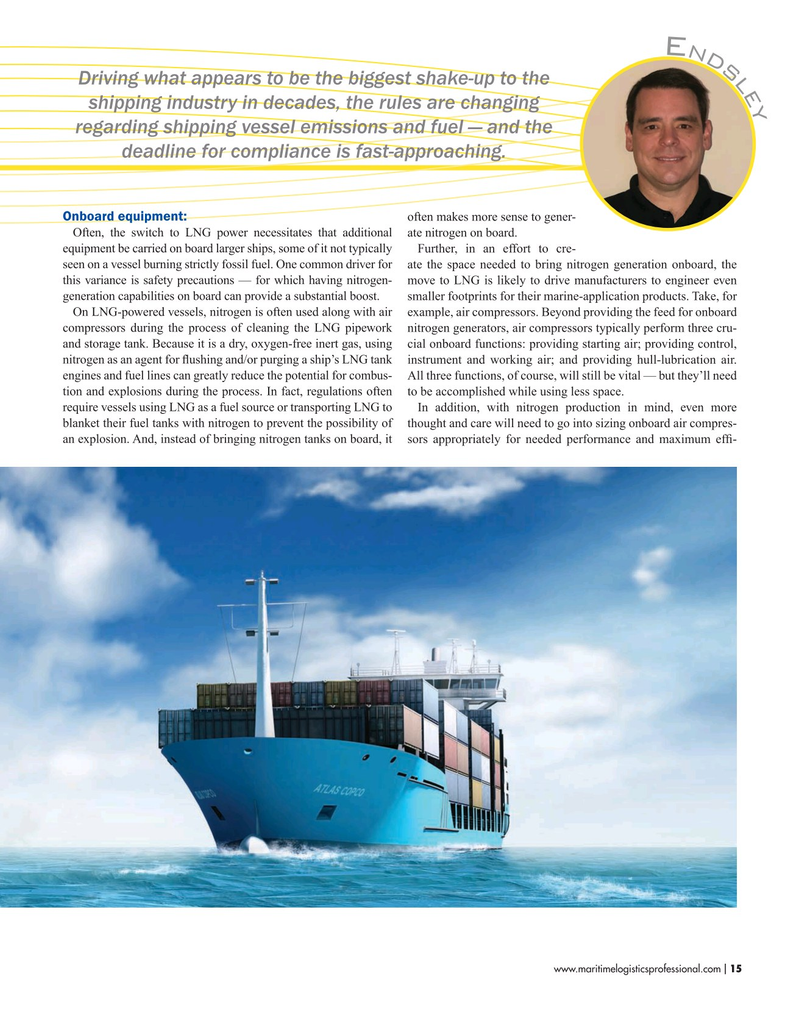 Driving what appears to be the biggest shake-up to the

E y shipping industry in decades, the rules are changing regarding shipping vessel emissions and fuel — and the deadline for compliance is fast-approaching.

Often, the switch to LNG power necessitates that additional ate nitrogen on board.

equipment be carried on board larger ships, some of it not typically Further, in an effort to cre- seen on a vessel burning strictly fossil fuel. One common driver for ate the space needed to bring nitrogen generation onboard, the this variance is safety precautions — for which having nitrogen- move to LNG is likely to drive manufacturers to engineer even generation capabilities on board can provide a substantial boost. smaller footprints for their marine-application products. Take, for

On LNG-powered vessels, nitrogen is often used along with air example, air compressors. Beyond providing the feed for onboard compressors during the process of cleaning the LNG pipework nitrogen generators, air compressors typically perform three cru- and storage tank. Because it is a dry, oxygen-free inert gas, using cial onboard functions: providing starting air; providing control, nitrogen as an agent for fushing and/or purging a ship’s LNG tank instrument and working air; and providing hull-lubrication air. engines and fuel lines can greatly reduce the potential for combus- All three functions, of course, will still be vital — but they’ll need tion and explosions during the process. In fact, regulations often to be accomplished while using less space.

require vessels using LNG as a fuel source or transporting LNG to In addition, with nitrogen production in mind, even more blanket their fuel tanks with nitrogen to prevent the possibility of thought and care will need to go into sizing onboard air compres- an explosion. And, instead of bringing nitrogen tanks on board, it sors appropriately for needed performance and maximum eff- www.maritimelogisticsprofessional.com 15