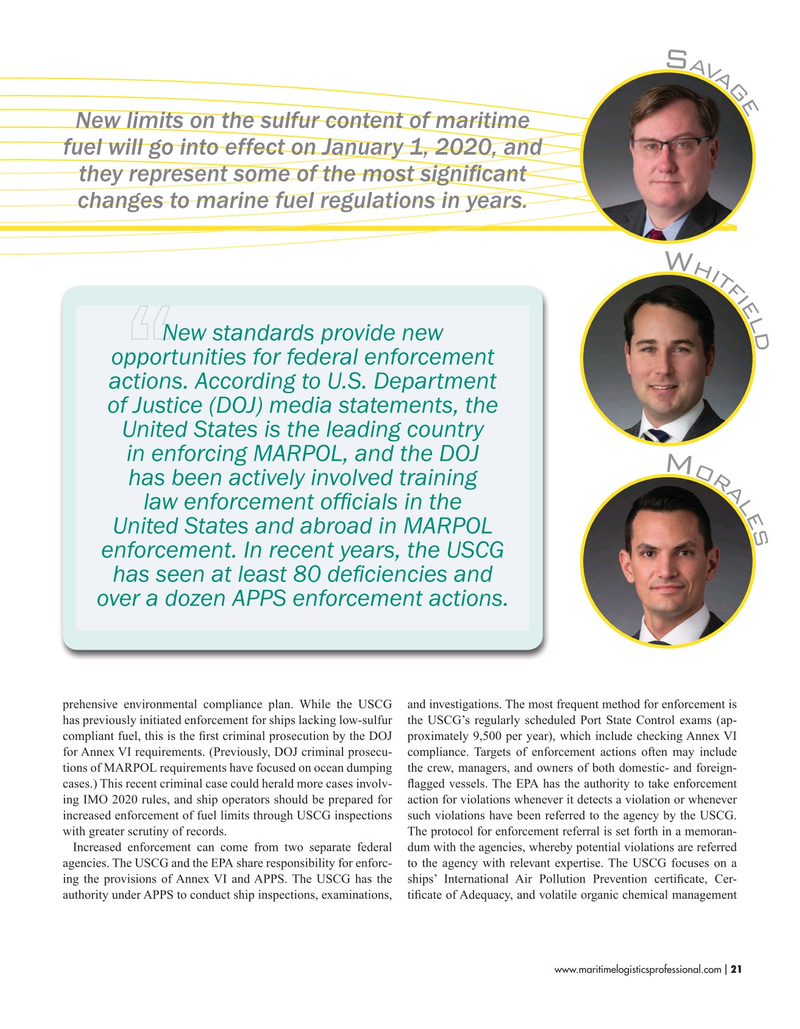 New limits on the sulfur content of maritime fuel will go into effect on January 1, 2020, and they represent some of the most signifcant changes to marine fuel regulations in years.

United States is the leading country in enforcing MARPOL, and the DOJ

United States and abroad in MARPOL enforcement. In recent years, the USCG has seen at least 80 defciencies and over a dozen APPS enforcement actions.

prehensive environmental compliance plan. While the USCG and investigations. The most frequent method for enforcement is has previously initiated enforcement for ships lacking low-sulfur the USCG’s regularly scheduled Port State Control exams (ap- compliant fuel, this is the frst criminal prosecution by the DOJ proximately 9,500 per year), which include checking Annex VI for Annex VI requirements. (Previously, DOJ criminal prosecu- compliance. Targets of enforcement actions often may include tions of MARPOL requirements have focused on ocean dumping the crew, managers, and owners of both domestic- and foreign- cases.) This recent criminal case could herald more cases involv- fagged vessels. The EPA has the authority to take enforcement ing IMO 2020 rules, and ship operators should be prepared for action for violations whenever it detects a violation or whenever increased enforcement of fuel limits through USCG inspections such violations have been referred to the agency by the USCG. with greater scrutiny of records. The protocol for enforcement referral is set forth in a memoran-

Increased enforcement can come from two separate federal dum with the agencies, whereby potential violations are referred agencies. The USCG and the EPA share responsibility for enforc- to the agency with relevant expertise. The USCG focuses on a ing the provisions of Annex VI and APPS. The USCG has the ships’ International Air Pollution Prevention certifcate, Cer- authority under APPS to conduct ship inspections, examinations, tifcate of Adequacy, and volatile organic chemical management www.maritimelogisticsprofessional.com 21