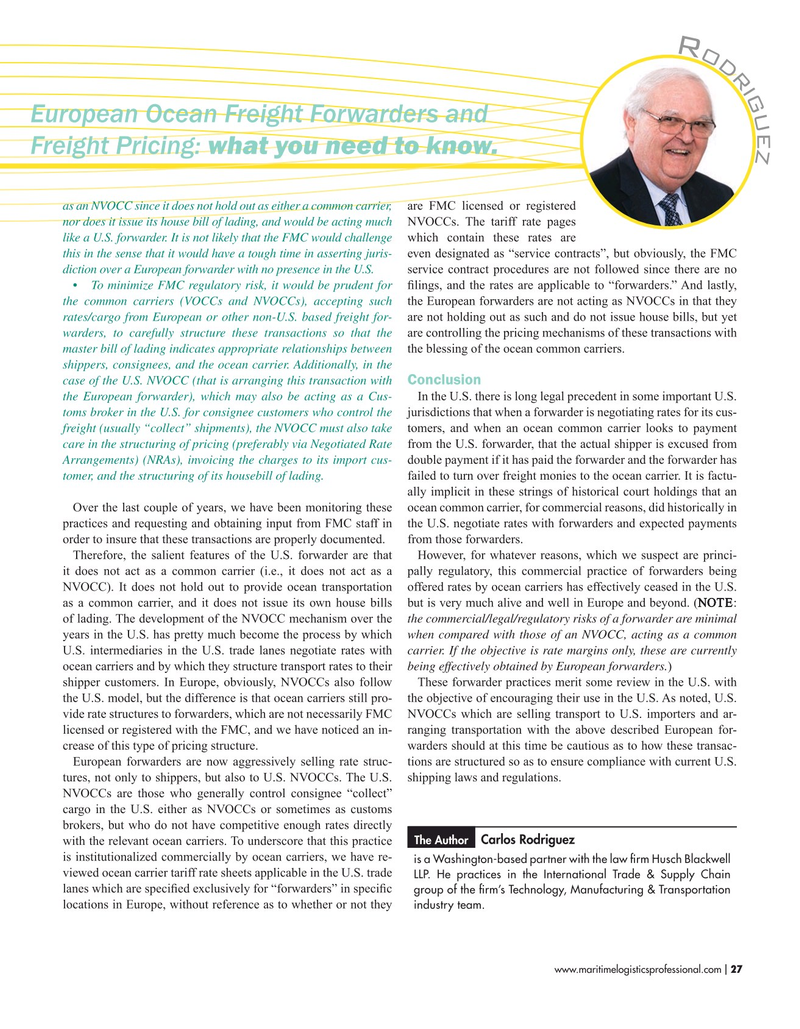 Freight Pricing: what you need to know.

as an NV OCC since it does not hold out as either a common carrier, are FMC licensed or registered nor does it issue its house bill of lading, and would be acting much NVOCCs. The tariff rate pages like a U .S. forwarder. It is not likely that the FMC would challenge which contain these rates are this in the sense that it would have a tough time in asserting juris- even designated as “service contracts”, but obviously, the FMC diction over a European forwarder with no presence in the U.S. service contract procedures are not followed since there are no • To minimize FMC regulatory risk, it would be prudent for flings, and the rates are applicable to “forwarders.” And lastly, the common carriers (VOCCs and NVOCCs), accepting such the European forwarders are not acting as NVOCCs in that they rates/cargo from European or other non-U.S. based freight for- are not holding out as such and do not issue house bills, but yet warders, to carefully structure these transactions so that the are controlling the pricing mechanisms of these transactions with master bill of lading indicates appropriate relationships between the blessing of the ocean common carriers.

shippers, consignees, and the ocean carrier. Additionally, in the

Conclusion case of the U.S. NVOCC (that is arranging this transaction with the Eur opean forwarder), which may also be acting as a Cus- In the U.S. there is long legal precedent in some important U.S. toms br oker in the U.S. for consignee customers who control the jurisdictions that when a forwarder is negotiating rates for its cus- freight (usually “collect” shipments), the NVOCC must also take tomers, and when an ocean common carrier looks to payment care in the structuring of pricing (preferably via Negotiated Rate from the U.S. forwarder, that the actual shipper is excused from

Arrangements) (NRAs), invoicing the charges to its import cus- double payment if it has paid the forwarder and the forwarder has tomer, and the structuring of its housebill of lading. failed to turn over freight monies to the ocean carrier. It is factu- ally implicit in these strings of historical court holdings that an

Over the last couple of years, we have been monitoring these ocean common carrier, for commercial reasons, did historically in practices and requesting and obtaining input from FMC staff in the U.S. negotiate rates with forwarders and expected payments order to insure that these transactions are properly documented. from those forwarders.

NVOCC). It does not hold out to provide ocean transportation offered rates by ocean carriers has effectively ceased in the U.S. as a common carrier, and it does not issue its own house bills but is very much alive and well in Europe and beyond. (NOTE: of lading. The development of the NVOCC mechanism over the the commer cial/legal/regulatory risks of a forwarder are minimal years in the U.S. has pretty much become the process by which when compared with those of an NVOCC, acting as a common

U.S. intermediaries in the U.S. trade lanes negotiate rates with carrier. If the objective is rate margins only, these are currently ocean carriers and by which they structure transport rates to their being effectively obtained by European forwarders.) shipper customers. In Europe, obviously, NVOCCs also follow These forwarder practices merit some review in the U.S. with the U.S. model, but the difference is that ocean carriers still pro- the objective of encouraging their use in the U.S. As noted, U.S. vide rate structures to forwarders, which are not necessarily FMC NVOCCs which are selling transport to U.S. importers and ar- licensed or registered with the FMC, and we have noticed an in- ranging transportation with the above described European for- crease of this type of pricing structure. warders should at this time be cautious as to how these transac-

European forwarders are now aggressively selling rate struc- tions are structured so as to ensure compliance with current U.S. tures, not only to shippers, but also to U.S. NVOCCs. The U.S. shipping laws and regulations.

NVOCCs are those who generally control consignee “collect” cargo in the U.S. either as NVOCCs or sometimes as customs brokers, but who do not have competitive enough rates directly

The Author with the relevant ocean carriers. To underscore that this practice Carlos Rodriguez is institutionalized commercially by ocean carriers, we have re- is a Washington-based partner with the law frm Husch Blackwell viewed ocean carrier tariff rate sheets applicable in the U.S. trade

LLP. He practices in the International Trade & Supply Chain lanes which are specifed exclusively for “forwarders” in specifc group of the frm’s Technology, Manufacturing & Transportation locations in Europe, without reference as to whether or not they industry team.