A Continental Oil Company spokesman has announced the signing of a participation agreement with the British Government concerning oil production licenses in the North Sea and called the arrangement a "mutually beneficial one." Jack Reynolds, chairman of Continental Oil Company, Ltd., said the agreement will be a continuation of Conoco's "long and excellent relationship with the British Government." Conoco, Gulf Oil and the British National Oil Corporation each has had a one-third interest in the licenses, with Conoco the operator.

Under the new agreement, Conoco and Gulf each has transferred to BNOC a percentage of their title to the licenses, increasing BNOC's share of the license title from one-third to 51 percent. Existing arrangements covering capital investments, ownership ownership of produced oil and decision-making, under which the three parties have equal voting rights and obligations, have not been modified. Thus, Mr. Reynolds emphasized, Conoco's economic interest remains unchanged.

Also, BNOC has the option to buy from Conoco and Gulf, at market prices, a share of their oil production from the license areas sufficient to increase BNOC's total share of oil at each location from one-third to 51 percent (excluding royalty oil).

All past and future oil discoveries under existing licenses will be subject to the agreement, and no further participation in these licenses with respect to oil is to be sought by the Government, Mr. Reynolds said.

Natural gas production from the Viking Field in the southern sector of the North Sea is not affected by the agreement. 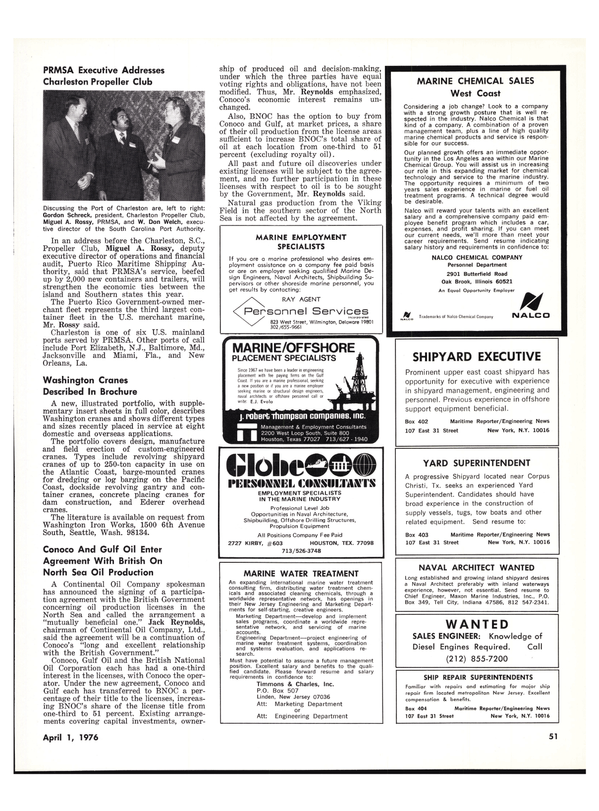