Halifax Shipyard is building a $30-million self-righting drill rig for a consortium of oil companies for use in the North Sea, to be delivered this summer. Construction is to follow of a $40-million dynamically positioning drillship for a similar group scheduled for delivery by mid-1977.

Vancouver Shipyards Co. Ltd. is at present outfitting a $4-million 140-foot seagoing tug for Seaspan Overseas Ltd. of Hamilton, Bermuda, for delivery the end of May. In addition, the yard is filling an order from Guatemala for two general purpose barges and a further $1.5-million contract from Seaspan International for two 4,000-toncapacity barges for delivery this summer.

One East Coast yard with a solid workload ahead of it is Saint John Shipbuilding and Dry Dock Co. Ltd. of Saint John, New Brunswick. Its third of four 37,500-ton product carriers it is building for Esso Tankers Inc. of New York was christened in February, and work is well along on the fourth.

The yard will build another similar carrier for Swann Oil Co. of Philadelphia, Pa., before starting construction of six 31,000-ton tankers for Shell (Bermuda) Ltd. for delivery completion by the end of 1978.

Marine Industries Ltd., at its Sorel, Quebec, plant, is completing the last four of six 17,000 Marindus cargo vessels for Societe Navale Chargeurs Delmas-Vieljeux of France. The yard has started construction on the first of two 17,000-ton cargo carriers it is building for the Algerian National Shipping Corp. for November delivery. It also has on the books orders for 10 of the 17,000- ton cargo liners for Greek owner Karageorgis SA of Piraeus, and three 10,000-ton tankers for Cuba. "Canadian yards have always got orders on a combination of price, delivery and credit," says William White, vice president-shipbuilding of Marine Industries.

He added that MIL will be taking a good look at the company's 17,000-ton general cargo ship design with the idea of going to market with updated or revised versions in 1977.

Altogether, aside from these and other export orders, Canada's yards are currently building a substantial number of vessels of various types, from an Arctic type 28,000- ton bulk carrier for the Federal Government, to coastal ferries, self-unloaders for the West Coast lumber industry as well as for Great Lakes use and others, both on account of Canadian/owners and Federal or Provincial Government agencies.

Furthering promotion of its capabilities to fill foreign orders, Canada's shipbuilding, repairing and marine components industry, sponsored by the Canadian Department of Industry, Trade and Commerce, will be represented with exhibits at "Posidonia '76," the international marine trade exhibition being held June 7-12 in Piraeus, Greece. 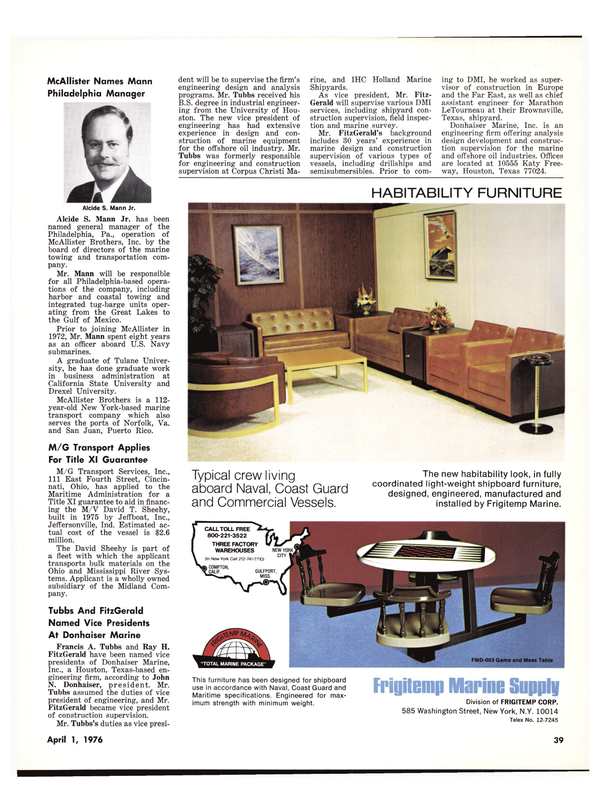