The February Meeting of the Los Angeles Metropolitan Section of The Society of Naval Architects and Marine Engineers was held aboard the S.S. Princess Louise I. Thirty-five members and guests turned out for the occasion.

The evening's speaker was Raymond E. Wallace, of Raymond E. Wallace Special Productions, well-known for his master planning efforts which produced all of the ship's and marine effects at Disneyland. He was also master planner for the Ports O'Call Village in San Pedro, Calif.; the Six Flags Over Texas complex, and the conversion of the S.S. Princess Louise I and II Restaurants.

The topic of his presentation was the conversion of an existing schooner hull to a replica of the brig Pilgrim. The Pilgrim is wellknown in maritime lore as the ship featured in Richard Henry Dana Jr.'s book "Two Years Before the Mast." Mr. Wallace began by describing his own experiences "before the mast," wherein he spent 15 years sailing aboard square rigged ships. This background, and his devotion to the sea and nautical lore, provided the basis for his goal of the re-creation of the Pilgrim.

He began the task with a suitable hull he found in Denmark.

The Joal, a Baltic schooner constructed in the late 1800s, was similar to Dana's description of the Pilgrim, except that she was a double ender and has finer lines (the Pilgrim had an "Apple Bow" and a full stern gallery). The Joal had been converted to a motorship and dismasted except for the foremast which had been retained for use as a cargo boom.

He surveyed her hull, found it sound, and designed the modifications that would be required to convert her to closely match the description Dana gave of the Pilgrim.

Mr. Wallace sailed the Joal to Portugal for the start of her conversion.

He had been impressed with the capabilities of the Danish craftsmen, particularly their proficiency with the adze, but economics compelled him to seek a location with a cheaper, but no less capable, labor force.

It took a full year to step new masts and otherwise prepare the Joal for her trans-Atlantic voyage.

The next port-of-call was Miami, where her woodwork was completed, and she was rigged to fit Dana's description as "having royals and skysails fore and aft, and ten studding sails." She was re-commissioned the Pilgrim and is now berthed in San Pedro awaiting her final journey to Monterey, Calif. There, she will be berthed at the end of Fisherman's Pier and opened to the public as a maritime museum.

Mr. Wallace is currently converting the 3,000-ton four-masted bark, Moshulu, a principal in the "Great Grain Races" of the 1930s, into a restaurant and museum to be berthed at Penn's Landing in Philadelphia, Pa. 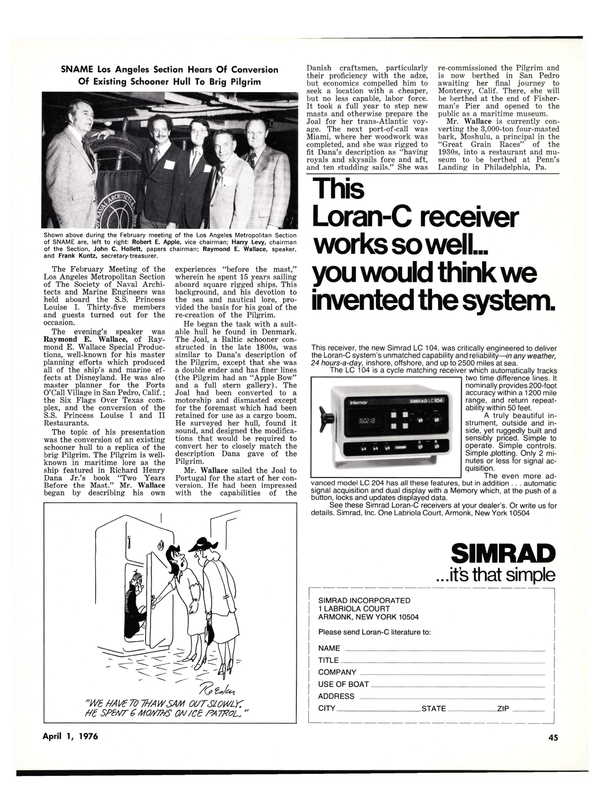