Raymond T. Greene has announced the formation of a new company to be known as Anchorage Marine Brokerage and Documentation, Incorporated, which will specialize in sale, purchase, and chartering of commercial vessels, and in the documentation and registry of vessels in foreign jurisdictions, and especially the islands and countries of the Greater Caribbean area.

Mr. Greene has most recently served as president of Anchorage Ship Sales and Documentation, Incorporated which, because of the personal choice of some of its principals, is now being liquidated. Prior to that, he has served variously as organizer and executive officer of a stevedoring company, a terminal operation, and a shipyard in the area, all of which are still most active and successful. All of this followed a most successful career in New York City as one of the outstanding international admiralty lawyers in the United States.

In this new venture, Mr. Greene will be joined by his son, Kevin, who holds a Florida State Yacht and Ship Brokers license. During the past 10 years, Kevin has had a most thorough training in the marine field, having served an apprenticeship in a local shipyard, as a warehouse supervisor, as a stevedoring coordinator, and most recently as a marine surveyor under the tutelage of the late Alfred M. Nelson.

Assuming the duties of secretary and office manager will be Sarah Rushing, who also boasts of a varied marine training in both shipyard administration and surveying office work.

Within the month, several other wellknown local marine figures will be joining the Anchorage staff. 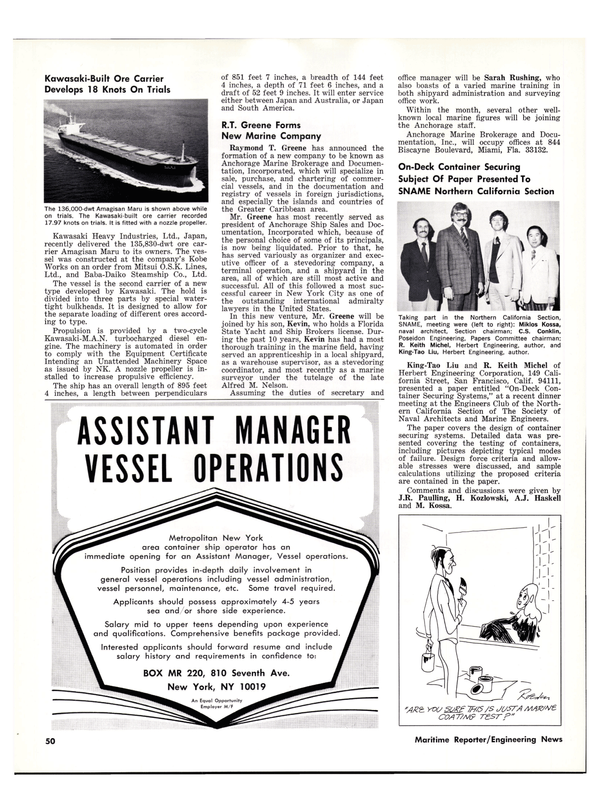