Dual keel-layings were accomplished on March 2 for the largest contract in Lockheed Shipbuilding and Construction Company's history — the $253-million construction of two submarine tenders for the U.S. Navy.

The contract was signed late in 1974, and program start-up efforts gradually built up momentum through 1975. Submarine tenders are now utilizing more than half of the Lockheed Shipbuilding work force and, along with other company programs, promise shipyard employment of 2,000 to 3,000 employees into 1978.

Previously, the Hon. J Wm. Middendorf II, Secretary of the Navy, approved names for the new submarine tenders which honor submarine pioneers in the United States. The names announced during keel-laying were Emory S. Land, AS-39, and Frank Cable, AS-40. Vice Admiral Land's submarine contributions to the Navy from 1916 through World War II earned him the Navy Cross and Distinguished Service Medal. Mr. Cable was associated with the first submarine, Holland, accepted by the Navy in 1900, and founded the Electric Boat Company which has built more than half of the submarines used by the U.S. He was active at Electric Boat until his death in 1945 at the age of 82.

Delivery of the 643-foot-long, 13,840-ton displacement AS-39 is scheduled in 1978, with AS-40 following in 1979. These large vessels contain 875 compartment/spaces and, with a crew of 1,351 officers and men, will support and service SSN 688-Class subma- steam turbines and reduction gears, developing 20,000 shp. Sustained sea speed will be 18 knots. Four DeLaval ship-service turbogenerators will provide 2,500 kw of electric power.

To embrace improved shipbuilding technology and meet requirements for construction of the submarine tenders, LSCC is adding facilities and improvements which will cost approximately $2 million. 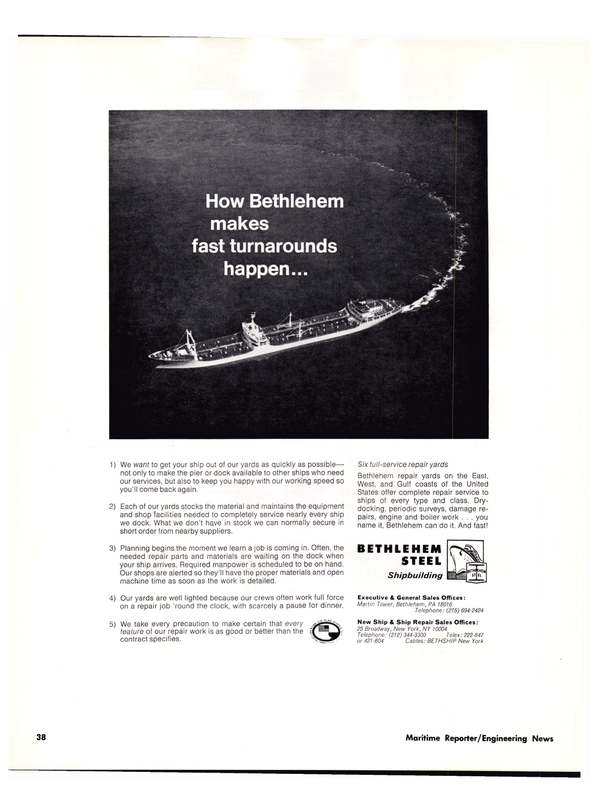