The newest addition to a fleet of 50 shrimp boats, the 75-footlong by 20-foot-wide by 10-footdeep vessel has a fuel capacity of 12,500 gallons and a freshwater supply of 2,500 gallons. The fish hold can handle 2,600 cubic feet of shrimp.

The main engine on this vessel is a Kelvin Model TASC8 marine diesel engine rated at 415 shp at 1,200 rpm. This engine is a 4-stroke cycle, direct injection, t u r b o c h a r g e d and after-cooled type and drives a Reintjes gearbox with a 4.824:1 ratio.

Main engine throttle and shaft controls for the pilothouse are Morse Type "Twin S." Two JABSCO electric clutch l1/^" pumps are utilized for bilge pumping; one pump belt driven from the front P.T.O. on the main engine and the other one is driven by a Lister diesel engine which is also used for chain and sprocket emergency pickup on a hoister shaft.

The t a i l s h a f t is stainless-steel type 17-4 PH, and the propeller is a Federal Bronze, four-bladetype, 68-inch-diameter by 68-inchpitch driving through a Michigan wheel ducted system.

Fresh water is delivered by a Lerio 32V DC pressure set. The automatic pilot is Model 15B "Wood Freeman" directly connected to the steering wheel. The sounder is a Morrow Model 2001 depth sounder with transducer.

Two radios are onboard; one a Patterson 310SSB and one Pierce- Simpson VHF. A Cobra SSB CB is also installed along with a Raytheon radar system.

Kelvin Diesels are manufactured in Scotland, and are sold and serviced by Alco Industrial Power, Inc., a subsidiary of Alco Power Inc., a leading American manufacturer of diesel engines, which is also a subsidiary of GEC Diesels Limited of Newton-le- Willows, England. Alco Industrial Power, Inc., has offices and warehouse in Houston, Texas, and is at present actively engaged in setting up a distribution network for the sales and service of the Kelvin range of marine engines in the United States. 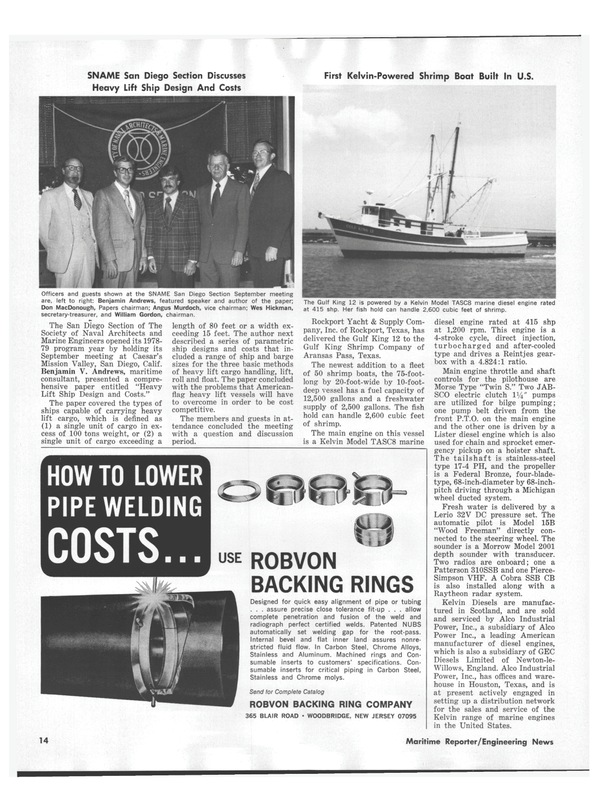