According to Herman H. Oosterhuis, president of Oosterhuis Industries, the Mitsubishi marine engines handled by his firm are all of original Mitsubishi design and include the Daiya diesel, a 900-rpm heavy-duty, inline engine available up to maximum 1,100 shaft horsepower.

Other Mitsubishi engines available through Oosterhuis include the Mitsubishi "SB", "SA," and "SN" Series, a high-speed, 4-stroke diesel, economical on fuel, with ratings of 250 horsepower continuously up to maximum 1,600 horsepower at 1,800 rpm for marine application. The "S" Series is available in 6- and 8-cylinder in-line and 12- and 16- cylinder vee-type versions.

Mr. Oosterhuis stated there are Mitsubishi engines already sold and being delivered by his firm, and that an extensive spare parts inventory has been established. Dealers handling parts and service are being appointed by Oosterhuis as far away as Brownsville, Texas.

Marine Engineering, Incorporated, an affiliated company of Oosterhuis, has been appointed dealer for the New Orleans, La., area. Arrangements have also been made with established firms for prompt service and parts supplies in East Coast, West Coast and Mexican areas. 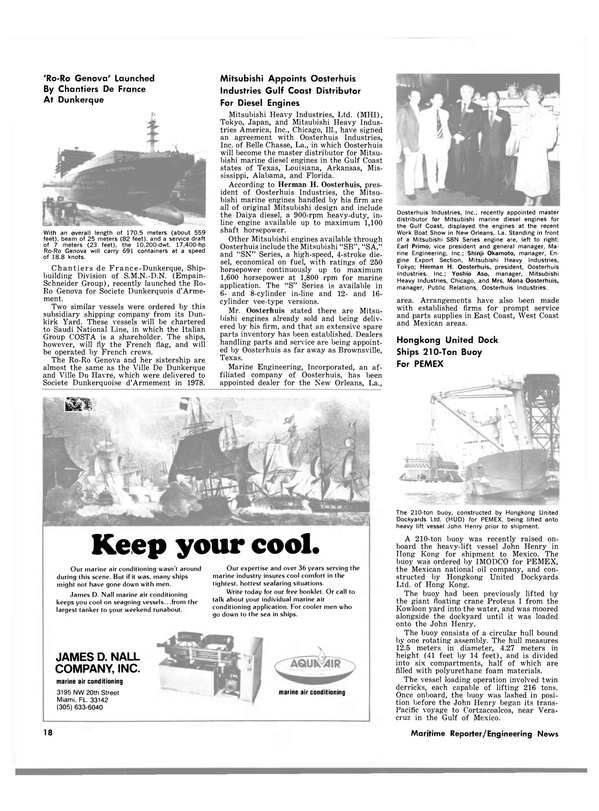