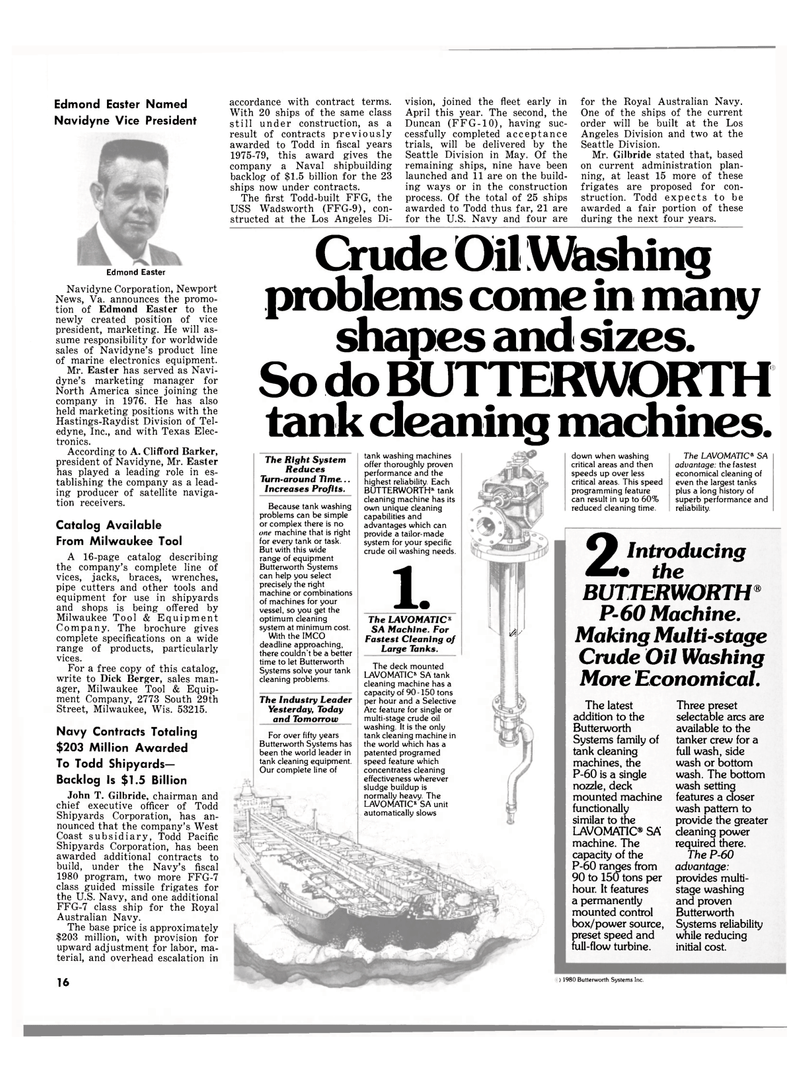 With 20 ships of the same class still under construction, as a result of contracts previously- awarded to Todd in fiscal years 1975-79, this award gives the company a Naval shipbuilding backlog of $1.5 billion for the 23 ships now under contracts.

The first Todd-built FFG, the

April this year. The second, the

Duncan (FFG-10), having suc- cessfully completed acceptance trials, will be delivered by the

Seattle Division in May. Of the remaining ships, nine have been launched and 11 are on the build- ing ways or in the construction process. Of the total of 25 ships awarded to Todd thus far, 21 are for the U.S. Navy and four are for the Royal Australian Navy.

Angeles Division and two at the

Mr. Gilbride stated that, based on current administration plan- ning, at least 15 more of these frigates are proposed for con- struction. Todd expects to be awarded a fair portion of these during the next four years.

News, Ya. announces the promo- tion of Edmond Easter to the newly created position of vice president, marketing. He will as- sume responsibility for worldwide sales of Navidyne's product line of marine electronics equipment.

Mr. Easter has served as Navi- dyne's marketing manager for

North America since joining the company in 1976. He has also held marketing positions with the

According to A. Clifford Barker, president of Navidyne, Mr. Easter has played a leading role in es- tablishing the company as a lead- ing producer of satellite naviga- tion receivers.

A 16-page catalog describing the company's complete line of vices, jacks, braces, wrenches, pipe cutters and other tools and equipment for use in shipyards and shops is being offered by

Shipyards Corporation, has an- nounced that the company's West

Shipyards Corporation, has been awarded additional contracts to build, under the Navy's fiscal 1980 program, two more FFG-7 class guided missile frigates for the U.S. Navy, and one additional

FFG-7 class ship for the Royal

The base price is approximately $203 million, with provision for upward adjustment for labor, ma- terial, and overhead escalation in 16

Crude Oil Washing problems come in many shapes and sizes.

So do BUTTERWORTH tank cleaning machines.

Because tank washing problems can be simple or complex there is no one machine that is right for every tank or task.

But with this wide range of equipment

Butterworth Systems can help you select precisely the right machine or combinations of machines for your vessel, so you get the optimum cleaning system at minimum cost.

With the IMCO deadline approaching, there couldn't be a better time to let Butterworth

For over fifty years

Butterworth Systems has been the world leader in tank cleaning equipment.

Our complete line of tank washing machines offer thoroughly proven performance and the highest reliability. Each

BUTTERWORTH* tank cleaning machine has its own unique cleaning capabilities and advantages which can provide a tailor-made system for your specific crude oil washing needs. 1.

Arc feature for single or multi-stage crude oil washing. It is the only tank cleaning machine in the world which has a patented programed speed feature which concentrates cleaning effectiveness wherever sludge buildup is normally heavy. The

LAVOMATIC* SA unit automatically slows down when washing critical areas and then speeds up over less critical areas. This speed programming feature can result in up to 60% reduced cleaning time.

The LAVOMATIC* SA advantage: the fastest economical cleaning of even the largest tanks plus a long history of superb performance and reliability.

The latest addition to the

P-60 is a single nozzle, deck mounted machine functionally similar to the

LAVOMATIC® SA machine. The capacity of the

Three preset selectable arcs are available to the tanker crew for a full wash, side wash or bottom wash. The bottom wash setting features a closer wash pattern to provide the greater cleaning power required there.