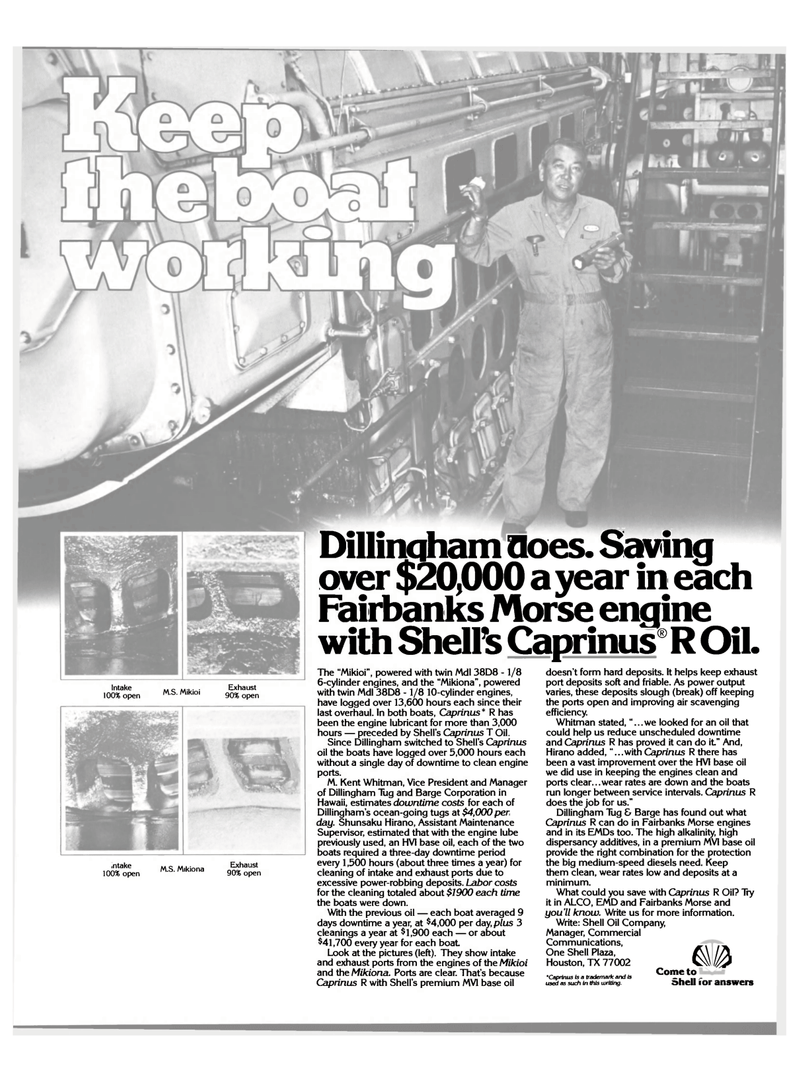 Dillinqhamdoes. Saving over $20,000 a year in each

Since Dillingham switched to Shell's Caprinus oil the boats have logged over 5,000 hours each without a single day of downtime to clean engine ports.

Hawaii, estimates downtime costs for each of

Supervisor, estimated that with the engine lube previously used, an HVI base oil, each of the two boats required a three-day downtime period every 1,500 hours (about three times a year) for cleaning of intake and exhaust ports due to excessive power-robbing deposits. Labor costs for the cleaning totaled about $1900 each time the boats were down.

Look at the pictures (left). They show intake and exhaust ports from the engines of the Mikioi and the Mikiona. Ports are clear. That's because

Whitman stated, "...we looked for an oil that could help us reduce unscheduled downtime and Caprinus R has proved it can do it" And,

Hirano added, "...with Caprinus R there has been a vast improvement over the HVI base oil we did use in keeping the engines clean and ports clear...wear rates are down and the boats run longer between service intervals. Caprinus R does the job for us."

Dillingham Tug & Barge has found out what

Caprinus R can do in Fairbanks Morse engines and in its EMDs too. The high alkalinity, high dispersancy additives, in a premium MVI base oil provide the right combination for the protection the big medium-speed diesels need. Keep them clean, wear rates low and deposits at a minimum.

What could you save with Caprinus R Oil? Try it in ALCO, EMD and Fairbanks Morse and you'll know. Write us for more information.

One Shell Plaza, A\ A