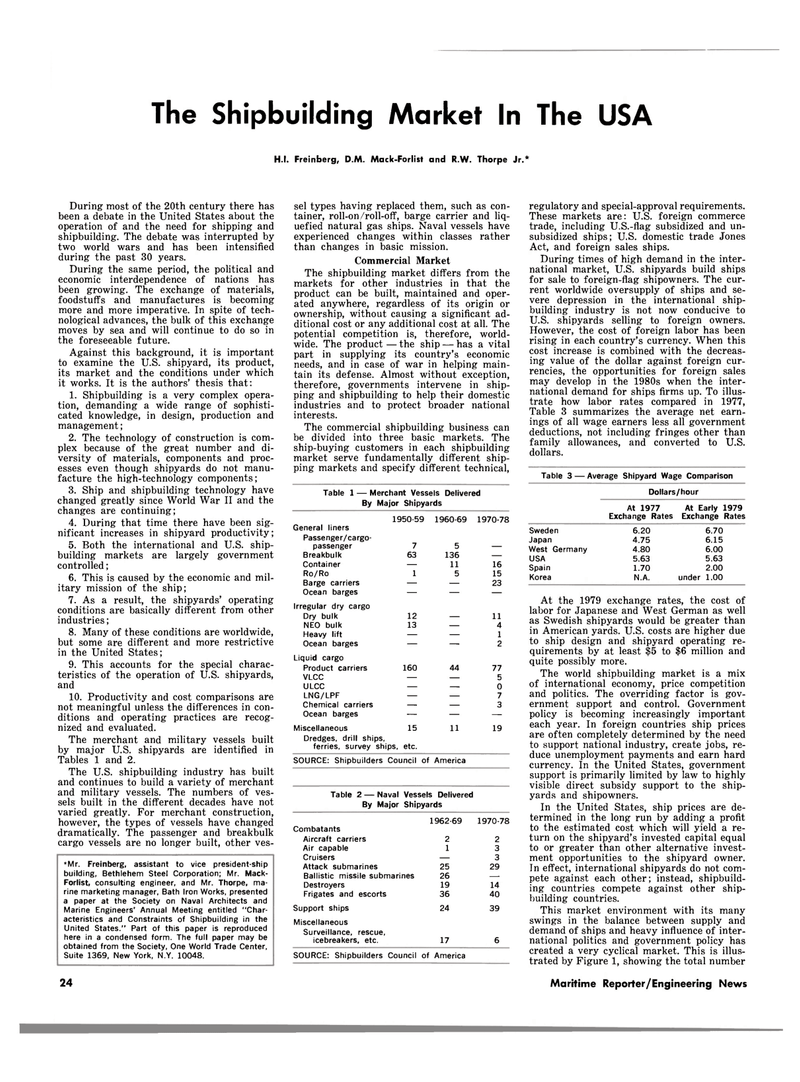 The Shipbuilding Market In The USA

During most of the 20th century there has been a debate in the United States about the operation of and the need for shipping and shipbuilding. The debate was interrupted by two world wars and has been intensified during the past 30 years.

During the same period, the political and economic interdependence of nations has been growing. The exchange of materials, foodstuffs and manufactures is becoming more and more imperative. In spite of tech- nological advances, the bulk of this exchange moves by sea and will continue to do so in the foreseeable future.

Against this background, it is important to examine the U.S. shipyard, its product, its market and the conditions under which it works. It is the authors' thesis that: 1. Shipbuilding is a very complex opera- tion, demanding a wide range of sophisti- cated knowledge, in design, production and management; 2. The technology of construction is com- plex because of the great number and di- versity of materials, components and proc- esses even though shipyards do not manu- facture the high-technology components; 3. Ship and shipbuilding technology have changed greatly since World War II and the changes are continuing; 4. During that time there have been sig- nificant increases in shipyard productivity; 5. Both the international and U.S. ship- building markets are largely government controlled; 6. This is caused by the economic and mil- itary mission of the ship; 7. As a result, the shipyards' operating conditions are basically different from other industries; 8. Many of these conditions are worldwide, but some are different and more restrictive in the United States; 9. This accounts for the special charac- teristics of the operation of U.S. shipyards, and 10. Productivity and cost comparisons are not meaningful unless the differences in con- ditions and operating practices are recog- nized and evaluated.

The merchant and military vessels built by major U.S. shipyards are identified in

The U.S. shipbuilding industry has built and continues to build a variety of merchant and military vessels. The numbers of ves- sels built in the different decades have not varied greatly. For merchant construction, however, the types of vessels have changed dramatically. The passenger and breakbulk cargo vessels are no longer built, other ves- sel types having replaced them, such as con- tainer, roll-on/roll-off, barge carrier and liq- uefied natural gas ships. Naval vessels have experienced changes within classes rather than changes in basic mission.

The shipbuilding market differs from the markets for other industries in that the product can be built, maintained and oper- ated anywhere, regardless of its origin or ownership, without causing a significant ad- ditional cost or any additional cost at all. The potential competition is, therefore, world- wide. The product — the ship — has a vital part in supplying its country's economic needs, and in case of war in helping main- tain its defense. Almost without exception, therefore, governments intervene in ship- ping and shipbuilding to help their domestic industries and to protect broader national interests.

During times of high demand in the inter- national market, U.S. shipyards build ships for sale to foreign-flag shipowners. The cur- rent worldwide oversupply of ships and se- vere depression in the international ship- building industry is not now conducive to

However, the cost of foreign labor has been rising in each country's currency. When this cost increase is combined with the decreas- ing value of the dollar against foreign cur- rencies, the opportunities for foreign sales may develop in the 1980s when the inter- national demand for ships firms up. To illus- trate how labor rates compared in 1977,

Table 3 summarizes the average net earn- ings of all wage earners less all government deductions, not including fringes other than family allowances, and converted to U.S. dollars.

At the 1979 exchange rates, the cost of labor for Japanese and West German as well as Swedish shipyards would be greater than in American yards. U.S. costs are higher due to ship design and shipyard operating re- quirements by at least $5 to $6 million and quite possibly more.

The world shipbuilding market is a mix of international economy, price competition and politics. The overriding factor is gov- ernment support and control. Government policy is becoming increasingly important each year. In foreign countries ship prices are often completely determined by the need to support national industry, create jobs, re- duce unemployment payments and earn hard currency. In the United States, government support is primarily limited by law to highly visible direct subsidy support to the ship- yards and shipowners.

In the United States, ship prices are de- termined in the long run by adding a profit to the estimated cost which will yield a re- turn on the shipyard's invested capital equal to or greater than other alternative invest- ment opportunities to the shipyard owner.

This market environment with its many swings in the balance between supply and demand of ships and heavy influence of inter- national politics and government policy has created a very cyclical market. This is illus- trated by Figure 1, showing the total number ZIDELL Maritime Reporter/Engineering News •Mr. Freinberg, assistant to vice president-ship building, Bethlehem Steel Corporation; Mr. Mack-

United States." Part of this paper is reproduced here in a condensed form. The full paper may be obtained from the Society, One World Trade Center,