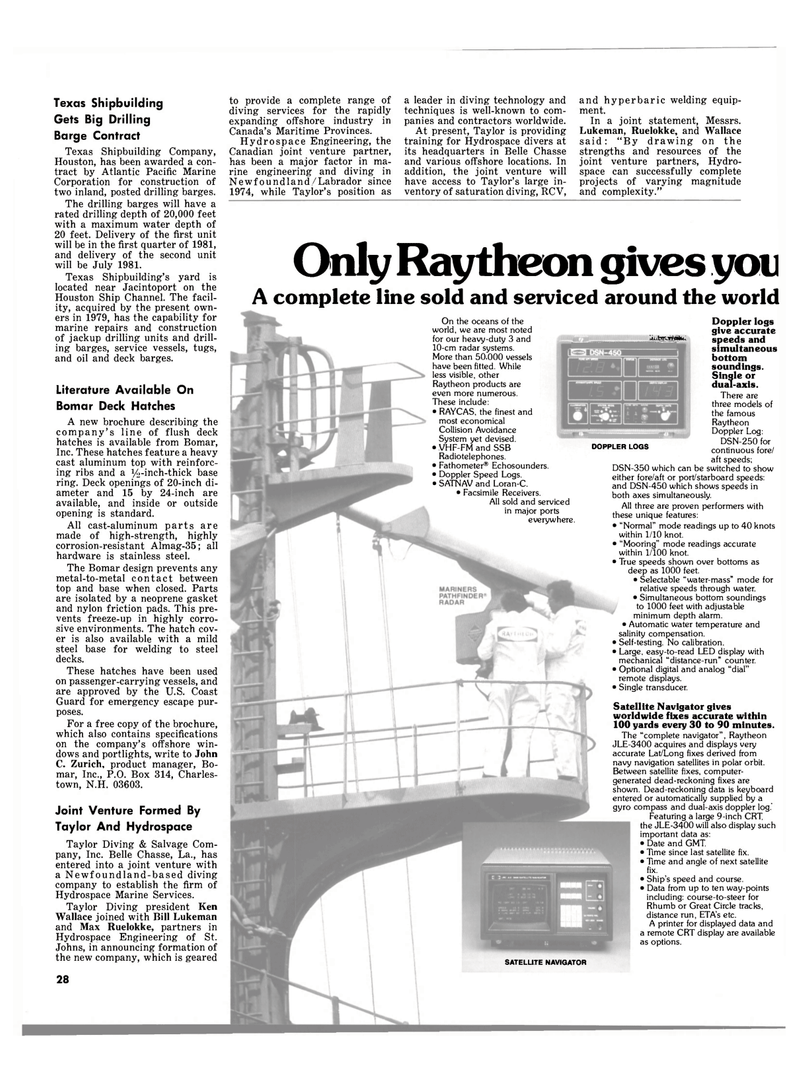 Houston, has been awarded a con- tract by Atlantic Pacific Marine

Houston Ship Channel. The facil- ity, acquired by the present own- ers in 1979, has the capability for marine repairs and construction of jackup drilling units and drill- ing barges, service vessels, tugs, and oil and deck barges.

A new brochure describing the company's line of flush deck hatches is available from Bomar,

Inc. These hatches feature a heavy cast aluminum top with reinforc- ing ribs and a y^-inch-thick base ring. Deck openings of 20-inch di- ameter and 15 by 24-inch are available, and inside or outside opening is standard.

All cast-aluminum parts are made of high-strength, highly corrosion-resistant Almag-35; all hardware is stainless steel.

The Bomar design prevents any metal-to-metal contact between top and base when closed. Parts are isolated by a neoprene gasket and nylon friction pads. This pre- vents freeze-up in highly corro- sive environments. The hatch cov- er is also available with a mild steel base for welding to steel decks.

These hatches have been used on passenger-carrying vessels, and are approved by the U.S. Coast

For a free copy of the brochure, which also contains specifications on the company's offshore win- dows and portlights, write to John

Taylor Diving & Salvage Com- pany, Inc. Belle Chasse, La., has entered into a joint venture with a Newfoundland-based diving company to establish the firm of

Wallace joined with Bill Lukeman and Max Ruelokke, partners in

Johns, in announcing formation of the new company, which is geared 28 to provide a complete range of diving services for the rapidly expanding offshore industry in

Canadian joint venture partner, has been a major factor in ma- rine engineering and diving in

Newfoundland/Labrador since 1974, while Taylor's position as a leader in diving technology and techniques is well-known to com- panies and contractors worldwide.

At present, Taylor is providing training for Hydrospace divers at its headquarters in Belle Chasse and various offshore locations. In addition, the joint venture will have access to Taylor's large in- ventory of saturation diving, RCV, and hyperbaric welding equip- ment.

In a joint statement, Messrs.

Lukeman, Ruelokke, and Wallace said: "By drawing on the strengths and resources of the joint venture partners, Hydro- space can successfully complete projects of varying magnitude and complexity."

On the oceans of the world, we are most noted for our heavy-duty 3 and 10-cm radar systems.

More than 50.000 vessels have been fitted. While less visible, other

Raytheon products are even more numerous.

These include: • RAYCAS, the finest and most economical

System yet devised. • VHF-FM and SSB

All sold and serviced in major ports everywhere.

There are three models of the famous

DSN-350 which can be switched to show either fore/aft or port/starboard speeds: and DSN-450 which shows speeds in both axes simultaneously.

Featuring a large 9-inch CRT, the JLE-3400 will also display such important data as: • Date and GMT. • Time since last satellite fix. • Time and angle of next satellite fix. • Ship's speed and course. • Data from up to ten way-points including: course-to-steer for

A printer for displayed data and a remote CRT display are available as options.

Only Raytheon gives you

A complete line sold and serviced around the world