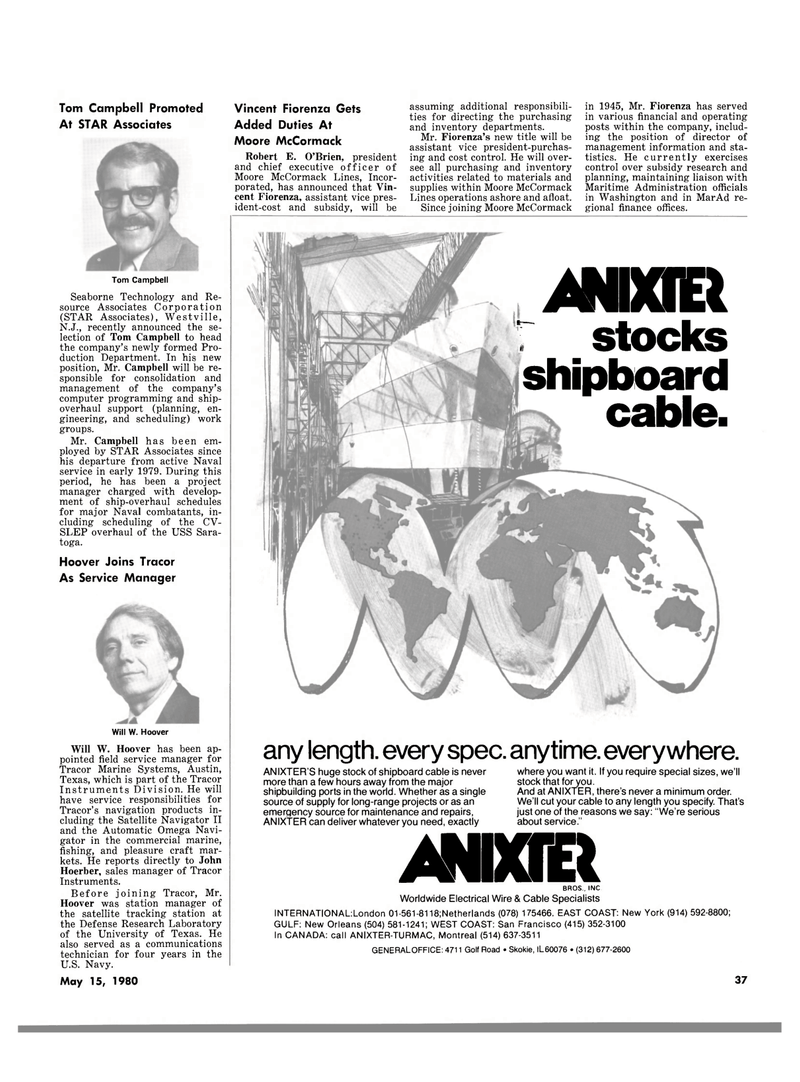 Mr. Fiorenza's new title will be assistant vice president-purchas- ing and cost control. He will over- see all purchasing and inventory activities related to materials and supplies within Moore McCormack

Since joining Moore McCormack in 1945, Mr. Fiorenza has served in various financial and operating posts within the company, includ- ing the position of director of management information and sta- tistics. He currently exercises control over subsidy research and planning, maintaining liaison with

Maritime Administration officials in Washington and in MarAd re- gional finance offices.

N.J., recently announced the se- lection of Tom Campbell to head the company's newly formed Pro- duction Department. In his new position, Mr. Campbell will be re- sponsible for consolidation and management of the company's computer programming and ship- overhaul support (planning, en- gineering, and scheduling) work groups.

Mr. Campbell has been em- ployed by STAR Associates since his departure from active Naval service in early 1979. During this period, he has been a project manager charged with develop- ment of ship-overhaul schedules for major Naval combatants, in- cluding scheduling of the CV-

Will W. Hoover has been ap- pointed field service manager for

Texas, which is part of the Tracor

Instruments Division. He will have service responsibilities for

Tracor's navigation products in- cluding the Satellite Navigator II and the Automatic Omega Navi- gator in the commercial marine, fishing, and pleasure craft mar- kets. He reports directly to John

Hoover was station manager of the satellite tracking station at the Defense Research Laboratory of the University of Texas. He also served as a communications technician for four years in the

ANIXTER'S huge stock of shipboard cable is never more than a few hours away from the major shipbuilding ports in the world. Whether as a single source of supply for long-range projects or as an emergency source for maintenance and repairs,

ANIXTER can deliver whatever you need, exactly where you want it. If you require special sizes, we'll stock that for you.

And at ANIXTER, there's never a minimum order.

We'll cut your cable to any length you specify. That's just one of the reasons we say: "We're serious about service." jmei