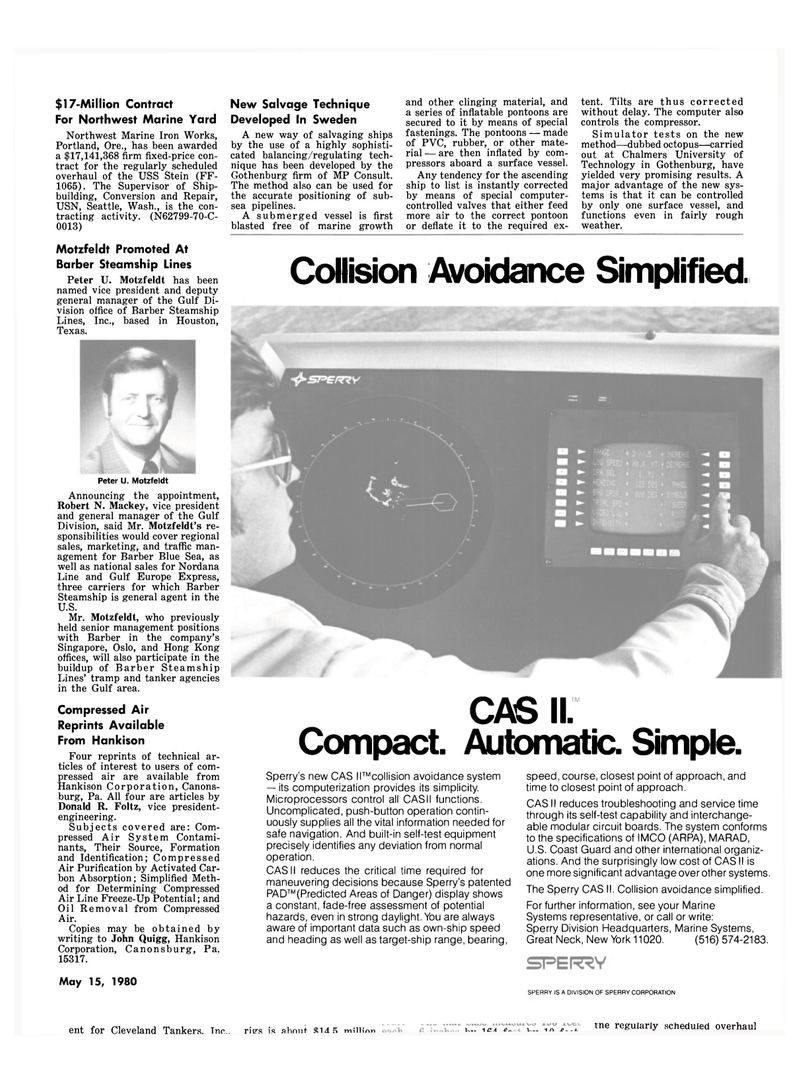 Portland, Ore., has been awarded a $17,141,368 firm fixed-price con- tract for the regularly scheduled overhaul of the USS Stein (FF- 1065). The Supervisor of Ship- building, Conversion and Repair,

Peter U. Motzfeldt has been named vice president and deputy general manager of the Gulf Di- vision office of Barber Steamship

Lines, Inc., based in Houston,

The method also can be used for the accurate positioning of sub- sea pipelines.

A submerged vessel is first blasted free of marine growth and other clinging material, and a series of inflatable pontoons are secured to it by means of special fastenings. The pontoons — made of PVC, rubber, or other mate- rial — are then inflated by com- pressors aboard a surface vessel.

Any tendency for the ascending ship to list is instantly corrected by means of special computer- controlled valves that either feed more air to the correct pontoon or deflate it to the required ex- tent. Tilts are thus corrected without delay. The computer also controls the compressor.

Technology in Gothenburg, have yielded very promising results. A major advantage of the new sys- tems is that it can be controlled by only one surface vessel, and functions even in fairly rough weather.

Line and Gulf Europe Express, three carriers for which Barber

Steamship is general agent in the

Mr. Motzfeldt, who previously held senior management positions with Barber in the company's

Singapore, Oslo, and Hong Kong offices, will also participate in the buildup of Barber Steamship

Lines' tramp and tanker agencies in the Gulf area.

Hankison Corporation, Canons- burg, Pa. All four are articles by

Copies may be obtained by writing to John Quigg, Hankison

U.S. Coast Guard and other international organiz- ations. And the surprisingly low cost of CAS II is one more significant advantage over other systems.

For further information, see your Marine

Systems representative, or call or write: