The new flagship of the German merchant fleet, the luxury liner M / V Europa, recently completed almost three days of sea trials in the North Sea. The 35,000-grt liner is scheduled to undertake her maiden voyage on January 8, 1982.

The vessel was built by Bremer Vulkan shipyard, Bremen, West Germany, and was launched and christened on December 22, 1980.

KG, from which Hapag-Lloyd AG will be taking her on timecharters when she enters into service.

The Europa is powered by two Bremer Vulkan M.A.N. K7SZ 70 125 BL slow-speed reversible diesels, each with a maximum continuous output of 10,640 kw (2 by 14,460 hp) driving a fiveblade fixed-pitch propeller at a service speed of 21 knots. Cruising speed will normally be in the 14 to 18-knot range. The ship will accommodate 600 passengers and a crew of 275. Built to Germanischer Lloyd classification, the 656-foot-long cruise liner is the first newbuilding to be placed in passenger service by Hapag Lloyd since World War II.

The generating equipment comprises five diesel-driven generators which deliver a total 8,500 kw, plus two shaft generators driven by the main engines and designed to use surplus output while cruising. In addition, one emergency generator at 875 kva or 700 kw is supplied.

Besides the exhaust gas boilers linked with the main and auxiliary engines, the Europa is equipped with two oil-fired boilers each providing 12,500 kg/h of steam generation.

In addition to the luxurious surroundings, restaurants, and general ambiance, the design of the vessel i n c o r p o r a t e s many safety features. A double-skin c o n s t r u c t i o n was employed in housing the generating and propulsion machinery — including a separate watertight compartment f o r the former; modular construction was employed for the propulsion and generating machinery, switchgear, and steam generating plant, thus providing the required duplication; the engine room was fitted with a double carbon dioxide fire extinguisher system; the main fire bulkheads were built without air-conditioning vent breaks; and all passenger cabins were positioned above the bulkhead deck.

The Europa was subjected to extensive model testing for hydrodynamics and aerodynamics in order to optimize resistance, propulsion, behavior in heavy seas, maneuverability, propeller cavitation and oscillations, exhaust gas flow, and wind load. Equally exhaustive tests were made regarding static and dynamic behavior of the structural elements.

When the Europa was designed, special attention was paid to environmental protection, and as a result the ship satisfies all conceivable national and international requirements.

Wind tunnel tests were conducted so that passengers would not be exposed to exhaust gases on the open-air decks. This was achieved. The design and dimensions of the funnel keep away all exhaust gases.

There are a total of 11 exhaust outlets: two for the main engines, five for the diesel generators, one for the port emergency diesel, two for the auxiliary boilers, and one for the garbage incinerator.

Exhaust gas outlets from the garbage incinerator: soot and odors from this unit are also nonexistent on the open decks.

The garbage incinerator is fitted with nine parallel cyclones which separate ash on the gravity principle.

The following installations are provided to prevent oil pollution: two sloptanks for the storage and interception of bilge water; two oil extraction units for the separation of bilge water. The deoiled water conforms to the latest IMCO regulations for coastal waters (oil residue of less than 15 ppm ; and water pumped overboard by the extraction units is continually monitored. If permitted levels are exceeded, the installations automatically stop the discharge of oil-polluted water.

Oil residues are burnt in the garbage incinerator.

Garbage is collected by means of a shaft running underneath all the accommodation decks.

Facilities are also available aboard the Europa for the disposal of noncombustible solid objects such as bottles and cans. 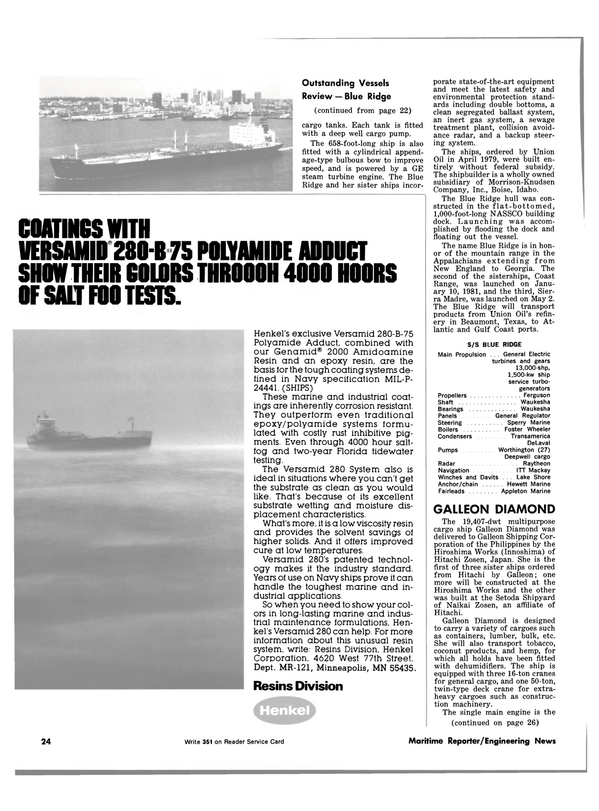 Other stories from December 1981 issue