Savannah, Georgia - April 17 - 20 The Radio Technical Commission for Maritime Services (RTCM) will hold its 1983 Annual Assembly Meeting April 17- 20 at the Hyatt Regency Hotel in Savannah, Ga. The Assembly is being hosted by the United States Power Squadrons.

During the Assembly there will be special committee meetings and some 26 technical papers will be presented, based on the theme "Maritime Telecommunications— Today and Tomorrow." The RTCM was established in 1947 as a government/industry organization under the aegis of the Department of State. In 1972, after passage of the Federal Advisory Committee Act, it became a Federal Advisory Committee chartered by the Federal Communications Commission. Today, it is structured as a nonprofit, tax-exempt organization.

Today's RTCM is a streamlined version of the original RTCM and has inherited its mantle. All segments of the marine field—government, private industry, labor, environmentalists, consumers — are partners in providing a broadbased overview of the industry.

In the interest of Federal economies, government agencies no longer provide funding; however, as a privately supported organization, RTCM's goals remain the same: ". . . to advance the technical quality and professional application of maritime telecommunications for the benefit of all concerned . . ." "Telecommunications" as used by RTCM means any transmission, emission or reception of signs, signals, writing, images, and sounds or intelligence of any nature by wire, radio, optical, and other electromagnetic or visual systems.

Technical Papers The technical papers will be presented each day, April 18 through April 20, in eight sessions.

Following the technical sessions the electronic manufacturer's equipment display area will be open.

The papers to be presented are: "The Federal Government's Radionavigation Planning Process" by David C. Scull, U.S. Department of Transportation.

"The MarAd Program for Upgrading Reserve Fleet Telecommunications C a p a b i l i t i e s " by James C. McCoy, U.S. Maritime Administration.

"The QOSPAS/SARSAT Program — A summary of Performance of the 406 MHz System" by D. Levesque and Ph. Goudy, Centre National d'Etudes Spatiales (CNES), France.

"United Kingdom Overview of the Results of WARC 83" by Dr.

"Development of Digital Selective Calling in Norway" by P.

"Seaplan: A Service to Maritime Interests" by Louis M.

"Choosing a Satellite Constellation for the Search and Rescue Satellite System" by H.D. Black, A. Eisner and J.A. Piatt, The Johns Hopkins University, Applied Physics Laboratory.

"An International VHF-FM Maritime System — Do We Have It? Do We Need It? Do We Want I t ? " by C.H. Gray, communications consultant. 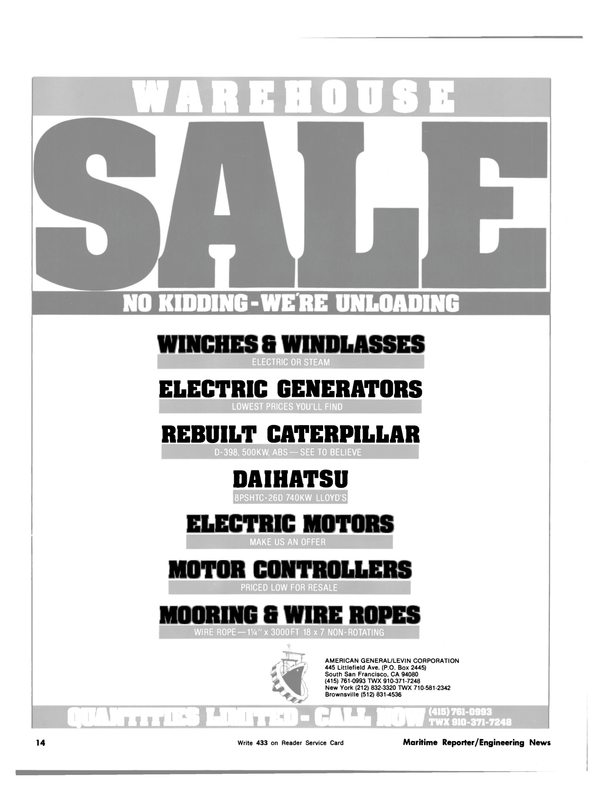