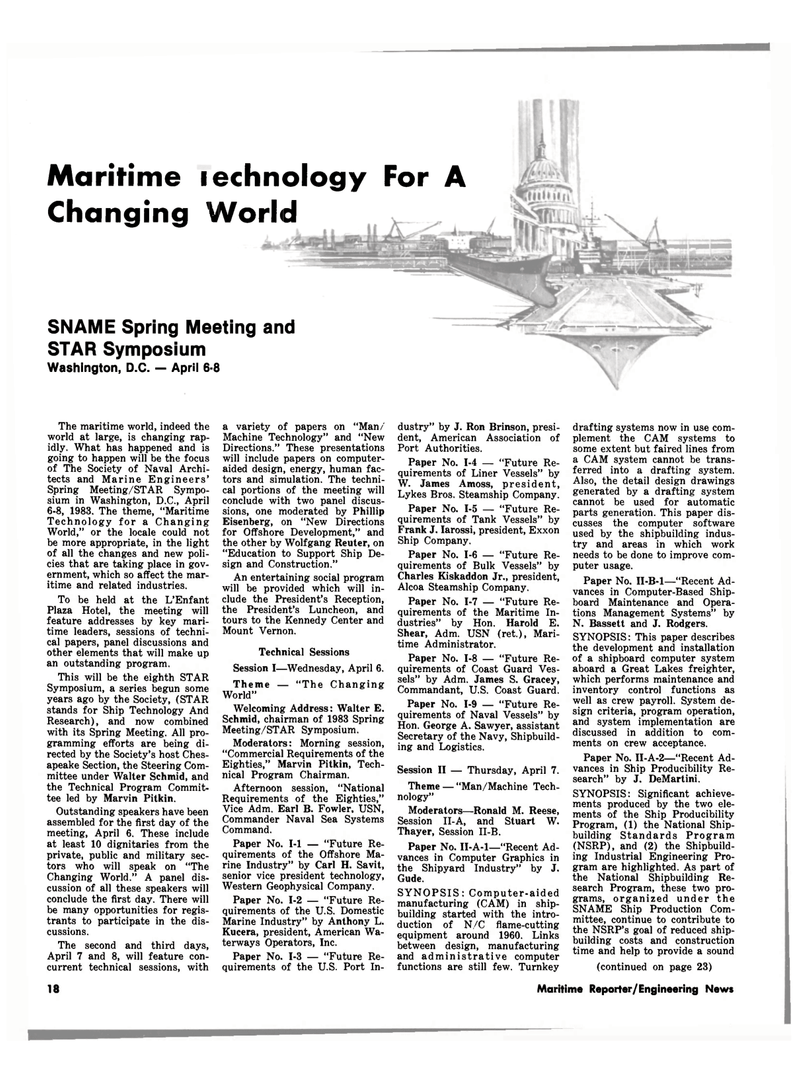 The maritime world, indeed the world at large, is changing rap- idly. What has happened and is going to happen will be the focus of The Society of Naval Archi- tects and Marine Engineers'

Technology for a Changing

World," or the locale could not be more appropriate, in the light of all the changes and new poli- cies that are taking place in gov- ernment, which so affect the mar- itime and related industries.

To be held at the L'Enfant

Plaza Hotel, the meeting will feature addresses by key mari- time leaders, sessions of techni- cal papers, panel discussions and other elements that will make up an outstanding program.

This will be the eighth STAR

Symposium, a series begun some years ago by the Society, (STAR stands for Ship Technology And

Research), and now combined with its Spring Meeting. All pro- gramming efforts are being di- rected by the Society's host Ches- apeake Section, the Steering Com- mittee under Walter Schmid, and the Technical Program Commit- tee led by Marvin Pitkin.

Outstanding speakers have been assembled for the first day of the meeting, April 6. These include at least 10 dignitaries from the private, public and military sec- tors who will speak on "The

Changing World." A panel dis- cussion of all these speakers will conclude the first day. There will be many opportunities for regis- trants to participate in the dis- cussions.

The second and third days,

April 7 and 8, will feature con- current technical sessions, with a variety of papers on "Man/'

Directions." These presentations will include papers on computer- aided design, energy, human fac- tors and simulation. The techni- cal portions of the meeting will conclude with two panel discus- sions, one moderated by Phillip

Eisenberg, on "New Directions for Offshore Development," and the other by Wolfgang Reuter, on "Education to Support Ship De- sign and Construction."

Requirements of the Eighties,"

Paper No. 1-3 — "Future Re- quirements of the U.S. Port In- dustry" by J. Ron Brinson, presi- dent, American Association of

Secretary of the Navy, Shipbuild- ing and Logistics.

Paper No. II-A-1—"Recent Ad- vances in Computer Graphics in the Shipyard Industry" by J.

SYNOPSIS: Computer-aided manufacturing (CAM) in ship- building started with the intro- duction of N/C flame-cutting equipment around 1960. Links between design, manufacturing and administrative computer functions are still few. Turnkey drafting systems now in use com- plement the CAM systems to some extent but faired lines from a CAM system cannot be trans- ferred into a drafting system.

Also, the detail design drawings generated by a drafting system cannot be used for automatic parts generation. This paper dis- cusses the computer software used by the shipbuilding indus- try and areas in which work needs to be done to improve com- puter usage.

Paper No. II-B-1—"Recent Ad- vances in Computer-Based Ship- board Maintenance and Opera- tions Management Systems" by

SYNOPSIS: This paper describes the development and installation of a shipboard computer system aboard a Great Lakes freighter, which performs maintenance and inventory control functions as well as crew payroll. System de- sign criteria, program operation, and system implementation are discussed in addition to com- ments on crew acceptance.

Paper No. II-A-2—"Recent Ad- vances in Ship Producibility Re- search" by J. DeMartini.

Program, (1) the National Ship- building Standards Program (NSRP), and (2) the Shipbuild- ing Industrial Engineering Pro- gram are highlighted. As part of the National Shipbuilding Re- search Program, these two pro- grams, organized under the