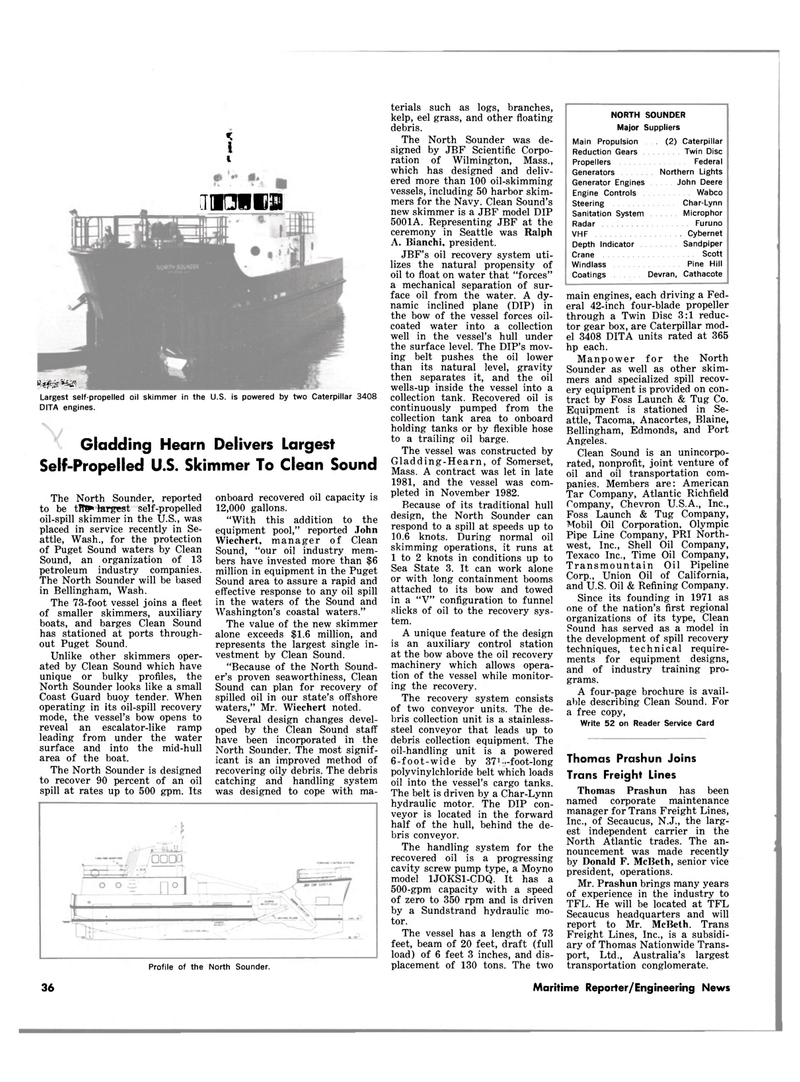 Largest self-propelled oil skimmer in the U.S. is powered by two Caterpillar 3408

The North Sounder, reported to be tB8* largest self-propelled oil-spill skimmer in the U.S., was placed in service recently in Se- attle, Wash., for the protection of Puget Sound waters by Clean

The North Sounder will be based in Bellingham, Wash.

The 73-foot vessel joins a fleet of smaller skimmers, auxiliary boats, and barges Clean Sound has stationed at ports through- out Puget Sound.

Unlike other skimmers oper- ated by Clean Sound which have unique or bulky profiles, the

Coast Guard buoy tender. When operating in its oil-spill recovery mode, the vessel's bow opens to reveal an escalator-like ramp leading from under the water surface and into the mid-hull area of the boat.

The North Sounder is designed to recover 90 percent of an oil spill at rates up to 500 gpm. Its onboard recovered oil capacity is 12,000 gallons. "With this addition to the equipment pool," reported John

Sound, "our oil industry mem- bers have invested more than $6 million in equipment in the Puget

The value of the new skimmer alone exceeds $1.6 million, and represents the largest single in- vestment by Clean Sound. "Because of the North Sound- er's proven seaworthiness, Clean

Sound can plan for recovery of spilled oil in our state's offshore waters," Mr. Wiechert noted.

North Sounder. The most signif- icant is an improved method of recovering oily debris. The debris catching and handling system was designed to cope with ma- terials such as logs, branches, kelp, eel grass, and other floating debris.

The North Sounder was de- signed by JBF Scientific Corpo- ration of Wilmington, Mass., which has designed and deliv- ered more than 100 oil-skimming vessels, including 50 harbor skim- mers for the Navy. Clean Sound's new skimmer is a JBF model DIP 5001A. Representing JBF at the ceremony in Seattle was Ralph

JBF's oil recovery system uti- lizes the natural propensity of oil to float on water that "forces" a mechanical separation of sur- face oil from the water. A dy- namic inclined plane (DIP) in the bow of the vessel forces oil- coated water into a collection well in the vessel's hull under the surface level. The DIP's mov- ing belt pushes the oil lower than its natural level, gravity then separates it, and the oil wells-up inside the vessel into a collection tank. Recovered oil is continuously pumped from the collection tank area to onboard holding tanks or by flexible hose to a trailing oil barge.

The vessel was constructed by

Because of its traditional hull design, the North Sounder can respond to a spill at speeds up to 10.6 knots. During normal oil skimming operations, it runs at 1 to 2 knots in conditions up to

Sea State 3. It can work alone or with long containment booms attached to its bow and towed in a "V" configuration to funnel slicks of oil to the recovery sys- tem.

A unique feature of the design is an auxiliary control station at the bow above the oil recovery machinery which allows opera- tion of the vessel while monitor- ing the recovery.

The recovery system consists of two conveyor units. The de- bris collection unit is a stainless- steel conveyor that leads up to debris collection equipment. The oil-handling unit is a powered 6-foot-wide by 371-.-foot-long polyvinylchloride belt which loads oil into the vessel's cargo tanks.

The belt is driven by a Char-Lynn hydraulic motor. The DIP con- veyor is located in the forward half of the hull, behind the de- bris conveyor.

The handling system for the recovered oil is a progressing cavity screw pump type, a Moyno model 1JOKS1-CDQ. It has a 500-gpm capacity with a speed of zero to 350 rpm and is driven by a Sundstrand hydraulic mo- tor.

Manpower for the North

Sounder as well as other skim- mers and specialized spill recov- ery equipment is provided on con- tract by Foss Launch & Tug Co.

Since its founding in 1971 as one of the nation's first regional organizations of its type, Clean

Sound has served as a model in the development of spill recovery techniques, technical require- ments for equipment designs, and of industry training pro- grams.

A four-page brochure is avail- able describing Clean Sound. For a free copy,

Inc., of Secaucus, N.J., the larg- est independent carrier in the

Mr. Prashun brings many years of experience in the industry to

TFL. He will be located at TFL

Secaucus headquarters and will report to Mr. McBeth. Trans