The new vessel will be certified under U.S Coast Guard Rules and Regulations for Small Passenger Vessels, Subchapter T. Delivery is scheduled for April 1984.

Two large dinner boats have also been ordered. Holiday Cruises of Norfolk, Va., has signed a contract for one of the New Spirit Class but of a new styling (see rendering). This vessel will be 145 feet long with a beam of 32 feet 4 inches and design draft of 6 feet.

This is the second dinner boat built by Blount Marine for Holiday Cruises; the first was the New Spirit delivered in May 1983.

The new Holiday vessel will carry up to 600 passengers for dinner cruises, on two completely enclosed decks and a third open deck. Main propulsion will be by two GM Detroit Diesel 8V-71N engines; electric power will be provided by two 75-kw generators.

Delivery is expected in April 1984.

A similar dinner cruise vessel has been ordered by World Yacht Enterprises, Ltd. of New York.

This vessel will be a sister ship of the Holiday Cruises boat, with delivery also scheduled for April 1984. These two dinner boats will be the ninth and tenth constructed by the Blount yard. Vessels of this type are in operation on the East Coast, Gulf of Mexico, Mississippi River, and Great Lakes.

Blount Marine Corporation hopes the new modern styling of these dinner cruise vessels will increase public acceptance of this form of dining-cruising. 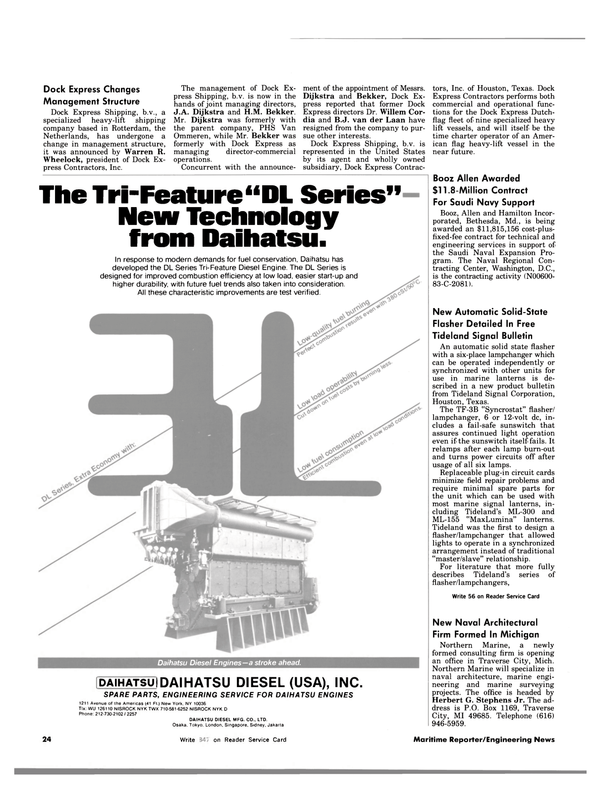