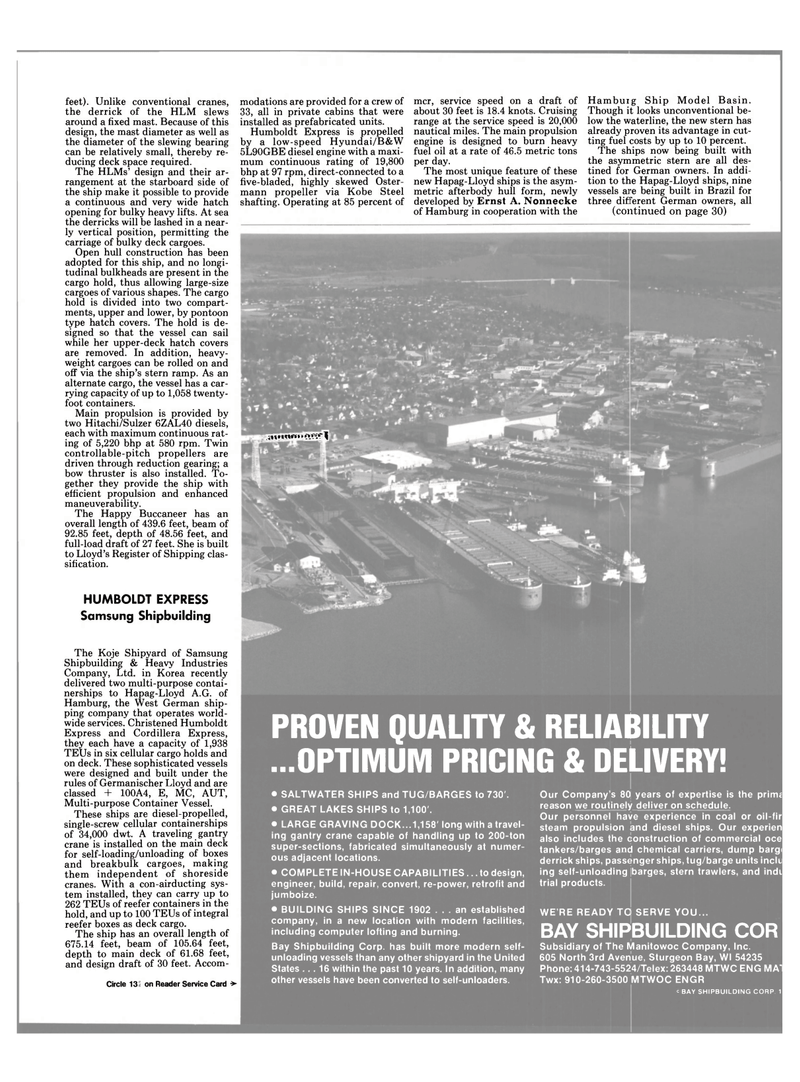 feet). Unlike conventional cranes, the derrick of the HLM slews around a fixed mast. Because of this design, the mast diameter as well as the diameter of the slewing bearing can be relatively small, thereby re- ducing deck space required.

The HLMs' design and their ar- rangement at the starboard side of the ship make it possible to provide a continuous and very wide hatch opening for bulky heavy lifts. At sea the derricks will be lashed in a near- ly vertical position, permitting the carriage of bulky deck cargoes.

Open hull construction has been adopted for this ship, and no longi- tudinal bulkheads are present in the cargo hold, thus allowing large-size cargoes of various shapes. The cargo hold is divided into two compart- ments, upper and lower, by pontoon type hatch covers. The hold is de- signed so that the vessel can sail while her upper-deck hatch covers are removed. In addition, heavy- weight cargoes can be rolled on and off via the ship's stern ramp. As an alternate cargo, the vessel has a car- rying capacity of up to 1,058 twenty- foot containers.

Main propulsion is provided by two Hitachi/Sulzer 6ZAL40 diesels, each with maximum continuous rat- ing of 5,220 bhp at 580 rpm. Twin controllable-pitch propellers are driven through reduction gearing; a bow thruster is also installed. To- gether they provide the ship with efficient propulsion and enhanced maneuverability.

The Happy Buccaneer has an overall length of 439.6 feet, beam of 92.85 feet, depth of 48.56 feet, and full-load draft of 27 feet. She is built to Lloyd's Register of Shipping clas- sification. modations are provided for a crew of 33, all in private cabins that were installed as prefabricated units.

Humboldt Express is propelled by a low-speed Hyundai/B&W 5L90GBE diesel engine with a maxi- mum continuous rating of 19,800 bhp at 97 rpm, direct-connected to a five-bladed, highly skewed Oster- mann propeller via Kobe Steel shafting. Operating at 85 percent of mcr, service speed on a draft of about 30 feet is 18.4 knots. Cruising range at the service speed is 20,000 nautical miles. The main propulsion engine is designed to burn heavy fuel oil at a rate of 46.5 metric tons per day.

The most unique feature of these new Hapag-Lloyd ships is the asym- metric afterbody hull form, newly developed by Ernst A. Nonnecke of Hamburg in cooperation with the

Though it looks unconventional be- low the waterline, the new stern has already proven its advantage in cut- ting fuel costs by up to 10 percent.

The ships now being built with the asymmetric stern are all des- tined for German owners. In addi- tion to the Hapag-Lloyd ships, nine vessels are being built in Brazil for three different German owners, all (continued on page 30)

Bay Shipbuilding Corp. has built more modern self- unloading vessels than any other shipyard in the United

States ... 16 within the past 10 years. In addition, many other vessels have been converted to self-unloaders.

Our Company's 80 years of expertise is the prim* reason we routinely deliver on schedule.

WE'RE READY TO SERVE YOU...

The Koje Shipyard of Samsung

Express and Cordillera Express, they each have a capacity of 1,938

TEUs in six cellular cargo holds and on deck. These sophisticated vessels were designed and built under the rules of Germanischer Lloyd and are classed + 100A4, E, MC, AUT,

These ships are diesel-propelled, single-screw cellular containerships of 34,000 dwt. A traveling gantry crane is installed on the main deck for self-loading/unloading of boxes and breakbulk cargoes, making them independent of shoreside cranes. With a con-airducting sys- tem installed, they can carry up to 262 TEUs of reefer containers in the hold, and up to 100 TEUs of integral reefer boxes as deck cargo.