Since her keel was laid on December 15, 1988, construction of a 12,830-dwt roll-on/roll-off vessel ordered by United Baltic Corp. has been in full swing to meet the delivery due for November this year at Hyundai Heavy Industries (HHI) Ulsan shipyard.

When delivered, the vessel will transport containers, roll trailers, paper reels and other Ro/Ro cargoes between U.K. east coast ports and various European countries on the Baltic shores.

The vessel will have three cargo decks including tank top, and one shelter deck to be used for loading of empty containers by shore crane.

She is capable of carrying up to 781 TEUs.

For efficient cargo loading/unloading, one set of stern door/ramp will be provided. The ramp has an anti-slip surface of fish-bone type and is operated hydraulically and electrically from the vertical position up to approximately 8 degrees below the horizontal position.

The vessel is powered by two nonreversible, four-stroke turbocharged Wartsila engines, developing a total MCR output of 13,575 kw at 900 rpm. The 9R46 engine provides 8,145 kw of this total, and the remaining 5,430 kw is by the 6R346 engine.

Classified by Lloyd's Register of Shipping +100A1, roll-on/roll-off ship and +LMC, UMS, Ice Class IAS, she will have an overall length of about 151 feet, breadth of 82 feet, depth to upper deck of 57 feet, and design draft of 23.6 feet.

Since its shipyard operation in 1973, HHI has so far delivered a total of 14 Ro/Ro ships to their respective owners including Barber Blue Sea Lines (BBS), which took delivery of their identical 2,400- TEU Super Carriers in early 1984. 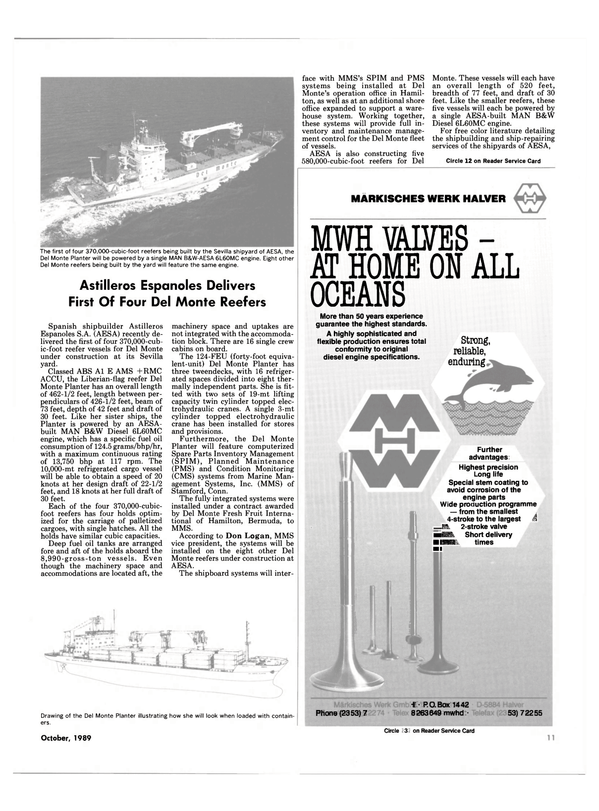