Wartsila Diesel's Vasa 32 engine type has set a new record. With an 18-engine contract from the Odense Steel Shipyard of Denmark for a new container feeder vessel series, the number of Vasa 32s ordered now exceeds 1,000. This is, according to the company, more than for any other medium speed engine in the same output range.

The new order includes auxiliary engines for the six container feeder vessels ordered by A.P. Moller, one of the leading shipping companies in the world. Each vessel will have three four-cylinder Vasa 32 auxiliary engines, each with an output of 1,320 kw at 720 rpm.

Since its introduction in 1978, the Vasa 32 has become one of the most popular diesel engines in its output range. The Vasa 32 was the first medium speed diesel engine designed and developed exclusively for operation on cheap low-quality heavy fuels. With the Vasa 32 it became possible to burn the same heavy fuel in both the vessel's main and auxiliary engines—a concept that offered entirely new potential for savings in fuel costs.

The Vasa 32 is widely used both as a main and auxiliary engine in a great variety of ships, and also for power generation in offshore drilling rigs and land-based power plants. 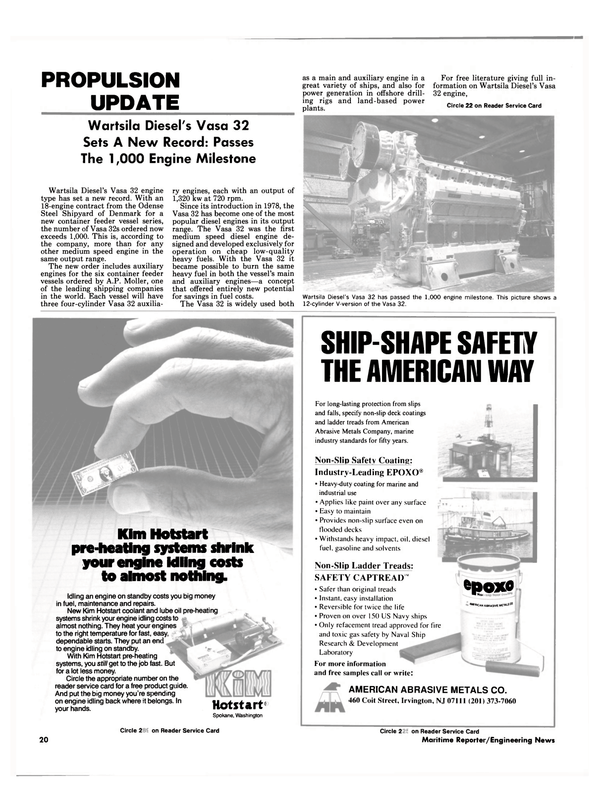