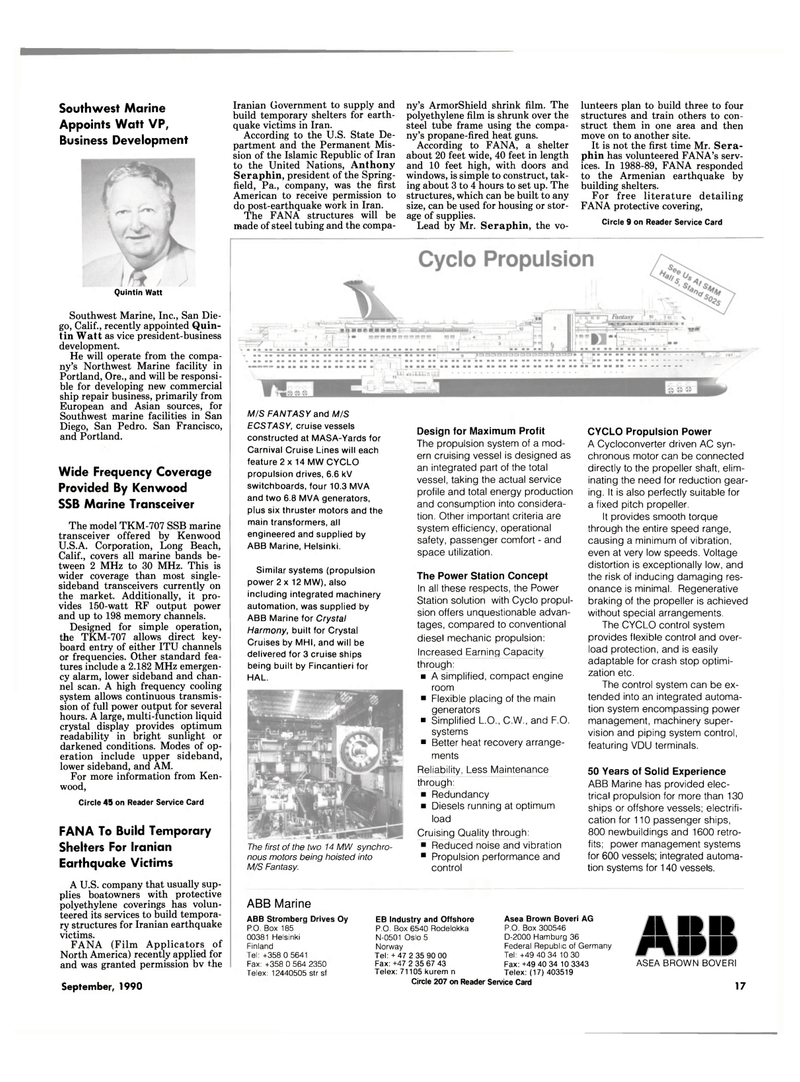 He will operate from the compa- ny's Northwest Marine facility in

Portland, Ore., and will be responsi- ble for developing new commercial ship repair business, primarily from

European and Asian sources, for

Calif., covers all marine bands be- tween 2 MHz to 30 MHz. This is wider coverage than most single- sideband transceivers currently on the market. Additionally, it pro- vides 150-watt RF output power and up to 198 memory channels.

For more information from Ken- wood,

North America) recently applied for and was granted permission bv the

According to the U.S. State De- partment and the Permanent Mis- sion of the Islamic Republic of Iran to the United Nations, Anthony

Seraphin, president of the Spring- field, Pa., company, was the first

American to receive permission to do post-earthquake work in Iran.

Cruises by MHI, and will be delivered for 3 cruise ships being built by Fincantieri for

According to FANA, a shelter about 20 feet wide, 40 feet in length and 10 feet high, with doors and windows, is simple to construct, tak- ing about 3 to 4 hours to set up. The structures, which can be built to any size, can be used for housing or stor- age of supplies.

Lead by Mr. Seraphin, the vo-

The propulsion system of a mod- ern cruising vessel is designed as an integrated part of the total vessel, taking the actual service profile and total energy production and consumption into considera- tion. Other important criteria are system efficiency, operational safety, passenger comfort - and space utilization.

In all these respects, the Power

Cruising Quality through: • Reduced noise and vibration • Propulsion performance and control lunteers plan to build three to four structures and train others to con- struct them in one area and then move on to another site.

It is not the first time Mr. Sera- phin has volunteered FANA's serv- ices. In 1988-89, FANA responded to the Armenian earthquake by building shelters.

A Cycloconverter driven AC syn- chronous motor can be connected directly to the propeller shaft, elim- inating the need for reduction gear- ing. It is also perfectly suitable for a fixed pitch propeller.

It provides smooth torque through the entire speed range, causing a minimum of vibration, even at very low speeds. Voltage distortion is exceptionally low, and the risk of inducing damaging res- onance is minimal. Regenerative braking of the propeller is achieved without special arrangements.