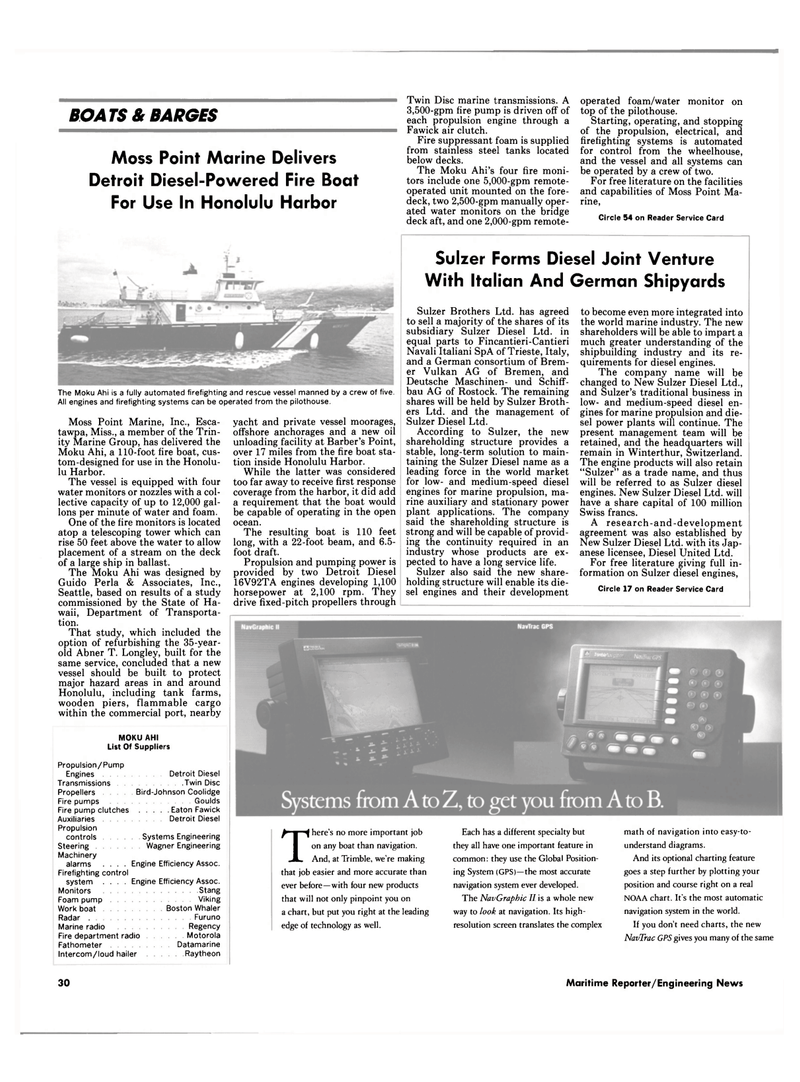 For Use In Honolulu Harbor

Twin Disc marine transmissions. A 3,500-gpm fire pump is driven off of each propulsion engine through a

Starting, operating, and stopping of the propulsion, electrical, and firefighting systems is automated for control from the wheelhouse, and the vessel and all systems can be operated by a crew of two.

For free literature on the facilities and capabilities of Moss Point Ma- rine,

With Italian And German Shipyards

Sulzer Brothers Ltd. has agreed to sell a majority of the shares of its subsidiary Sulzer Diesel Ltd. in equal parts to Fincantieri-Cantieri

Navali Italiani SpA of Trieste, Italy, and a German consortium of Brem- er Vulkan AG of Bremen, and

Deutsche Maschinen- und Schiff- bau AG of Rostock. The remaining shares will be held by Sulzer Broth- ers Ltd. and the management of

According to Sulzer, the new shareholding structure provides a stable, long-term solution to main- taining the Sulzer Diesel name as a leading force in the world market for low- and medium-speed diesel engines for marine propulsion, ma- rine auxiliary and stationary power plant applications. The company said the shareholding structure is strong and will be capable of provid- ing the continuity required in an industry whose products are ex- pected to have a long service life.

Sulzer also said the new share- holding structure will enable its die- sel engines and their development to become even more integrated into the world marine industry. The new shareholders will be able to impart a much greater understanding of the shipbuilding industry and its re- quirements for diesel engines.

The company name will be changed to New Sulzer Diesel Ltd., and Sulzer's traditional business in low- and medium-speed diesel en- gines for marine propulsion and die- sel power plants will continue. The present management team will be retained, and the headquarters will remain in Winterthur, Switzerland.

The engine products will also retain "Sulzer" as a trade name, and thus will be referred to as Sulzer diesel engines. New Sulzer Diesel Ltd. will have a share capital of 100 million

A research-and-development agreement was also established by

The Moku Ahi is a fully automated firefighting and rescue vessel manned by a crew of five.

All engines and firefighting systems can be operated from the pilothouse.

Moku Ahi, a 110-foot fire boat, cus- tom-designed for use in the Honolu- lu Harbor.

The vessel is equipped with four water monitors or nozzles with a col- lective capacity of up to 12,000 gal- lons per minute of water and foam.

One of the fire monitors is located atop a telescoping tower which can rise 50 feet above the water to allow placement of a stream on the deck of a large ship in ballast.

The Moku Ahi was designed by

Seattle, based on results of a study commissioned by the State of Ha- waii, Department of Transporta- tion.

That study, which included the option of refurbishing the 35-year- old Abner T. Longley, built for the same service, concluded that a new vessel should be built to protect major hazard areas in and around

Honolulu, including tank farms, wooden piers, flammable cargo within the commercial port, nearby

There's no more important job on any boat than navigation. And, at Trimble, we're making that job easier and more accurate than ever before—with four new products that will not only pinpoint you on a chart, but put you right at the leading edge of technology as well.

Each has a different specialty but they all have one important feature in common: they use the Global Position- ing System (GPS)—the most accurate navigation system ever developed.

The NavGraphic II is a whole new way to look at navigation. Its high- resolution screen translates the complex math of navigation into easy-to- understand diagrams.

NOAA chart. It's the most automatic navigation system in the world.

If you don't need charts, the new

NavTrac GPS gives you many of the same yacht and private vessel moorages, offshore anchorages and a new oil unloading facility at Barber's Point, over 17 miles from the fire boat sta- tion inside Honolulu Harbor.

While the latter was considered too far away to receive first response coverage from the harbor, it did add a requirement that the boat would be capable of operating in the open ocean.