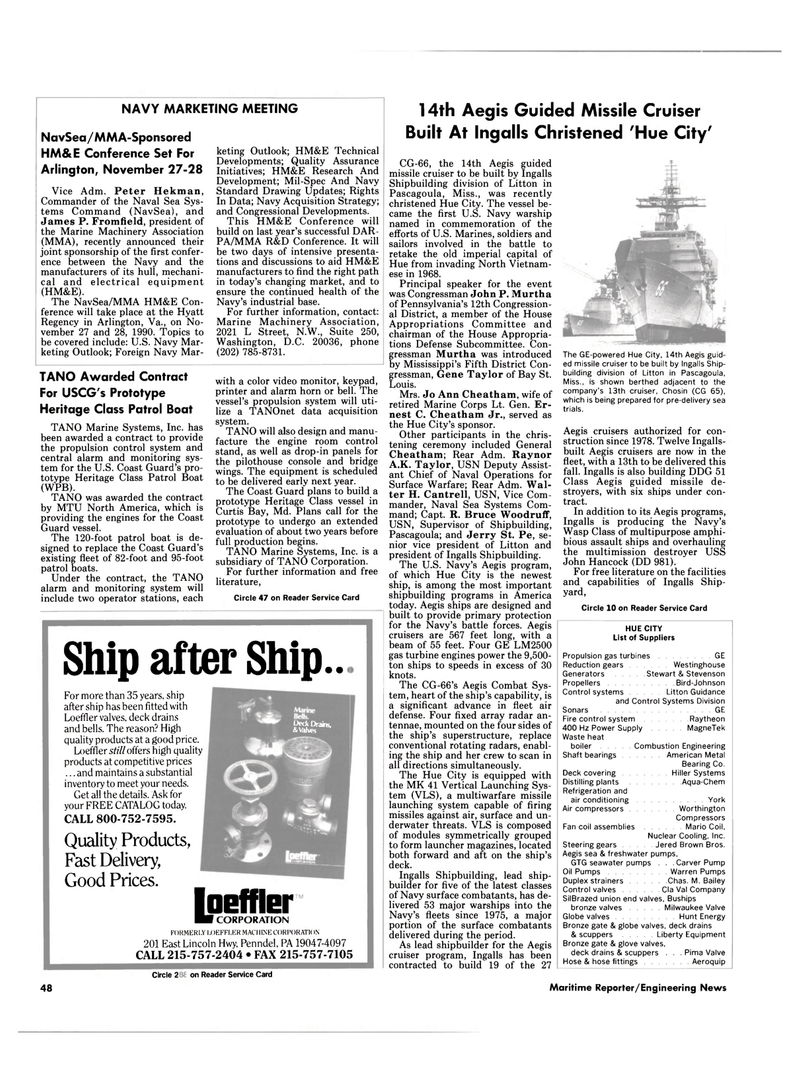 Commander of the Naval Sea Sys- tems Command (NavSea), and

James P. Fromfield, president of the Marine Machinery Association (MMA), recently announced their joint sponsorship of the first confer- ence between the Navy and the manufacturers of its hull, mechani- cal and electrical equipment (HM&E).

This HM&E Conference will build on last year's successful DAR-

PA/MMA R&D Conference. It will be two days of intensive presenta- tions and discussions to aid HM&E manufacturers to find the right path in today's changing market, and to ensure the continued health of the

TANO was awarded the contract by MTU North America, which is providing the engines for the Coast

Under the contract, the TANO alarm and monitoring system will include two operator stations, each with a color video monitor, keypad, printer and alarm horn or bell. The vessel's propulsion system will uti- lize a TANOnet data acquisition system.

TANO will also design and manu- facture the engine room control stand, as well as drop-in panels for the pilothouse console and bridge wings. The equipment is scheduled to be delivered early next year.

Curtis Bay, Md. Plans call for the prototype to undergo an extended evaluation of about two years before full production begins.

TANO Marine Systems, Inc. is a subsidiary of TANO Corporation.

For further information and free literature,

For more than 35 years, ship after ship has been fitted with

Get all the details. Ask for your FREE CATALOG today.

CG-66, the 14th Aegis guided missile cruiser to be built by Ingalls

Shipbuilding division of Litton in

Pascagoula, Miss., was recently christened Hue City. The vessel be- came the first U.S. Navy warship named in commemoration of the efforts of U.S. Marines, soldiers and sailors involved in the battle to retake the old imperial capital of

Principal speaker for the event was Congressman John P. Murtha of Pennsylvania's 12th Congression- al District, a member of the House

Other participants in the chris- tening ceremony included General

The U.S. Navy's Aegis program, of which Hue City is the newest ship, is among the most important shipbuilding programs in America today. Aegis ships are designed and built to provide primary protection for the Navy's battle forces. Aegis cruisers are 567 feet long, with a beam of 55 feet. Four GE LM2500 gas turbine engines power the 9,500- ton ships to speeds in excess of 30 knots.

The CG-66's Aegis Combat Sys- tem, heart of the ship's capability, is a significant advance in fleet air defense. Four fixed array radar an- tennae, mounted on the four sides of the ship's superstructure, replace conventional rotating radars, enabl- ing the ship and her crew to scan in all directions simultaneously.

The Hue City is equipped with the MK 41 Vertical Launching Sys- tem (VLS), a multiwarfare missile launching system capable of firing missiles against air, surface and un- derwater threats. VLS is composed of modules symmetrically grouped to form launcher magazines, located both forward and aft on the ship's deck.

Ingalls Shipbuilding, lead ship- builder for five of the latest classes of Navy surface combatants, has de- livered 53 major warships into the

Navy's fleets since 1975, a major portion of the surface combatants delivered during the period.

As lead shipbuilder for the Aegis cruiser program, Ingalls has been contracted to build 19 of the 27

Miss., is shown berthed adjacent to the company's 13th cruiser, Chosin (CG 65), which is being prepared for pre-delivery sea trials.

Aegis cruisers authorized for con- struction since 1978. Twelve Ingalls- built Aegis cruisers are now in the fleet, with a 13th to be delivered this fall. Ingalls is also building DDG 51

In addition to its Aegis programs,

Ingalls is producing the Navy's

For free literature on the facilities and capabilities of Ingalls Ship- yard,