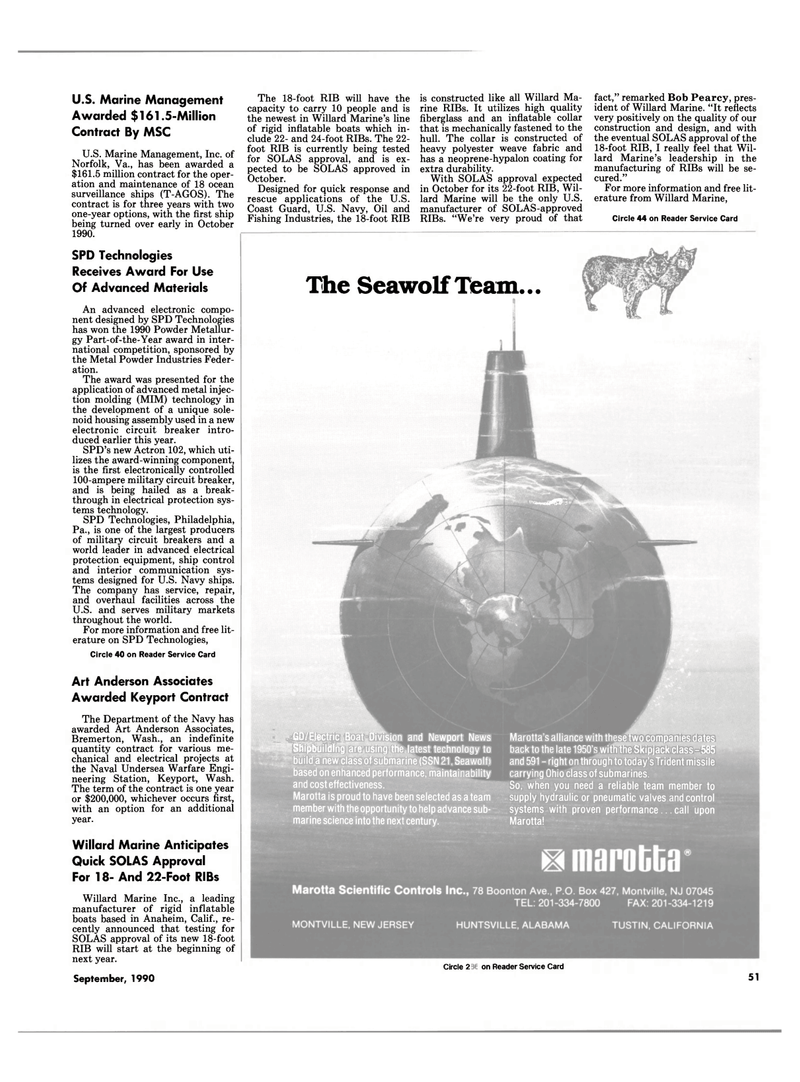 Norfolk, Va., has been awarded a $161.5 million contract for the oper- ation and maintenance of 18 ocean surveillance ships (T-AGOS). The contract is for three years with two one-year options, with the first ship being turned over early in October 1990.

Receives Award For Use

The award was presented for the application of advanced metal injec- tion molding (MIM) technology in the development of a unique sole- noid housing assembly used in a new electronic circuit breaker intro- duced earlier this year.

SPD's new Actron 102, which uti- lizes the award-winning component, is the first electronically controlled 100-ampere military circuit breaker, and is being hailed as a break- through in electrical protection sys- tems technology.

Pa., is one of the largest producers of military circuit breakers and a world leader in advanced electrical protection equipment, ship control and interior communication sys- tems designed for U.S. Navy ships.

The company has service, repair, and overhaul facilities across the

U.S. and serves military markets throughout the world.

For more information and free lit- erature on SPD Technologies,

The Department of the Navy has awarded Art Anderson Associates,

The term of the contract is one year or $200,000, whichever occurs first, with an option for an additional year.

Willard Marine Inc., a leading manufacturer of rigid inflatable boats based in Anaheim, Calif., re- cently announced that testing for

SOLAS approval of its new 18-foot

RIB will start at the beginning of next year.

The 18-foot RIB will have the capacity to carry 10 people and is the newest in Willard Marine's line of rigid inflatable boats which in- clude 22- and 24-foot RIBs. The 22- foot RIB is currently being tested for SOLAS approval, and is ex- pected to be SOLAS approved in

Designed for quick response and rescue applications of the U.S.

Fishing Industries, the 18-foot RIB is constructed like all Willard Ma- rine RIBs. It utilizes high quality fiberglass and an inflatable collar that is mechanically fastened to the hull. The collar is constructed of heavy polyester weave fabric and has a neoprene-hypalon coating for extra durability.

With SOLAS approval expected in October for its 22-foot RIB, Wil- lard Marine will be the only U.S. manufacturer of SOLAS-approved

RIBs. "We're very proud of that fact," remarked Bob Pearcy, pres- ident of Willard Marine. "It reflects very positively on the quality of our construction and design, and with the eventual SOLAS approval of the 18-foot RIB, I really feel that Wil- lard Marine's leadership in the manufacturing of RIBs will be se- cured."

For more information and free lit- erature from Willard Marine,

Shipbuilding are using the latest technology to build a new class of submarine (SSN 21. Seawolf) based on enhanced performance, maintainability and cost effectiveness.

Marotta is proud to have been selected as a team member with the opportu nity to help advance sub- marine science into the next century.

Marotta's alliance with these two companies dates! back to the late 1950 s with the Skipjack class - 585 and 591 - right on through to today's Trident missile carrying Ohio class of submarines.

So, when you need a reliable team member to supply hydraulic or pneumatic valves and control systems with proven performance... call upon