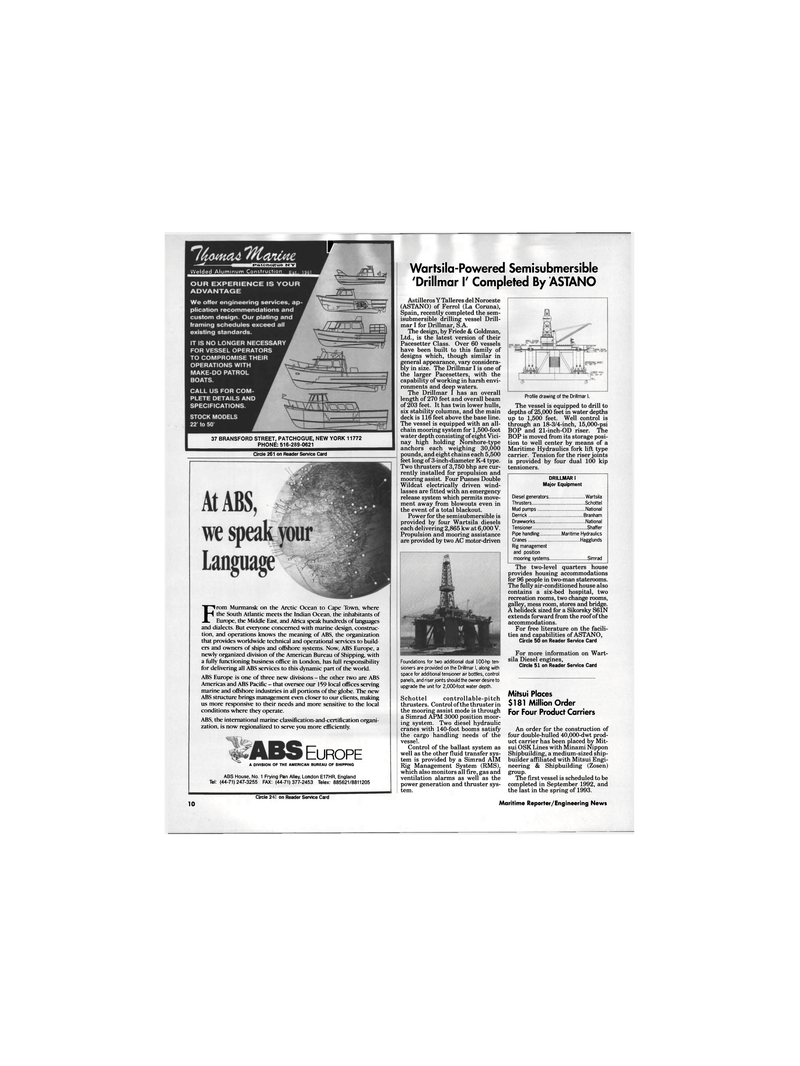 From Murmansk on the Arctic Ocean to Cape Town, where the South Atlantic meets the Indian Ocean, the inhabitants of Europe, the Middle East, and Africa speak hundreds of languages and dialects. But everyone concerned with marine design, construc- tion, and operations knows the meaning of ABS, the organization that provides worldwide technical and operational services to build- ers and owners of ships and offshore systems. Now, ABS Europe, a newly organized division of the American Bureau of Shipping, with a fully functioning business office in London, has full responsibility for delivering all ABS services to this dynamic part of the world.

Americas and ABS Pacific - that oversee our 159 local offices serving marine and offshore industries in all portions of the globe. The new

ABS structure brings management even closer to our clients, making us more responsive to their needs and more sensitive to the local conditions where they operate.

A DIVISION OF THE AMERICAN BUREAU OF SHIPPING

The design, by Friede & Goldman,

Ltd., is the latest version of their

Pacesetter Class. Over 60 vessels have been built to this family of designs which, though similar in general appearance, vary considera- bly in size. The Drillmar I is one of the larger Pacesetters, with the capability of working in harsh envi- ronments and deep waters.

The Drillmar I has an overall length of 270 feet and overall beam of 203 feet. It has twin lower hulls, six stability columns, and the main deck is 116 feet above the base line.

The vessel is equipped with an all- chain mooring system for 1,500-foot water depth consisting of eight Vici- nay high holding Norshore-type anchors each weighing 30,000 pounds, and eight chains each 5,500 feet long of 3-inch-diameter K-4 type.

Wildcat electrically driven wind- lasses are fitted with an emergency release system which permits move- ment away from blowouts even in the event of a total blackout.

Power for the semisubmersible is provided by four Wartsila diesels each delivering 2,865 kw at 6,000 V.

Propulsion and mooring assistance are provided by two AC motor-driven

Foundations for two additional dual 100-hp ten- sioners are provided on the Drillmar I, along with space for additional tensioner air bottles, control panels, and riser joints should the owner desire to upgrade the unit for 2,000-foot water depth.

Schottel controllable-pitch thrusters. Control of the thruster in the mooring assist mode is through a Simrad APM 3000 position moor- ing system. Two diesel hydraulic cranes with 140-foot booms satisfy the cargo handling needs of the vessel.

Rig Management System (RMS), which also monitors all fire, gas and ventilation alarms as well as the power generation and thruster sys- tem.

Profile drawing of the Drillmar I.

A helideck sized for a Sikorsky S61N extends forward from the roof of the accommodations.

For free literature on the facili- ties and capabilities of ASTANO,

An order for the construction of four double-hulled 40,000-dwt prod- uct carrier has been placed by Mit- sui OSK Lines with Minami Nippon

The first vessel is scheduled to be completed in September 1992, and the last in the spring of 1993.