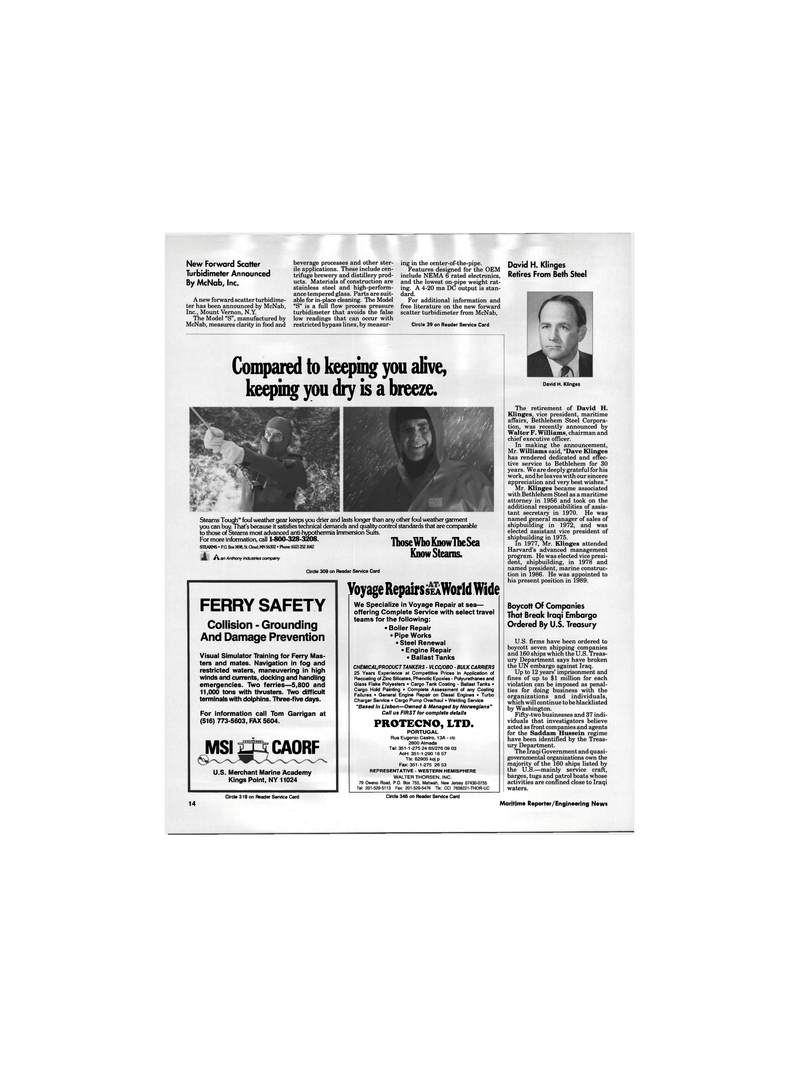 A new forward scatter turbidime- ter has been announced by McNab,

The Model "S", manufactured by

McNab, measures clarity in food and beverage processes and other ster- ile applications. These include cen- trifuge brewery and distillery prod- ucts. Materials of construction are stainless steel and high-perform- ance tempered glass. Parts are suit- able for in-place cleaning. The Model "S" is a full flow process pressure turbidimeter that avoids the false low readings that can occur with restricted bypass lines, by measur- ing in the center-of-the-pipe.

Features designed for the OEM include NEMA 6 rated electronics, and the lowest on-pipe weight rat- ing. A 4-20 ma DC output is stan- dard.

For additional information and free literature on the new forward scatter turbidimeter from McNab,

The retirement of David H.

In making the announcement,

Mr. Williams said, "Dave Klinges has rendered dedicated and effec- tive service to Bethlehem for 30 years. We are deeply grateful for his work, and he leaves with our sincere appreciation and very best wishes."

Harvard's advanced management program. He was elected vice presi- dent, shipbuilding, in 1978 and named president, marine construc- tion in 1986. He was appointed to his present position in 1989.

U.S. firms have been ordered to boycott seven shipping companies and 160 ships which the U.S. Treas- ury Department says have broken the UN embargo against Iraq.

Up to 12 years' imprisonment and fines of up to $1 million for each violation can be imposed as penal- ties for doing business with the organizations and individuals, which will continue to be blacklisted by Washington.

Fifty-two businesses and 37 indi- viduals that investigators believe acted as front companies and agents for the Saddam Hussein regime have been identified by the Treas- ury Department.

The Iraqi Government and quasi- governmental organizations own the majority of the 160 ships listed by the U.S.—mainly service craft, barges, tugs and patrol boats whose activities are confined close to Iraqi waters.

Stearns Tough™ foul weather gear keeps you drier and lasts longer than any other foul weather garment you can buy. That's because it satisfies technical demands and quality control standards that are comparable to those of Stearns most advanced anti-hypothermia Immersion Suits.

Call us FIRST for complete details