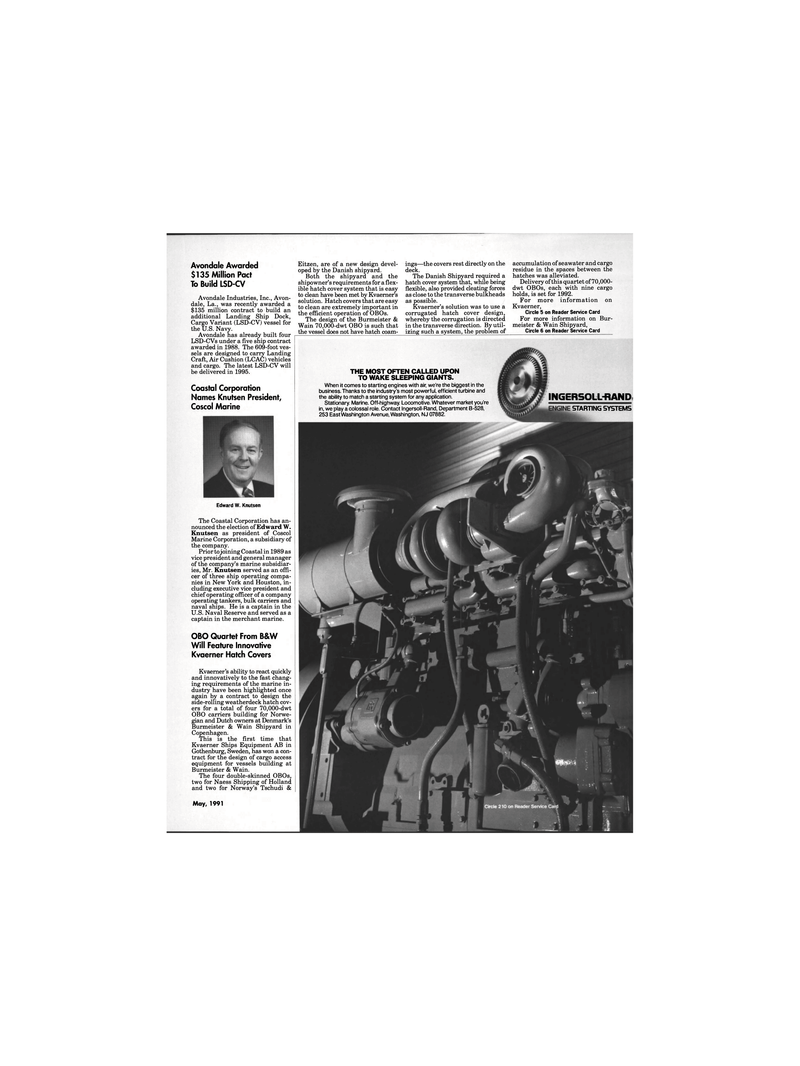 The Coastal Corporation has an- nounced the election of Edward W.

Knutsen as president of Coscol

Marine Corporation, a subsidiary of the company.

Prior to joining Coastal in 1989 as vice president and general manager of the company's marine subsidiar- ies, Mr. Knutsen served as an offi- cer of three ship operating compa- nies in New York and Houston, in- cluding executive vice president and chief operating officer of a company operating tankers, bulk carriers and naval ships. He is a captain in the

U.S. Naval Reserve and served as a captain in the merchant marine.

Kvaerner's ability to react quickly and innovatively to the fast chang- ing requirements of the marine in- dustry have been highlighted once again by a contract to design the side-rolling weatherdeck hatch cov- ers for a total of four 70,000-dwt

This is the first time that

Gothenburg, Sweden, has won a con- tract for the design of cargo access equipment for vessels building at

The four double-skinned OBOs, two for Naess Shipping of Holland and two for Norway's Tschudi &

LSD-CVs under a five ship contract awarded in 1988. The 609-foot ves- sels are designed to carry Landing

Craft, Air Cushion (LCAC) vehicles and cargo. The latest LSD-CV will be delivered in 1995. accumulation of seawater and cargo residue in the spaces between the hatches was alleviated.

For more information on

When it comes to starting engines with air, we're the biggest in the business. Thanks to the industry's most powerful, efficient turbine and the ability to match a starting system for any application.

Eitzen, are of a new design devel- oped by the Danish shipyard.

Both the shipyard and the shipowner's requirements for a flex- ible hatch cover system that is easy to clean have been met by Kvaerner's solution. Hatch covers that are easy to clean are extremely important in the efficient operation of OBOs.

The design of the Burmeister &

Wain 70,000-dwt OBO is such that the vessel does not have hatch coam- ings—the covers rest directly on the deck.

The Danish Shipyard required a hatch cover system that, while being flexible, also provided cleating forces as close to the transverse bulkheads as possible.

Kvaerner's solution was to use a corrugated hatch cover design, whereby the corrugation is directed in the transverse direction. By util- izing such a system, the problem of

THE MOST OFTEN CALLED UPON