Italian prowess in the field of passenger vessel design, outfitting and technology is near legendary status in the international marine community. Even as the grip on these high-value, niche vessels loosens — largely due to cost-cutting competition from the Far East — a quick peak a the world orderbook and recent deliveries of cruise ships quickly tells who currently reigns supreme in the cruise shipping market.

Evidence of Italian influence in the passenger vessel segment is undeniable, and over the years the country's shipbuilders have catered to some of the world's most discerning and quality demanding customers, such as U.S.- based Disney Cruise Line.

A recent delivery, which espouses the expertise of the Italian ship construction community was delivered this spring from Fincantieri's Venice-Marghera shipyard. Built for Holland American Line of the Carnival Corp., Zaandam is a 61,000-ton ship, which measures 780 x 115 ft. (238 x 35 m) and can cruise at up to 23 knots. The luxury ship is in stark contrast toward the trend of "bigger is better," (which, by the way, Fincantieri has helped to foster and delivered ably with its construction of such mega-ships as Grand Princess) and embodies the shipowner's desire to redevelop and renew the tradition of excellence, which has been the hallmark of the Holland America Line, one of the world's oldest lines specializing in passenger transport.

Zaandam's 720 cabins are designed to afford maximum luxury and space for its 1,824 passengers, and every detail of the ship — from its technologically advanced marine products and systems to its interior materials and artistic accents — were chosen with purpose.

Zaandam is the seventh vessel built by Fincantieri for HAL, and this ship is the third to carry the name for the company, with the first ship debuting in 1882 and the second in 1939. Fincantieri will also deliver another five ships for the line over the next few years. Among these to be built is Amsterdam, a sistership to Rotterdam, which will feature the Azipod propulsion system. The other four in the program are a new class of 84,000-ton Panamax vessels.

Headquartered in Trieste. Fincantieri is separated into three business units: the Merchant Ship Business Unit, the Naval Vessel Business Unit and the Cruise Ship Business Unit. The company offers seven shipyards strategically positioned throughout Italy, as well as two of the largest and most renowned centers for ship design in Genoa and Trieste.

Volcan de Tauro (pictured) is the latest incarnation of the company's popular and proven Aquastrada class, and was delivered to her owner Armas Ocean Jet in the spring.

The 374 ft. (114 m) steel construction monohull exhibited a maximum speed of 45 knots and a service speed of 40 knots at 90 percent MCR and a full load at sea trials. The former and latter were made possible through Rodriquez' own SMS stabilization system installed, a Seaworthiness Management System, whir1- ' "omprised of four lateral fins and iwo i-roils.

The Aquastrada TMV 114 is the 220th vessel delivered by the specialty yard since 1956, when the first commercial high speed vessel was launched. Currently, the yard is building 32 patrol boats capable of 40 knots for the Italian Coast Guard, and scheduled for delivery over the next two years. 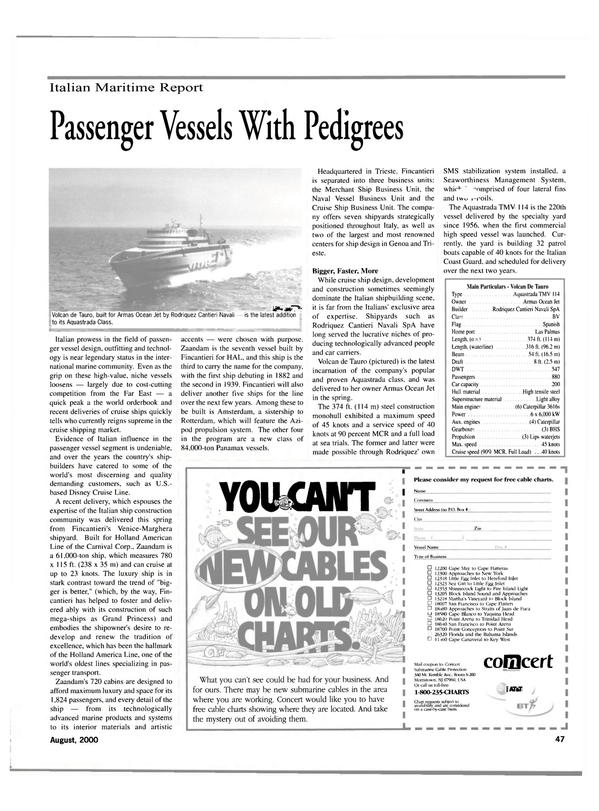