Rep. Don Young (R-Ark.) has taken over the helm of the House Transportation & Infrastructure Committee, after chairing the Resources Committee for the past six years. In one of his first acts as Chairman, on January 31, 2001, Chairman Young announced the new subcommittee Chairmen for the Transportation & Infrastructure (T&I) Committee for the 107th Congress. Chairman Young also set an ambitious agenda for the T&I Committee.

Whether the reauthorization of TEA- 21 — not scheduled until 2003 — will include further funds form maritime programs such as former Secretary of Transportation Rodney Slater's ambitious Marine Transportation System of the Americas remains to be seen.

C.) as the Ranking Member.

Maritime jurisdiction in Commerce is divided between Senator Olympia Snowe's (R-Maine) Subcommittee on Oceans and Fisheries, (which includes Coast Guard jurisdiction), and Sen.

USCG To Explore Deeper Waters The Coast Guard is urging Congress to find an estimated $9 billion for its new Deepwater Capability Replacement Project. According to the Coast Guard's 21st Century Preview (January 2001), the Coast Guard plans to award a contract to one of three competing teams in January 2002 to begin "cutting steel" for the delivery of the new deepwater assets to replace its aging cutters, aircraft, and communications systems. For FY 2002, the Coast Guard is looking for $350- $500 million to initiate the Deepwater Project. The T&I Committee has jurisdiction to authorize such a Project, but only the Appropriations Committees can provide actual dollars. Where to find this money at a time of tight budgets remains an open question. 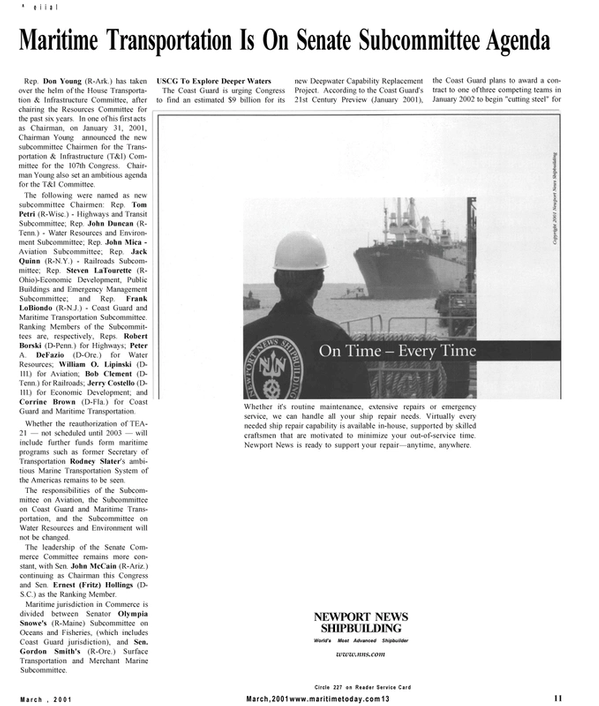