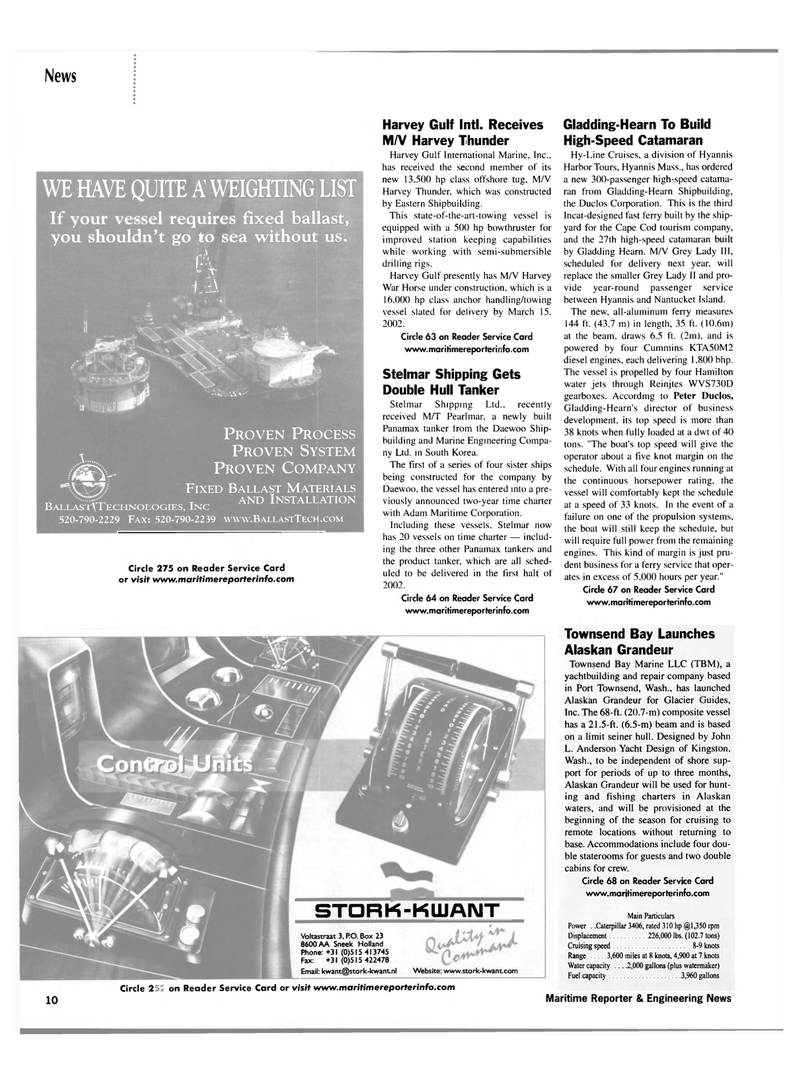 Harvey Thunder, which was constructed ran from Gladding-Hearn Shipbuilding, by Eastern Shipbuilding. the Duclos Corporation. This is the third

This state-of-the-art-towing vessel is Incat-designed fast ferry built by the ship- equipped with a 500 hp bowthruster for yard for the Cape Cod tourism company, improved station keeping capabilities and the 27th high-speed catamaran built while working with semi-submersible by Gladding Hearn. M/V Grey Lady III, drilling rigs. scheduled for delivery next year, will

Panamax tanker from the Daewoo Ship- 38 knots whgn fully ,oaded at a dwt of 40 building and Marine Engineering Compa- (ons -The boa,,s top speed win give the ny Ltd. 111 South Korea. operator about a five knot margin on the

The first of a series of four sister ships scheduie. with all four engines running at being constructed for the company by ,he continuous horsepower rating, the

Daewoo, the vessel has entered into a pre- vesse, wi„ comfortab|y kept the schedule viously announced two-year time charter at a speed of 33 knots ,n the eyent of a with Adam Maritime Corporation. failure on one of the propuision systems,

Including these vessels. Stelmar now the boa, wi„ sti„ keep the schedule, but has 20 vessels on time charter — includ- wi„ require fu„ power from the remaining ing the three other Panamax tankers and engines This kind of margin is just pru_

Circle 275 on Reader Service Card ^ ^^ ^ a'> sched" dent business for a ferry service that oper- or visit www.maritimereporterinfo.com t0 be dellVered ln the hrSt halt ot ates in excess of 5,000 hours per year."

Wash., to be independent of shore sup- port for periods of up to three months,

Alaskan Grandeur will be used for hunt- ing and fishing charters in Alaskan waters, and will be provisioned at the beginning of the season for cruising to remote locations without returning to base. Accommodations include four dou- ble staterooms for guests and two double cabins for crew.