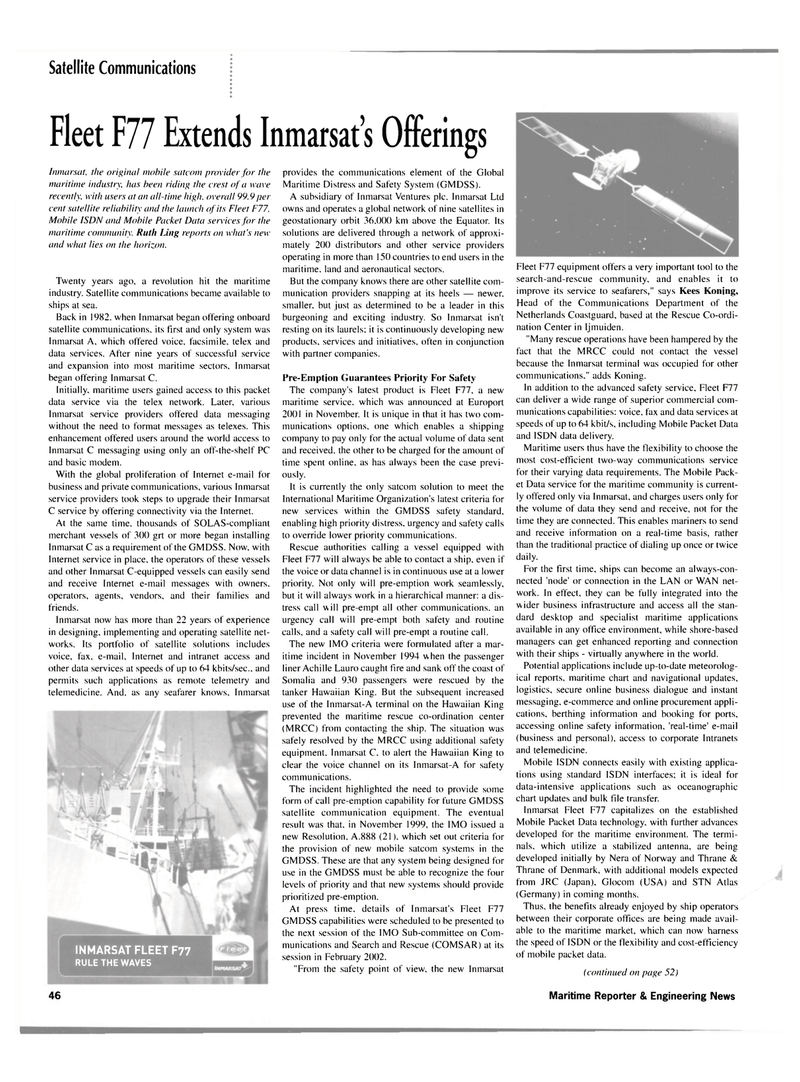 Inmarsat, the original mobile satcom provider for the maritime industry, has been riding the crest of a wave recently, with users at an all-time high, overall 99.9 per cent satellite reliability and the launch of its Fleet F77,

Mobile ISDN and Mobile Packet Data services for the maritime community. Ruth Ling reports on what's new and what lies on the horizon.

Back in 1982. when Inmarsat began offering onboard satellite communications, its first and only system was

Inmarsat service providers offered data messaging without the need to format messages as telexes. This enhancement offered users around the world access to

With the global proliferation of Internet e-mail for business and private communications, various Inmarsat service providers took steps to upgrade their Inmarsat

C service by offering connectivity via the Internet.

At the same time, thousands of SOLAS-compliant merchant vessels of 300 grt or more began installing

Inmarsat C as a requirement of the GMDSS. Now. with

Internet service in place, the operators of these vessels and other Inmarsat C-equipped vessels can easily send and receive Internet e-mail messages with owners, operators, agents, vendors, and their families and friends.

Inmarsat now has more than 22 years of experience in designing, implementing and operating satellite net- works. Its portfolio of satellite solutions includes voice, fax, e-mail. Internet and intranet access and other data services at speeds of up to 64 kbits/sec., and permits such applications as remote telemetry and telemedicine. And. as any seafarer knows, Inmarsat provides the communications element of the Global

A subsidiary of Inmarsat Ventures pic. Inmarsat Ltd owns and operates a global network of nine satellites in geostationary orbit 36.000 km above the Equator. Its solutions are delivered through a network of approxi- mately 200 distributors and other service providers operating in more than 150 countries to end users in the maritime, land and aeronautical sectors.

But the company knows there are other satellite com- munication providers snapping at its heels — newer, smaller, but just as determined to be a leader in this burgeoning and exciting industry. So Inmarsat isn't resting on its laurels: it is continuously developing new products, services and initiatives, often in conjunction with partner companies.

The company's latest product is Fleet F77. a new maritime service, which was announced at Europort 2001 in November. It is unique in that it has two com- munications options, one which enables a shipping company to pay only for the actual volume of data sent and received, the other to be charged for the amount of time spent online, as has always been the case previ- ously.

It is currently the only satcom solution to meet the

Somalia and 930 passengers were rescued by the tanker Hawaiian King. But the subsequent increased use of the Inmarsat-A terminal on the Hawaiian King prevented the maritime rescue co-ordination center (MRCC) from contacting the ship. The situation was safely resolved by the MRCC using additional safety equipment. Inmarsat C, to alert the Hawaiian King to clear the voice channel on its Inmarsat-A for safety communications.

The incident highlighted the need to provide some form of call pre-emption capability for future GMDSS satellite communication equipment. The eventual result was that, in November 1999, the IMO issued a new Resolution, A.888 (21). which set out criteria for the provision of new mobile satcom systems in the

GMDSS. These are that any system being designed for use in the GMDSS must be able to recognize the four levels of priority and that new systems should provide prioritized pre-emption.

GMDSS capabilities were scheduled to be presented to the next session of the IMO Sub-committee on Com- munications and Search and Rescue (COMSAR) at its session in February 2002. "From the safety point of view, the new Inmarsat

Fleet F77 equipment offers a very important tool to the search-and-rescue community, and enables it to improve its service to seafarers," says Kees Koning,

Head of the Communications Department of the

Netherlands Coastguard, based at the Rescue Co-ordi- nation Center in Ijmuiden. "Many rescue operations have been hampered by the fact that the MRCC could not contact the vessel because the Inmarsat terminal was occupied for other communications," adds Koning.

In addition to the advanced safety service. Fleet F77 can deliver a wide range of superior commercial com- munications capabilities: voice, fax and data services at speeds of up to 64 kbit/s. including Mobile Packet Data and ISDN data delivery.

Maritime users thus have the flexibility to choose the most cost-efficient two-way communications service for their varying data requirements. The Mobile Pack- et Data service for the maritime community is current- ly offered only via Inmarsat, and charges users only for the volume of data they send and receive, not for the time they are connected. This enables mariners to send and receive information on a real-time basis, rather than the traditional practice of dialing up once or twice daily.

For the first time, ships can become an always-con- nected 'node' or connection in the LAN or WAN net- work. In effect, they can be fully integrated into the wider business infrastructure and access all the stan- dard desktop and specialist maritime applications available in any office environment, while shore-based managers can get enhanced reporting and connection with their ships - virtually anywhere in the world.

Mobile Packet Data technology, with further advances developed for the maritime environment. The termi- nals, which utilize a stabilized antenna, are being developed initially by Nera of Norway and Thrane &

Thus, the benefits already enjoyed by ship operators between their corporate offices are being made avail- able to the maritime market, which can now harness the speed of ISDN or the flexibility and cost-efficiency of mobile packet data. (continued on page 52) 46 Maritime Reporter & Engineering News