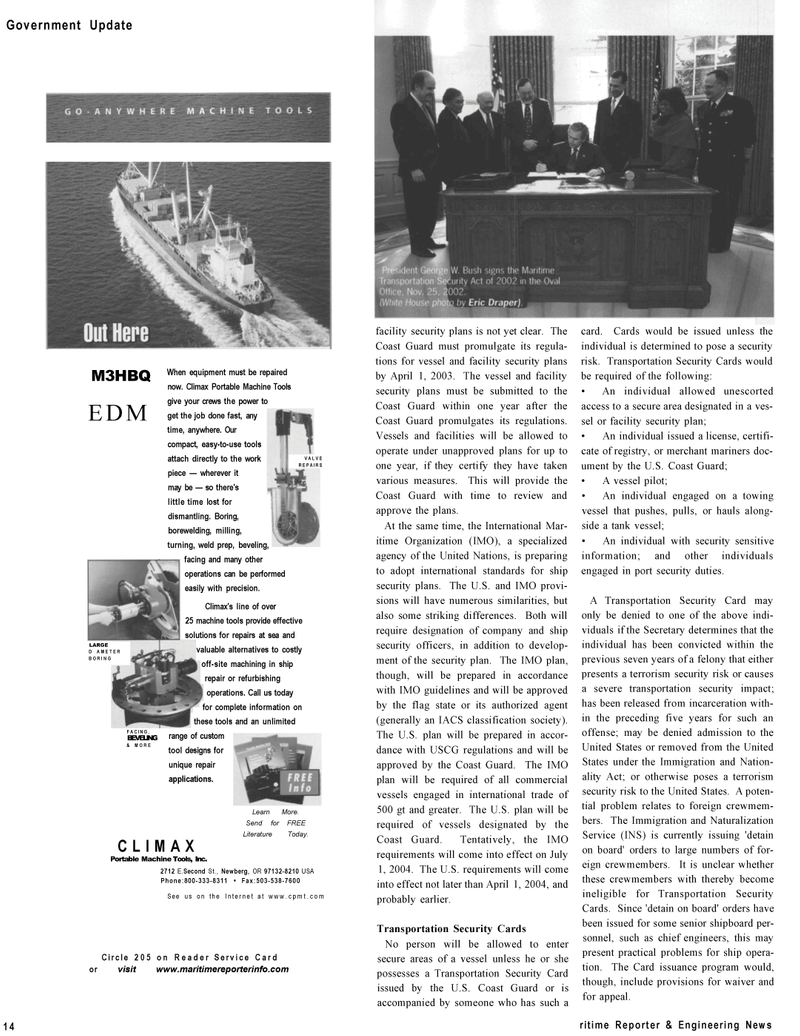 See us on the Internet at www.cpmt.com

When equipment must be repaired now. Climax Portable Machine Tools give your crews the power to get the job done fast, any time, anywhere. Our compact, easy-to-use tools attach directly to the work piece — wherever it may be — so there's little time lost for dismantling. Boring, borewelding, milling, turning, weld prep, beveling, facing and many other operations can be performed easily with precision.

Climax's line of over 25 machine tools provide effective solutions for repairs at sea and valuable alternatives to costly off-site machining in ship repair or refurbishing operations. Call us today for complete information on these tools and an unlimited range of custom tool designs for unique repair applications.

Circle 205 on Reader Service Card or visit www.maritimereporterinfo.com 14 facility security plans is not yet clear. The

Coast Guard within one year after the

Vessels and facilities will be allowed to operate under unapproved plans for up to one year, if they certify they have taken various measures. This will provide the

Coast Guard with time to review and approve the plans.

At the same time, the International Mar- itime Organization (IMO), a specialized agency of the United Nations, is preparing to adopt international standards for ship security plans. The U.S. and IMO provi- sions will have numerous similarities, but also some striking differences. Both will require designation of company and ship security officers, in addition to develop- ment of the security plan. The IMO plan, though, will be prepared in accordance with IMO guidelines and will be approved by the flag state or its authorized agent (generally an IACS classification society).

No person will be allowed to enter secure areas of a vessel unless he or she possesses a Transportation Security Card issued by the U.S. Coast Guard or is accompanied by someone who has such a card. Cards would be issued unless the individual is determined to pose a security risk. Transportation Security Cards would be required of the following: • An individual allowed unescorted access to a secure area designated in a ves- sel or facility security plan; • An individual issued a license, certifi- cate of registry, or merchant mariners doc- ument by the U.S. Coast Guard; • A vessel pilot; • An individual engaged on a towing vessel that pushes, pulls, or hauls along- side a tank vessel; • An individual with security sensitive information; and other individuals engaged in port security duties.

A Transportation Security Card may only be denied to one of the above indi- viduals if the Secretary determines that the individual has been convicted within the previous seven years of a felony that either presents a terrorism security risk or causes a severe transportation security impact; has been released from incarceration with- in the preceding five years for such an offense; may be denied admission to the

United States or removed from the United

Service (INS) is currently issuing 'detain on board' orders to large numbers of for- eign crewmembers. It is unclear whether these crewmembers with thereby become ineligible for Transportation Security

Cards. Since 'detain on board' orders have been issued for some senior shipboard per- sonnel, such as chief engineers, this may present practical problems for ship opera- tion. The Card issuance program would, though, include provisions for waiver and for appeal. ritime Reporter & Engineering News