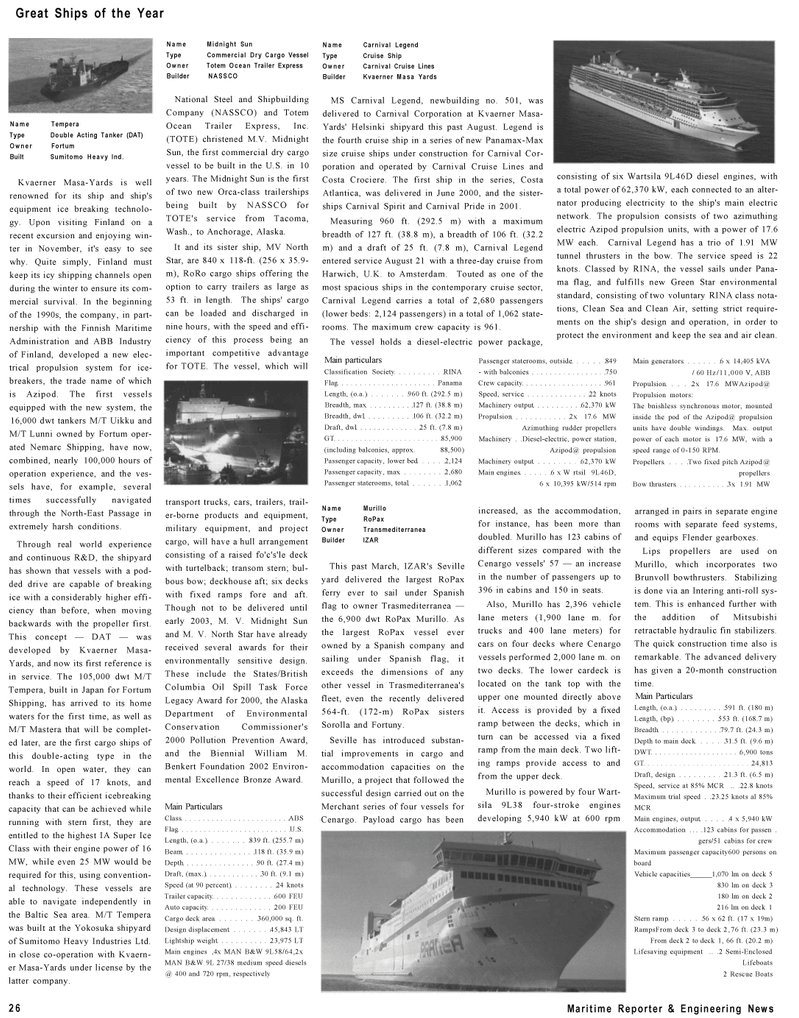 Great Ships of the Year

MS Carnival Legend, newbuilding no. 501, was delivered to Carnival Corporation at Kvaerner Masa-

Yards' Helsinki shipyard this past August. Legend is the fourth cruise ship in a series of new Panamax-Max size cruise ships under construction for Carnival Cor- poration and operated by Carnival Cruise Lines and

Costa Crociere. The first ship in the series, Costa

Atlantica, was delivered in June 2000, and the sister- ships Carnival Spirit and Carnival Pride in 2001.

Harwich, U.K. to Amsterdam. Touted as one of the most spacious ships in the contemporary cruise sector,

The vessel holds a diesel-electric power package, consisting of six Wartsila 9L46D diesel engines, with a total power of 62,370 kW, each connected to an alter- nator producing electricity to the ship's main electric network. The propulsion consists of two azimuthing electric Azipod propulsion units, with a power of 17.6

MW each. Carnival Legend has a trio of 1.91 MW tunnel thrusters in the bow. The service speed is 22 knots. Classed by RINA, the vessel sails under Pana- ma flag, and fulfills new Green Star environmental standard, consisting of two voluntary RINA class nota- tions, Clean Sea and Clean Air, setting strict require- ments on the ship's design and operation, in order to protect the environment and keep the sea and air clean.

Kvaerner Masa-Yards is well renowned for its ship and ship's equipment ice breaking technolo- gy. Upon visiting Finland on a recent excursion and enjoying win- ter in November, it's easy to see why. Quite simply, Finland must keep its icy shipping channels open during the winter to ensure its com- mercial survival. In the beginning of the 1990s, the company, in part- nership with the Finnish Maritime

Administration and ABB Industry of Finland, developed a new elec- trical propulsion system for ice- breakers, the trade name of which is Azipod. The first vessels equipped with the new system, the 16,000 dwt tankers M/T Uikku and

Through real world experience and continuous R&D, the shipyard has shown that vessels with a pod- ded drive are capable of breaking ice with a considerably higher effi- ciency than before, when moving backwards with the propeller first.

This concept — DAT — was developed by Kvaerner Masa-

Tempera, built in Japan for Fortum

Shipping, has arrived to its home waters for the first time, as well as

M/T Mastera that will be complet- ed later, are the first cargo ships of this double-acting type in the world. In open water, they can reach a speed of 17 knots, and thanks to their efficient icebreaking capacity that can be achieved while running with stern first, they are entitled to the highest IA Super Ice

Class with their engine power of 16

MW, while even 25 MW would be required for this, using convention- al technology. These vessels are able to navigate independently in the Baltic Sea area. M/T Tempera was built at the Yokosuka shipyard of Sumitomo Heavy Industries Ltd. in close co-operation with Kvaern- er Masa-Yards under license by the latter company.

Sun, the first commercial dry cargo vessel to be built in the U.S. in 10 years. The Midnight Sun is the first of two new Orca-class trailerships being built by NASSCO for

It and its sister ship, MV North

Star, are 840 x 118-ft. (256 x 35.9- m), RoRo cargo ships offering the option to carry trailers as large as 53 ft. in length. The ships' cargo can be loaded and discharged in nine hours, with the speed and effi- ciency of this process being an important competitive advantage for TOTE. The vessel, which will transport trucks, cars, trailers, trail- er-borne products and equipment, military equipment, and project cargo, will have a hull arrangement consisting of a raised fo'c's'le deck with turtelback; transom stern; bul- bous bow; deckhouse aft; six decks with fixed ramps fore and aft.

Though not to be delivered until early 2003, M. V. Midnight Sun and M. V. North Star have already received several awards for their environmentally sensitive design.

This past March, IZAR's Seville yard delivered the largest RoPax ferry ever to sail under Spanish flag to owner Trasmediterranea — the 6,900 dwt RoPax Murillo. As the largest RoPax vessel ever owned by a Spanish company and sailing under Spanish flag, it exceeds the dimensions of any other vessel in Trasmediterranea's fleet, even the recently delivered 564-ft. (172-m) RoPax sisters

Murillo, a project that followed the successful design carried out on the

Merchant series of four vessels for

Cenargo. Payload cargo has been

Passenger staterooms, outside 849 - with balconies 750

Main engines 6 x W rtsil 9L46D, 6 x 10,395 kW/514 rpm increased, as the accommodation, for instance, has been more than doubled. Murillo has 123 cabins of different sizes compared with the

Also, Murillo has 2,396 vehicle lane meters (1,900 lane m. for trucks and 400 lane meters) for cars on four decks where Cenargo vessels performed 2,000 lane m. on two decks. The lower cardeck is located on the tank top with the upper one mounted directly above it. Access is provided by a fixed ramp between the decks, which in turn can be accessed via a fixed ramp from the main deck. Two lift- ing ramps provide access to and from the upper deck.

The bnishless synchronous motor, mounted inside the pod of the Azipod@ propulsion units have double windings. Max. output power of each motor is 17.6 MW, with a speed range of 0-150 RPM.

Lips propellers are used on

Brunvoll bowthrusters. Stabilizing is done via an Intering anti-roll sys- tem. This is enhanced further with the addition of Mitsubishi retractable hydraulic fin stabilizers.

Maximum passenger capacity600 persons on board