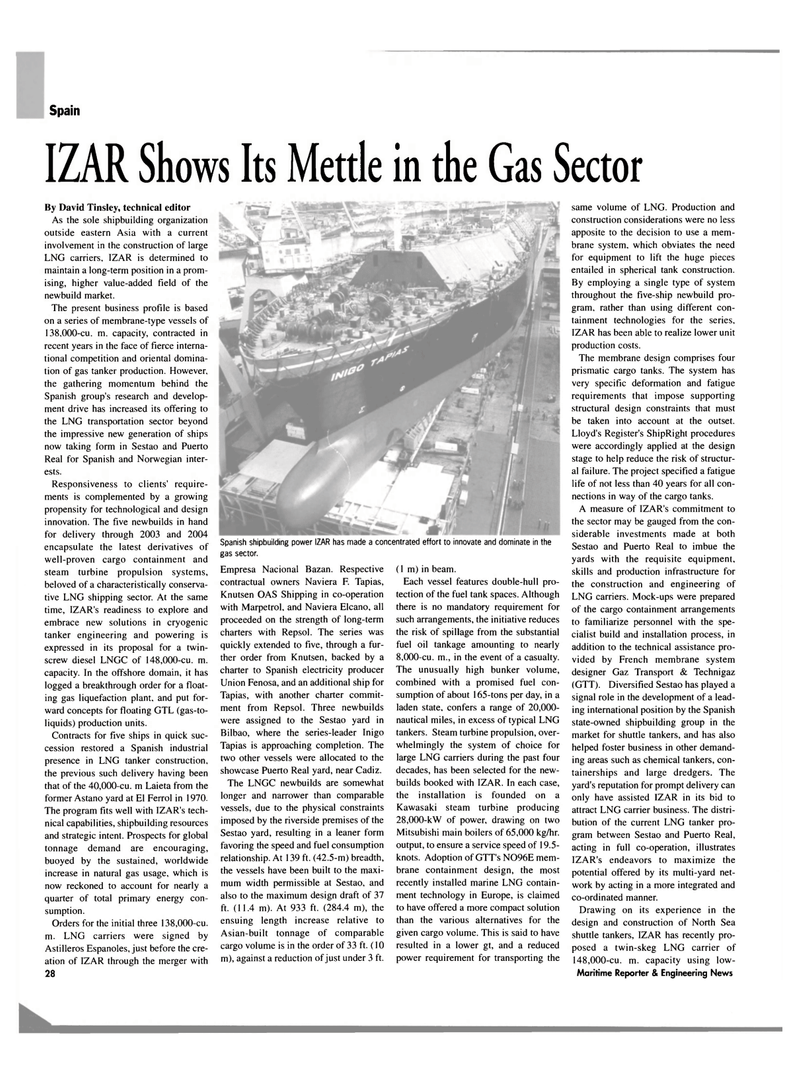 IZAR Shows Its Mettle in the Gas Sector

LNG carriers, IZAR is determined to maintain a long-term position in a prom- ising, higher value-added field of the newbuild market.

The present business profile is based on a series of membrane-type vessels of 138,000-cu. m. capacity, contracted in recent years in the face of fierce interna- tional competition and oriental domina- tion of gas tanker production. However, the gathering momentum behind the

Responsiveness to clients' require- ments is complemented by a growing propensity for technological and design innovation. The five newbuilds in hand for delivery through 2003 and 2004 encapsulate the latest derivatives of well-proven cargo containment and steam turbine propulsion systems, beloved of a characteristically conserva- tive LNG shipping sector. At the same time, IZAR's readiness to explore and embrace new solutions in cryogenic tanker engineering and powering is expressed in its proposal for a twin- screw diesel LNGC of 148,000-cu. m. capacity. In the offshore domain, it has logged a breakthrough order for a float- ing gas liquefaction plant, and put for- ward concepts for floating GTL (gas-to- liquids) production units.

Contracts for five ships in quick suc- cession restored a Spanish industrial presence in LNG tanker construction, the previous such delivery having been that of the 40,000-cu. m Laieta from the former Astano yard at El Ferrol in 1970.

Orders for the initial three 138,000-cu. m. LNG carriers were signed by

Astilleros Espanoles, just before the cre- ation of IZAR through the merger with 28

Spanish shipbuilding power IZAR has made a concentrated effort to innovate and dominate in the gas sector.

Knutsen OAS Shipping in co-operation with Marpetrol, and Naviera Elcano, all proceeded on the strength of long-term charters with Repsol. The series was quickly extended to five, through a fur- ther order from Knutsen, backed by a charter to Spanish electricity producer

Union Fenosa, and an additional ship for

Tapias, with another charter commit- ment from Repsol. Three newbuilds were assigned to the Sestao yard in

Bilbao, where the series-leader Inigo

Tapias is approaching completion. The two other vessels were allocated to the showcase Puerto Real yard, near Cadiz.

The LNGC newbuilds are somewhat longer and narrower than comparable vessels, due to the physical constraints imposed by the riverside premises of the

Sestao yard, resulting in a leaner form favoring the speed and fuel consumption relationship. At 139 ft. (42.5-m) breadth, the vessels have been built to the maxi- mum width permissible at Sestao, and also to the maximum design draft of 37 ft. (11.4 m). At 933 ft. (284.4 m), the ensuing length increase relative to

Each vessel features double-hull pro- tection of the fuel tank spaces. Although there is no mandatory requirement for such arrangements, the initiative reduces the risk of spillage from the substantial fuel oil tankage amounting to nearly 8,000-cu. m., in the event of a casualty.

The unusually high bunker volume, combined with a promised fuel con- sumption of about 165-tons per day, in a laden state, confers a range of 20,000- nautical miles, in excess of typical LNG tankers. Steam turbine propulsion, over- whelmingly the system of choice for large LNG carriers during the past four decades, has been selected for the new- builds booked with IZAR. In each case, the installation is founded on a

Mitsubishi main boilers of 65,000 kg/hr. output, to ensure a service speed of 19.5- knots. Adoption of GTT's N096E mem- brane containment design, the most recently installed marine LNG contain- ment technology in Europe, is claimed to have offered a more compact solution than the various alternatives for the given cargo volume. This is said to have resulted in a lower gt, and a reduced power requirement for transporting the same volume of LNG. Production and construction considerations were no less apposite to the decision to use a mem- brane system, which obviates the need for equipment to lift the huge pieces entailed in spherical tank construction.

By employing a single type of system throughout the five-ship newbuild pro- gram, rather than using different con- tainment technologies for the series,

IZAR has been able to realize lower unit production costs.

The membrane design comprises four prismatic cargo tanks. The system has very specific deformation and fatigue requirements that impose supporting structural design constraints that must be taken into account at the outset.

Lloyd's Register's ShipRight procedures were accordingly applied at the design stage to help reduce the risk of structur- al failure. The project specified a fatigue life of not less than 40 years for all con- nections in way of the cargo tanks.

Sestao and Puerto Real to imbue the yards with the requisite equipment, skills and production infrastructure for the construction and engineering of

LNG carriers. Mock-ups were prepared of the cargo containment arrangements to familiarize personnel with the spe- cialist build and installation process, in addition to the technical assistance pro- vided by French membrane system designer Gaz Transport & Technigaz (GTT). Diversified Sestao has played a signal role in the development of a lead- ing international position by the Spanish state-owned shipbuilding group in the market for shuttle tankers, and has also helped foster business in other demand- ing areas such as chemical tankers, con- tainerships and large dredgers. The yard's reputation for prompt delivery can only have assisted IZAR in its bid to attract LNG carrier business. The distri- bution of the current LNG tanker pro- gram between Sestao and Puerto Real, acting in full co-operation, illustrates

IZAR's endeavors to maximize the potential offered by its multi-yard net- work by acting in a more integrated and co-ordinated manner.

Drawing on its experience in the design and construction of North Sea shuttle tankers, IZAR has recently pro- posed a twin-skeg LNG carrier of 148,000-cu. m. capacity using low-