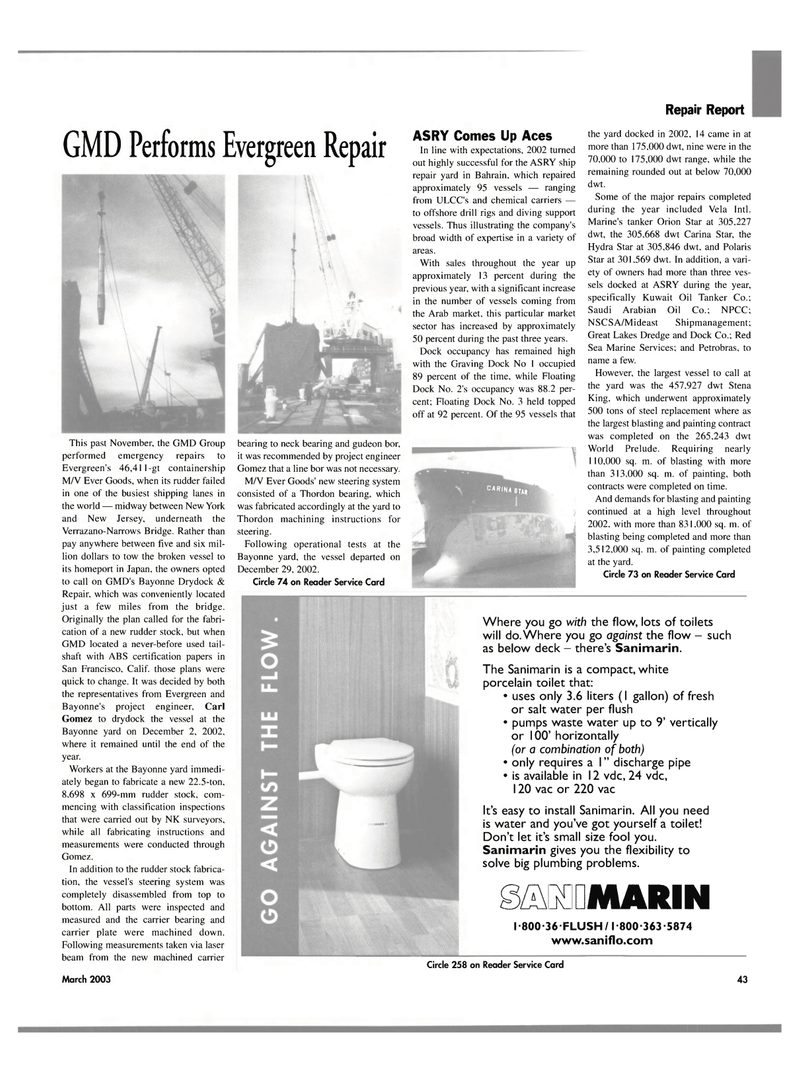 In line with expectations, 2002 turned out highly successful for the ASRY ship repair yard in Bahrain, which repaired approximately 95 vessels — ranging from ULCC's and chemical carriers — to offshore drill rigs and diving support vessels. Thus illustrating the company's broad width of expertise in a variety of areas.

Dock occupancy has remained high with the Graving Dock No 1 occupied 89 percent of the time, while Floating

Some of the major repairs completed during the year included Vela Intl.

Star at 301.569 dwt. In addition, a vari- ety of owners had more than three ves- sels docked at ASRY during the year, specifically Kuwait Oil Tanker Co.:

Sea Marine Services; and Petrobras, to name a few.

However, the largest vessel to call at the yard was the 457.927 dwt Stena

King, which underwent approximately 500 tons of steel replacement where as the largest blasting and painting contract was completed on the 265.243 dwt

Where you go with the flow, lots of toilets will do. Where you go against the flow - such as below deck - there's Sanimarin.

The Sanimarin is a compact, white porcelain toilet that: • uses only 3.6 liters (I gallon) of fresh or salt water per flush • pumps waste water up to 9' vertically or 100' horizontally (or a combination of both) • only requires a I" discharge pipe • is available in 12 vdc, 24 vdc, 120 vac or 220 vac

It's easy to install Sanimarin. All you need is water and you've got yourself a toilet!

This past November, the GMD Group performed emergency repairs to

M/V Ever Goods, when its rudder failed in one of the busiest shipping lanes in the world — midway between New York and New Jersey, underneath the

Verrazano-Narrows Bridge. Rather than pay anywhere between five and six mil- lion dollars to tow the broken vessel to its homeport in Japan, the owners opted to call on GMD's Bayonne Drydock &

Repair, which was conveniently located just a few miles from the bridge.

Originally the plan called for the fabri- cation of a new rudder stock, but when

San Francisco, Calif, those plans were quick to change. It was decided by both the representatives from Evergreen and

Gomez to drydock the vessel at the

Bayonne yard on December 2, 2002. where it remained until the end of the year.

Workers at the Bayonne yard immedi- ately began to fabricate a new 22.5-ton, 8.698 x 699-mm rudder stock, com- mencing with classification inspections that were carried out by NK surveyors, while all fabricating instructions and measurements were conducted through

In addition to the rudder stock fabrica- tion, the vessel's steering system was completely disassembled from top to bottom. All parts were inspected and measured and the carrier bearing and carrier plate were machined down.

Following measurements taken via laser beam from the new machined carrier bearing to neck bearing and gudeon bor, it was recommended by project engineer

Gomez that a line bor was not necessary.

M/V Ever Goods' new steering system consisted of a Thordon bearing, which was fabricated accordingly at the yard to

Following operational tests at the

Bayonne yard, the vessel departed on