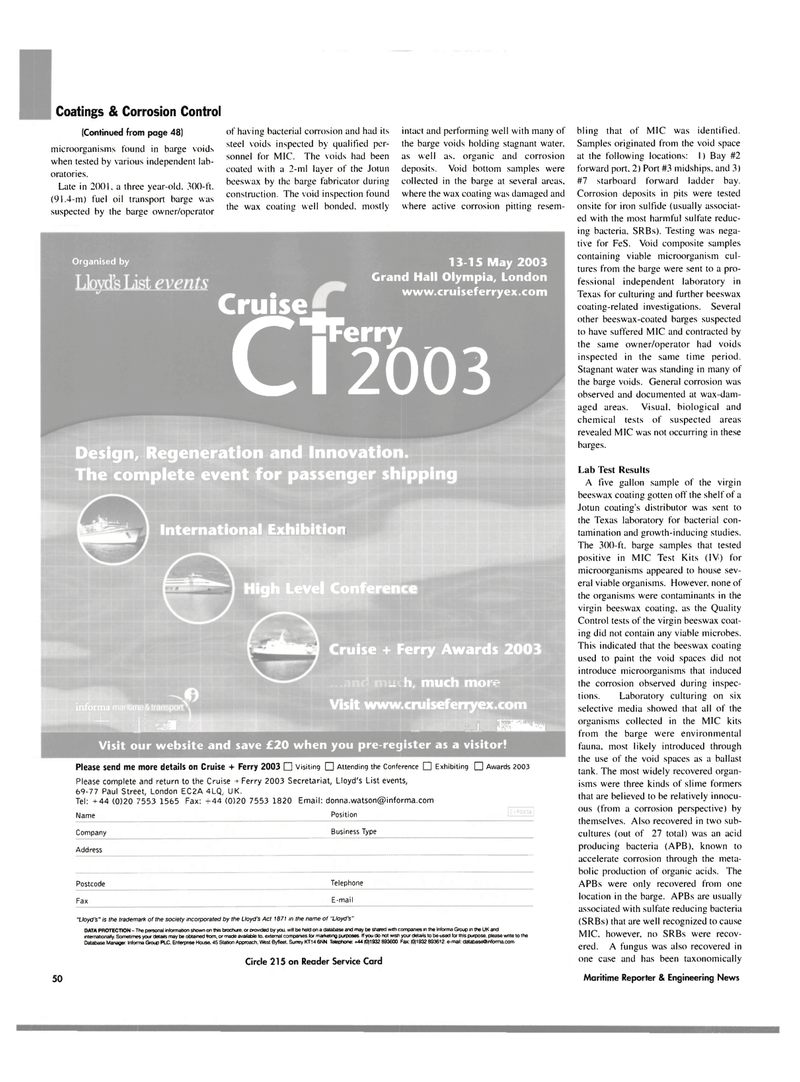 Late in 2001. a three year-old. 300-ft. (91.4-m) fuel oil transport barge was suspected by the barge owner/operator of having bacterial corrosion and had its steel voids inspected by qualified per- sonnel for MIC. The voids had been coated with a 2-ml layer of the Jotun beeswax by the barge fabricator during construction. The void inspection found the wax coating well bonded, mostly intact and performing well with many of the barge voids holding stagnant water, as well as. organic and corrosion deposits. Void bottom samples were collected in the barge at several areas, where the wax coating was damaged and where active corrosion pitting resem- bling that of MIC was identified.

Texas for culturing and further beeswax coating-related investigations. Several other beeswax-coated barges suspected to have suffered MIC and contracted by the same owner/operator had voids inspected in the same time period.

Stagnant water was standing in many of the barge voids. General corrosion was observed and documented at wax-dam- aged areas. Visual, biological and chemical tests of suspected areas revealed MIC was not occurring in these barges.

Jotun coating's distributor was sent to the Texas laboratory for bacterial con- tamination and growth-inducing studies.

The 300-ft. barge samples that tested positive in MIC Test Kits (IV) for microorganisms appeared to house sev- eral viable organisms. However, none of the organisms were contaminants in the virgin beeswax coating, as the Quality

Control tests of the virgin beeswax coat- ing did not contain any viable microbes.

This indicated that the beeswax coating used to paint the void spaces did not introduce microorganisms that induced the corrosion observed during inspec- tions. Laboratory culturing on six selective media showed that all of the organisms collected in the MIC kits from the barge were environmental fauna, most likely introduced through the use of the void spaces as a ballast tank. The most widely recovered organ- isms were three kinds of slime formers that are believed to be relatively innocu- ous (from a corrosion perspective) by themselves. Also recovered in two sub- cultures (out of 27 total) was an acid producing bacteria (APB), known to accelerate corrosion through the meta- bolic production of organic acids. The

APBs were only recovered from one location in the barge. APBs are usually associated with sulfate reducing bacteria (SRBs) that are well recognized to cause

MIC. however, no SRBs were recov- ered. A fungus was also recovered in one case and has been taxonomically

The complete event for passenger shipping

Visit our website and save £20 when you pre-register as a visitor!

DATA PROTECTION - The personal information shown on this brochire. or provided by you. wit) be heid on a database and may be shared with companies in the Informa Group in the UK and internationally. Sometimes your details may be obtained from, or made available to, external companies lor marketing purposes If you do not wish your details to be used for this purpose, please write to the