Hoegh Fleet Services A/S was sentenced to pay a $3.5 million fine for seven felony charges relating to the falsification of records concealing the intentional dumping of waste oil into the ocean. Previously, on September 25.

2003, Vincent Genovana. an engineering officer on the M/V Hoegh Minerva, pleaded guilty to falsifying documents and covering up evidence in order to obstruct or influence a U.S. Coast Guard investigation.

In addition to the fine. U.S. District Court Judge Ronald B. Leighton ordered Hiiegh Fleet Services A/S to develop and implement a comprehensive environmental compliance plan for its fleet of 38 vessels that call on U.S.

A significant part of the criminal fine.

$1.6 million, will be used to fund environmental projects that benefit, preserve and restore ecosystems adjoining the coastlines of Washington and California.

The illegal operation came to light via a crew member aboard the M/V Hoegh Minerva who blew the whistle. leading to the discovery of the bypass pipe by state and federal inspectors. Judge Leighton granted the U.S.' request that the crew member receive a $300,000 whistleblower award.

including an oil water separator to process oily water that collects in the lowermost compartments of the ship.

According to the plea agreement and other court records: Genovana directed another crew member on board Hoegh Minerva to fabricate a bypass pipe that was fitted into the existing vessel piping system for the oil water separator to allow crew members to pump inadequately treated oil contaminated waste water directly overboard into the ocean.

Crew members referred to the pipe as the "magic pipe." The magic pipe was initially installed in June 2003 while the vessel sailed between Canada and Asia.

It remained installed for several days at a time, allowing crew members to bypass the ship's pollution prevention equipment. None of the discharges were recorded in the Oil Record Book as required by international and U.S. law.

Instead, crew members knowingly made false and fraudulent entries and omissions in the Oil Record Book in an effort to conceal the illegal discharges from U.S. Coast Guard inspectors.

The magic pipe was removed several days before Hiiegh Minerva arrived at the Port of Los Angeles on September 2, 2003. Following its removal, crew members painted the fittings where the magic pipe had been installed in an effort to conceal the prior use of the fittings.

Genovana cooperated with the government.

As a result, he was sentenced in U.S. District Court in Tacoma to a 30- day term in custody, followed by two years of supervised release. 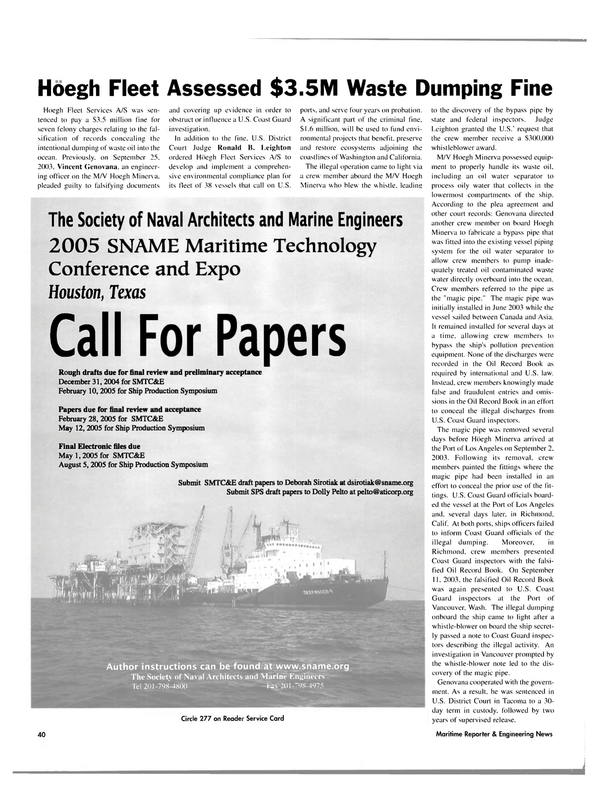